+236 is the dialing code for Central African Republic.

Political unrest, coups, civil war, corruption and mismanagement have made the Central African Republic one of Africa’s poorest countries, despite rich assets on diamonds, gold and uranium, among others. The latest wave of violence in the country was triggered in 2012 when a Muslim-dominated rebel group took power in the country for a short period. Since then elections have been held and several peace agreements have been concluded, but unrest has continued to flare up, despite the fact that the UN has troops in the country. 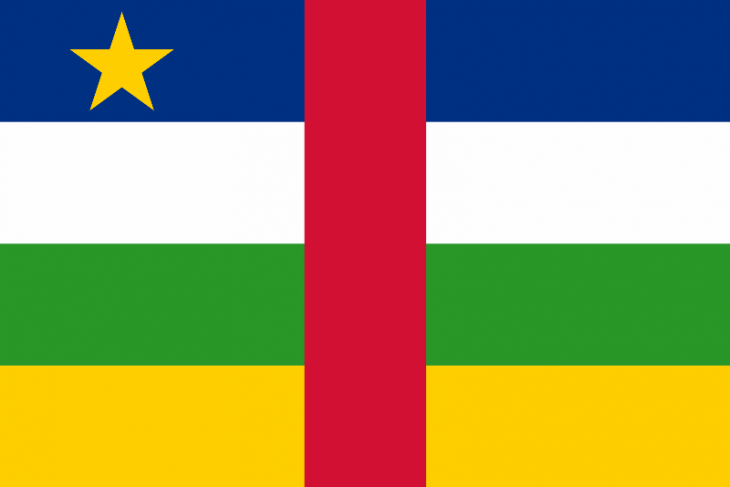 The Central African Republic is in the middle of Africa and is almost one and a half times the size of Sweden. Tropical rainforest covers the southern part of the country. Further north, the landscape is characterized by savanna.

Almost the entire Central African Republic consists of highlands at a height of 600–900 meters above sea level. The upland serves as a water divider between several water systems. The water collected in the northern part flows down as rivers in neighboring Chad and further into Lake Chad, while the water on the southern side of the highlands flows into the Ubangi (Oubangi) border river, which in turn connects to the large Congo river in Congo-Kinshasa.

There are two higher mountain areas, the Bongo massif in the northeast and the Karré mountains in the west. The latter are the highest and reach just over 1,400 meters above sea level.

In the Central African Republic, there is a tropical climate where the year is divided into a pronounced dry period and a rainy season.

During the dry season from November to March, the rainfall is scarce and it can get very hot. The rainy season between March and November brings some cooler air. In the forest areas in the south, the rain can be heavy and in the south-east large areas are under water. It is the coolest in July and August.

New violence in the north

The Central African government’s attempt to exert some control in the northern part of the country immediately suffered a serious setback. Already during the installation ceremony for Colonel Augustin Tombou, the new prefect of the city of Kaga-Bandoro, violence rises. His residence is partially destroyed and the government building burned down and Tombou himself is forced to flee to a safe place. At the same time, reports that at least seven people were killed in conflicts between two groups in the Muslim-dominated district of PK5 in Bangui.

Relief workers are killed in the north

Several aid organizations are temporarily suspending their work in the Central African Republic after a relief worker, who worked for an Italian NGO, was killed in the northern part of the country. Reports also say that about 10 people were killed in fighting between former Sélékarebeller and anti-Balaka groups near the city of Ippy. According to the UN organization Ocha, at least 14 relief workers have been killed in the country since the beginning of the year.

UN force is increased by 900 men

The UN Security Council decides to increase the peacekeeping force of Minusca by 900 men, which after it consists of 11 650 men. This has happened since UN Secretary-General António Guterres warned of ethnic cleansing in the country. The threat of violence has also increased since the Ugandan force, which with American support fought the Lord’s Liberation Army (LRA), has been withdrawn. The UN also promises measures to prevent UN soldiers from committing sexual abuse. Among other things, Guterres demands that all allegations of rape be reported to the Security Council.

The UN is investigating the peace force

The UN launches an independent investigation into Minusca soldiers’ response to the outbreak of violence in Haute – Kotto, Basse-Kotto, Mbomou and Haut-Mbomou between May and August 2017. These include incidents where civilians were killed despite UN soldiers being in the vicinity. In May, six UN soldiers and 66 civilians were sought for protection in a mosque, which Minusca had previously guarded. Among the victims were the mosque’s imam. Another incident that is being investigated is when three Moroccan UN soldiers were killed in the predominantly Christian city of Bangassou. Anti-Balaka groups are suspected to be behind the act.

Seven dead in attacks in Bangui

At least four people are killed and about 20 injured when grenades are thrown into a cafe in Bangui during a concert with singer Ozaguin. Later, three more people were killed in a revenge attack, according to a UN spokesman for Minusca.

Two rebels from the Muslim militia UPC accused of shooting and injuring a UN soldier were released in 2015 despite being counted as a violation of the laws of war. It reveals the British BBC as seen in secret documents. The UN chose to hand over the men to their commander so as not to interfere with the electoral process that was going on then, according to the BBC.

The members of Cemac (Cameroon, Central African Republic, Chad, Equatorial Guinea, Gabon and Congo-Brazzaville) announce that the internal visa-free agreement has now been ratified by all member states and will therefore be implemented. The agreement has been missing for 15 years through negotiations. The process has dragged on the time when the oil countries of Gabon and Equatorial Guinea were worried about being flooded by job seekers from neighboring countries. Now, however, these countries have also ratified the agreement.

UNHCR: A quarter of the population has been forced to flee

A quarter of Central African Republic residents, or 1.1 million people, are on the run, according to UNHCR data. But the number may in fact be even higher, says a UNHCR spokesman. This is about 600,000 internally displaced persons and just over 500,000 people who have moved to neighboring countries.

Shortcomings in the UN’s handling of reports against Minusca soldiers suspected of sexual abuse are being re-emphasized. According to documents leaked to the Code Blue organization, which works to put UN troops in charge of abuses, ten of 14 cases have only been handled by UN personnel, although it is the soldiers’ homelands that bear the legal responsibility. In eight of the 14 cases, no testimony was taken from the children who should have been abused. The reports concern soldiers from nine countries: Pakistan, Zambia, Congo-Brazzaville, Burundi, Morocco, Egypt, Cameroon, Gabon and Niger. The UN says that this should be investigated.

The Minister of Defense is allowed to go

President Touadéra dismisses Secretary of Defense Levy Yakete, who got the post despite being subject to UN sanctions for his role in the civil war in 2013. It is happening at the same time as the violence continues to escalate. On the same day, reports that fighting in different parts of the country will require at least 25 lives.

The UN warns against genocide

At least 60 people are reported to have been killed in a short time in fighting between Christian and Muslim militias in various areas of the country. The victims are reported to be six Red Cross workers. The figures are confirmed by, among other things, the UN and Doctors Without Borders. According to the UN, the circumstances surrounding the killing show “early signs of a genocide “. UN agency Oche’s chief Stephen O’Brien urges the World Organization to intervene immediately, “before it’s too late”.

New violence even in the southeast

Fighting breaks out in Zemio in the country’s southeast. Twenty-two people are killed in clashes between livestock-feeding fulani, believed to have ties to the Union for Peace in the Central African Union (UPC) formed by former Sélékarebeller, and militia groups. A further number of people are believed to have been killed since their house caught fire.

At least 100 people are killed in fighting in the city of Bria in the northeast. The fighting between rival rebel factions breaks out despite the peace agreement and the groups entered into a ceasefire as late as the day before. This is seen as a sign that the leaders of the groups have only limited control over their own forces, who are unwilling to give up the opportunity to earn money from collecting taxes or mining in the areas they control.

UN soldiers are sent home after allegations of abuse

More than 600 UN troops from Congo-Brazzaville are sent home following allegations of sexual abuse and other irregularities in the Central African Republic.

Peace treaty is signed in Rome

The government concludes a peace agreement with 13 of the 14 armed rebel groups active in the country. In exchange for this, the rebels are offered political representation on several levels. The parties announce an immediate ceasefire. The agreement, mediated by the Vatican, is signed in Rome. A group called 3R, which is active in the Northwest, is expected to sign the agreement at a later date.

A UN report on the situation in the country says that hundreds of people have been killed and at least 88,000 forced away from their homes since early May. In the second half of the month alone, 20,000 have moved into Congo-Kinshasa. A total of half a million Central Africans are refugees in the country and over 120,000 are in Congo-Kinshasa, according to the UN. The report provides shocking information about the violence in the country, with rape, murder, torture, kidnapping and recruitment of child soldiers at a level that, according to UN staff, can be described as war crimes or even genocide.

Nearly 3,000 people who have escaped unrest in the south-east of the country have crossed the border into Congo-Kinshasa, the UNHCR reports. In the Bangassou mining town on the border, Red Cross personnel have found the remains of 115 people killed during several days of militia attacks.

Attack on Muslims in Bangassou

An anti-Balaka militia attacks Muslims in the city of Bangassou on the border with Congo-Kinshasa. The UN base in the city is also attacked, which causes the Minusca leadership to send reinforcements. Up to 30 civilian fears have been killed and aid organizations cannot enter the city, which is partially controlled by the militia. Hundreds of civilians are reported to have sought shelter in a mosque.

Four UN soldiers are killed in an attack on a column 47 miles east of Bangui. According to the UN, eight of the attackers were killed in the fighting between the UN force Minusca and an anti-Balaka militia. A fifth UN soldier, reported missing, is found dead a few days later.

The Ugandan military announces that the country will take back its forces from the Central African Republic. Uganda’s army has, among other things, been hunting the leader of the Ugandan rebel movement Lord’s Liberation Army (LRA) which is said to have killed thousands of civilians and kidnapped thousands of children in the Central African Republic. The reason is stated that the LRA no longer poses a threat to Uganda’s security.

The US is imposing sanctions on two military leaders who are considered to be responsible for the chaos in the country. The sanctions mean that American companies and individuals may not do business with those blacklisted.

The UN intervenes against rebels

The UN forces intervene by helicopter to prevent the FPRC militia from attacking the city of Bambari. A spokesman for the UN force says it is acting to protect the civilian population that has been caught between the FPRC and the UPC militia, both breakaway factions from Séléka.

Rebel group is accused of massacre of civilians

An outbreak group from Séléka, the Union for Peace in Central Africa (UPC), is accused by the human rights organization Human Rights Watch of having murdered some 30 civilians in the city of Bakala in December 2016. 25 of the victims should have been killed after UPC called them to a meeting in a school. Earlier in the same autumn, at least 29 other civilians must have been killed in connection with fighting against another outbreak group from the Séléka People’s Front for the re-birth of the Central African Republic (FPRC), in the same area.