Europe’s population is concentrated in Italy, Germany, France, the United Kingdom and the Netherlands. Europe is the second smallest continent on the planet, and, its territory is quite fragmented, as it is divided into 50 countries. The total population in Europe is approximately 742.5 million residents (2013). Taking into account the limited territory of the continent, it can be said that it is quite populated, because it has a demographic density of 72.9 residents /Km 2 .

The European population has its origin ethnically linked to different peoples, especially: Anglo-Saxons, Scandinavians, Slavs, Germans and Latinos, although there are countries whose population originates from miscegenation between the aforementioned human groups.

Christianity (Catholics, Protestants and Orthodox) is the religion practiced by the majority of the European population, which is distributed irregularly in the territory. There are areas where the concentration is very high, with more than 300 residents /km 2 , and in others they have a demographic density below 1 residents /km 2 .

The most populated part of Europe is located in central-west, a region that stands out especially for industrial and commercial production. The region is home to countries such as Italy, Netherlands, France, United Kingdom and Germany.

To the north of the continent, a region close to the Arctic circle, the population is very restricted, a condition imposed by the extremely cold climate.

Among Europe’s most populous countries, Russia ranks first, with about 142 million residents, then Germany (82 million), France (64 million), the United Kingdom (63 million), Italy (61 million), Spain (47 million) and Ukraine (44 million). The highest population density in Europe belongs to the Republic of Malta, with around 1,344 residents /km 2 .

Check abbreviationfinder for list of all acronyms related to Europe.

If you are looking for the international dialing code for a particular country of Europe, you can check the following table. European countries are listed in alphabetical order. Also included are capital cities are ISO codes. To find complete information about countries in Europe, please look at Countryaah.com. 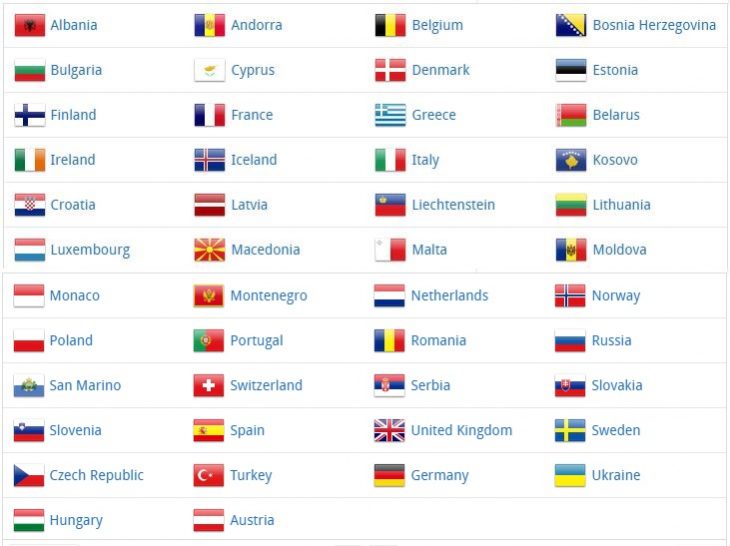 The United Kingdom, Ireland, Portugal and Iceland have assigned themselves to Western European Time (GMT / WET), which is identical to Coordinated Universal Time (UTC). It corresponds to the mean solar time at the prime meridian, which runs through London and eastern England.

The Moscow time (. Tax +3 hours) use Belarus and much of European Russia and Turkey.

Most states use a daylight saving time from late March to late October, with clocks advancing one hour over that period. This applies to all EU countries, including most of the European non-EU countries, but not Iceland, Russia, Belarus and Turkey.

The cities and municipalities form the smallest administrative units in the administrative structure of the states. Lisbon was one of the first cosmopolitan metropolises of modern times, as it was the center of a great colonial empire in the age of imperialism. In 1950, four cities in today’s European Union were among the 20 largest in the world. Since then, European cities have barely grown, and in some cases have lost their population. These four largest EU cities today were London in second place behind New York, Paris in fourth place behind Tokyo, and Milan and Naples in 13th and 19th place.

But in the second half of the 20th century, the cities of the rest of the world, especially those in developing countries, e.g. Mexico City, Manila or São Paulo, in the population and now lead the table in the world. Despite stagnation in older cities, there are numerous other processes in spatial development in the 21st century, such as the gentrification of inner cities.