Asia, part of Eurasia, is the largest continent in terms of area with around 44.615 million square kilometers, about a third of the total land mass. With over four billion people, more than half of the world’s population, this part of the world is also the most populous.

The word “Asia” is derived from the Assyrian word “Asu”. Assu means “sunrise” or “east”. So Asia points to the region in the direction of sunrise. It therefore corresponds to the Latin word Orient or the German ” Morgenland “. This is how the area of Asia Minor was called Asia in antiquity, which later gave rise to the name of the Roman province of Asia. In ancient times, the name Asia was traced back to personal names.

The continental landmass lies entirely in the eastern hemisphere and north of the equator with the exception of the Chukchi Peninsula in eastern Siberia, which lies east of the date line, and the southeasternmost islands in the Malay Archipelago, which are in the southern hemisphere of the earth.

In the west, Asia has no clear geographical or geological boundary with Europe. The most common definition of the border to Europe from north to south: the Ural – mountains, the Urals – the river, the Caspian Sea, the Caucasus, the southern coast of the Black Sea and the Bosporus, the Sea of Marmara and the Dardanelles. From the Barents Sea to the Black Sea, this border is around 2,700 km long.

With Africa Asia north of the Red Sea on the peninsula Sinai (Isthmus of Suez, 145 km wide) connected.

In the northeast, the mainland masses of Asia and North America are a little more than 80 km apart on the Bering Strait.

In the southeast the Malay Archipelago forms the connection to Australia. The southernmost point is the Indonesian island of Pamana.

Asia has a number of global geographic superlatives:

It is the continent with the most diverse vegetation, alternating from the permafrost soil of Siberia to the jungle of Southeast Asia. In addition to the extreme tundra, desert and tropical rainforest, all other vegetation zones on earth can also be found in Asia.

Another special feature are most of the world’s intercontinental states, with both Asian parts of the country and territories in other parts of the world. These include Russia, Kazakhstan, Indonesia, Japan, Egypt and Turkey.

In the Far East is the country with the largest population in the world, China, with approximately 1.3 billion residents. The Far East is also called East Asia, it is located east of the Asian continent and covers a territory that covers an area of ​​about 12 million km 2 , where the populations of China (1.3 billion), Japan (126 , 9 million), South Korea (49 million), North Korea (23 million), Taiwan (23 million), Hong Kong (6 million), Mongolia (2 million) and Macau (450 thousand).

This portion of Asia has, in a large part of the territory, a temperate climate, due to its geographical location, since it is cut by the Tropic of Cancer. This climatic characteristic is not part of the reality of a southern portion of China and Taiwan, as both are under the influence of the Earth’s torrid or intertropical zone, which receives a greater amount of sunlight, with higher temperatures.

In East Asia there are two of the few remaining countries of the socialist system: China and North Korea, remembering that the Chinese economy has already changed its configuration considerably and has been increasingly distancing itself from the principles of socialism and approaching the capitalist principles. Some countries, such as Macau, had their respective territories annexed and administered by the Chinese government, becoming administrative regions.

Check abbreviationfinder for list of all acronyms related to Asia.

If you are looking for the international dialing code for a particular country of Asia, you can check the following table. Asian countries are listed in alphabetical order. Also included are capital cities are ISO codes. To find complete information about countries in Asia, please look at Countryaah.com. 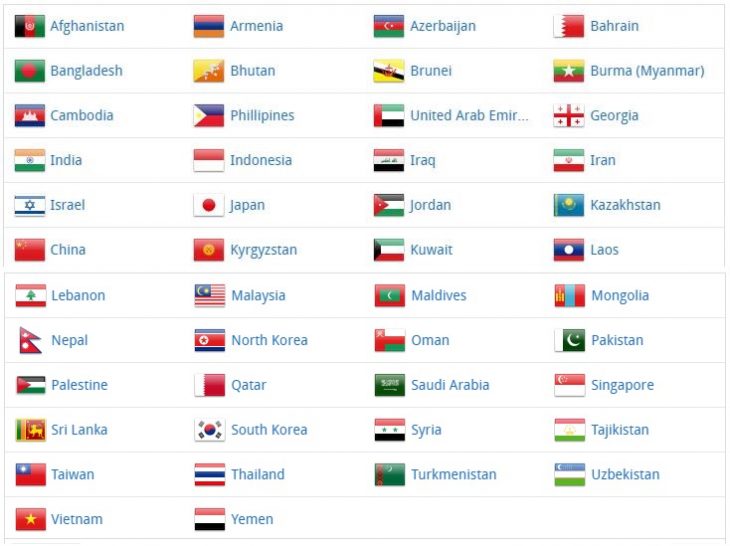