The mighty Congo-Kinshasa (Democratic Republic of the Congo), located in Central Africa with a short stretch of coast to the west towards the Atlantic, is one of Africa’s most formidable colonial creations. The country’s borders were pushed out without regard to the residents and the traditional kingdoms that were forced together. Here, there are natural resources that could have made the country one of the richest in the world, instead, during colonial times and after independence from Belgium in 1960, the residents were plagued by poverty under corrupt rulers and brutal militias. 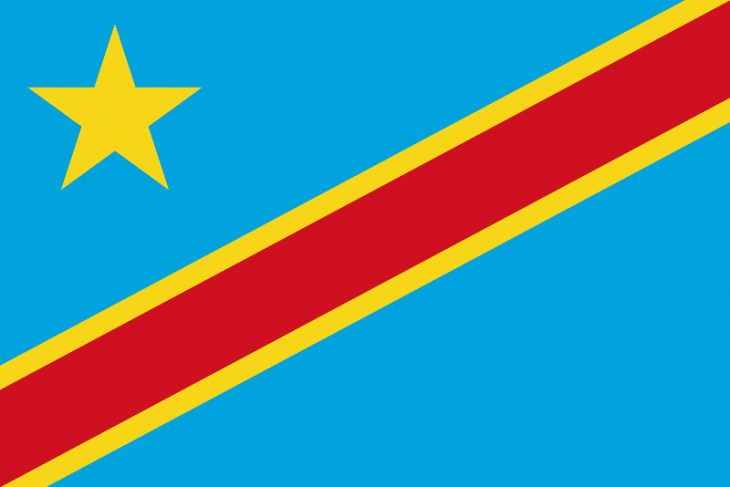 Congo-Kinshasa is the second largest country in Africa, after Algeria. It occupies large parts of Africa’s inland area and has only a short coastal distance, four miles long, at the mouth of the Congo River in the Atlantic in the west. On the surface, Congo is five times the size of Sweden and borders nine countries.

The vast basin of the Congo River dominates the country and, with its tributaries, forms a vast network of navigable waterways. The river is the world’s second largest in terms of water volume, following the Amazon River in South America, and important for water supply in Africa.

The Congo basin is shaped like an amphitheater that is open to the north and northwest and is bounded by high plateaus in the south as well as mountains in the east, including the Ruwenzori massif and the Virunga volcanoes. One of the eight volcanoes, the 3,470 meter high Nyiragongo, had a major eruption in 2002 that destroyed parts of the city of Goma.

The East African tomb of Great Rift Valley’s Randberg largely coincides with the country’s eastern border with the Great Lakes region. Lake Tanganyika is bordered by Tanzania and Burundi, Lake Kivus against Rwanda and Albertan Lake and Edward Lake towards Uganda.

The capital Kinshasa is located on the Congo River a bit inside the coast to the west. From there it is just over 150 kms of bird path to the second largest city of Lubumbashi and just as far to Bukavu at the border with Rwanda in the west.

The rainforest area that extends into neighboring countries is the world’s second largest – after the Amazon – and is important for biodiversity in the world. There are over 600 species of trees, more than 1,000 species of birds and over 1,300 species of butterflies. The forest also acts as a huge “lung” that produces oxygen and captures carbon dioxide, which is of great importance for the climate in the world.

The climate is tropical with high humidity and a relatively high temperature throughout the year. The two-thirds of the country lying south of the equator has rainy season mostly between November and March, when it is dry time north of the equator. However, there are large local variations and some areas have double periods of rainy season and dry season.

Around the capital Kinshasa, there is normally dry weather from the end of May to the beginning of October and rainy season for the rest of the year, with the exception of a few weeks in January-February. During the rainy season, the climate is pressing with heavy rain showers several times a week, often in connection with thunderstorms.

Margherita (highest part of Mount Stanley, located on the border with Uganda) (5 109 meters above sea level)

Moanga Katumbi, Katanga governor, is forced to leave the party leader post in Kabila’s party PPRD, after criticizing Kabila’s attempt to get a third term as president.

President Kabila reforms the government in order to broaden its political base. Thomas Luhaka, from the opposition party MLC, becomes one of three new deputy prime ministers. Shortly after, MLC decides to exclude three party members who have joined the government. This must have been done by order of the party leader Bemba who is in The Hague charged with war crimes (see May 2008).

Concerns in Katanga are forcing thousands to flee

Increased violence in Katanga creates new refugee flows. According to the UN refugee agency UNHCR, a total of 400,000 people have been forced to flee in the province since 2012. The unrest is among other things tensions between the two groups and the Luba in the mineral-rich northern Katanga. For much of the violence, the Mai Mai militia, Bataka Kantanga, who has committed serious abuses, including mass rape, responds to civilians.

The police are charged with extrajudicial executions

Human Rights Watch accuses Kinshasa police of a wide range of extra-judicial executions of young men in connection with criminal gang interventions at the end of 2013.

General is sentenced to prison for human rights violations

General Jérôme Kakwaku is sentenced to ten years in prison by a military court for serious human rights crimes which he committed as militia leader in Ituri from 2003 to 2005.

The Sakharov Prize to Mukwege

Congolese doctor Denis Mukwege is rewarded by the European Parliament with the Sakharov Prize for his work in helping rape victims at the Panzi Hospital in eastern Congo-Kinshasa (see also October 2012).

Thousands of people take part in protests in the capital Kinshasa. Participants oppose that Joseph Kabila plans to amend the Constitution so that he can stand for a third term as President.

The UN is imposing sanctions on the Ugandan rebel movement ADF-Nalu, citing that it is kidnapping and recruiting children as soldiers in Congo-Kinshasa, Uganda and Tanzania. ADF-Nalu is also accused of killing and mutilating people and of gross sexual violence against women and children.

Concern in the border area

Reports are coming of fighting between Congolese and Rwandan soldiers in the border area between Rwanda and Congo-Kinshasa, on par with Nordkivu.

Ready for trial against Ntaganda

The ICC now claims to have collected enough evidence to initiate a lawsuit against Bosco Ntaganda, former leader of the M23 rebels.

Human Rights Watch urges the Congolese authorities to investigate staff harassment at Virunga National Park, where there are still a few hundred endangered mountain gorillas. This is believed to be linked to plans to search for oil in and around the park. The pressures of the world lead to the oil company Soco, with its base in the UK, deciding to close the project for the time being.

The ICC sentenced Katanga to 12 years in prison

On May 23, the ICC announces that Germain Katanga militia is sentenced to twelve years in prison for war crimes (see March 2014). The six years he has already spent in custody will be deducted from the sentence.

Protest against deportations from Congo-Brazzaville

In Kinshasa there are protests against a decision in neighboring Congo-Brazzaville to expel 70,000 people to Congo-Kinshasa, whence they come, after being accused of being behind a crime wave. The deportation decision has led to violence in Congo-Brazzaville. Opposition politician Vital Kamhere criticizes the government for how it handled the issue.

Hutumilis plans to put down the weapons

Hutumilisen FDLR announces that it intends to stop the armed struggle and continue to fight with political methods. It says it wants to enter into a dialogue with the Kigali government, which has however rejected all talk of talks with the FDLR.

ICC blames militia leader Germain Katanga for war crimes in connection with a massacre of 200 civilian villagers in Ituri Province in 2003. Katanga, who belongs to the Lendu people group, was the commander of the FRPI militia.

Security forces are intervening in a mass meeting in Bukavau organized by opposition politician Vital Kamerhe, who previously belonged to President Kabila’s supporters. According to Kamerhe, who leads the Union of the Congolese Nation (UNC), the soldiers shoot at the participants, which is denied by the provincial governor.

The unrest in Katanga continues. The UN decides to send reinforcements to the province, in addition to the 450 UN soldiers already there.