Africa is considered to be the “cradle of humanity”, the continent where the development of modern humans took place. After a very eventful history, from one of the earliest advanced civilizations of mankind in ancient Egypt to the emergence of various great empires and the later colonization by European states, the state borders that are largely valid until today were formed in the course of the decolonization in the 20th century. These are seldom congruent with the settlement areas of the numerous, often very heterogeneous peoples of Africa, which contributes to various conflicts and wars. While the states of Africa do not play a major role in the world economy, the continent’s natural resources and agriculturally usable areas are of increasing importance and lead in individual regions to new, above all economic.

In ancient times, the Latin name Africa only referred to the area of ​​the Roman province of the same name in what is now Tunisia, the continent (initially only North Africa west of the Nile) was often called Libya in ancient times. The name Africa was first used by the Roman senator and general Scipio Africanus, the conqueror of Carthage. It is derived from the Latin word Afer (plural: Afri), which means something like “Afrikaner, Punier”, and could be derived from a local tribe or from the Hebrew ʿafar (“dust”), the Greek aphrike (“unkalt ”) or the Latin aprica (“ sunny ”).

Africa is surrounded to the north by the Mediterranean Sea, to the west by the Atlantic Ocean, to the east by the Indian Ocean and the Red Sea. The coastline is 30,490 km, which is relatively little compared to the large area. The only land connection to other mainland masses is to Eurasia at the point of the Sinai Peninsula, which lies between Africa and the Arabian Peninsula. Europe is closest to Africa on the Strait of Gibraltar and the Strait of Sicily. The southernmost point of Africa is Cape Agulhasat 34 ° 50 ‘south. The African continent is only slightly divided; it has fewer islands and peninsulas than any other continent.

Africa has a total of 54 countries. The smallest state on the mainland, Gambia, is about the size of Cyprus and the largest, Algeria, about seven times the size of Germany. The largest island is Madagascar, which lies off the southeast coast of Africa in the Indian Ocean (Indic).

AIDS is currently seen as a threat to the African continent, it is an unforeseen tragedy that plagues most countries, as it lowers their birth rates.

AIDS is a contagious disease that can be acquired through sexual intercourse without using condoms, blood transfusions, injectable drugs with used needles. Still without a cure, it affects millions of people in sub-Saharan Africa, the problem is so serious that one out of every five deaths is due to AIDS.

In Zambia and South Africa, about 20% of the entire adult and young population is infected with the disease; in Botswana, about 39% of the population between 15 and 49 years old have the disease and in Lesotho and Zimbabwe, the percentage is 20%, these are data from WHO (World Health Organization).

The Kenyan government, faced with the scourge caused by the disease, naively suggested that the population stop having sex for a period of two years. According to the government, this time would serve to slow the spread of the virus, since among the population of 30 million residents, 3 million are infected.

The rate of infected people is growing in 2001, approximately 5.3 million people contracted the disease, of which, according to WHO, less than 1% underwent treatment, the rest probably dying without even knowing they had the disease.

Check abbreviationfinder for list of all acronyms related to Africa.

If you are looking for the international dialing code for a particular country of Africa, you can check the following table. African countries are listed in alphabetical order. Also included are capital cities are ISO codes. To find complete information about countries in Africa, please look at Countryaah.com. 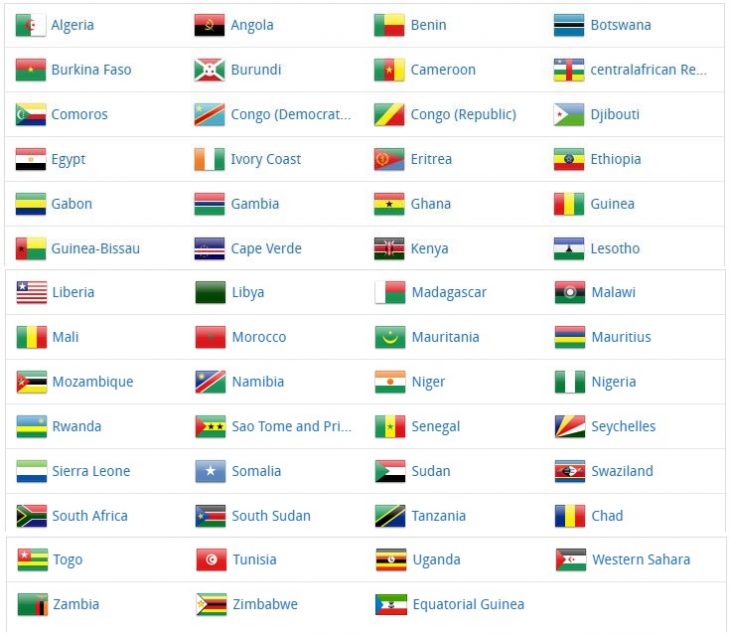