Mali in the interior of West Africa is a country with rich cultural traditions since the Middle Ages. Mali was a relatively stable democracy from 1992, when multi-party systems were reintroduced after many years of dictatorship, and until a new military coup in March 2012. Despite economic reforms, Mali has remained one of the world’s poorest and most aid-dependent countries. After the 2012 coup, the country has been plagued by a prolonged conflict with Tuareg separatists and Islamist terrorists who have claimed thousands of lives and forced hundreds of thousands to flee. 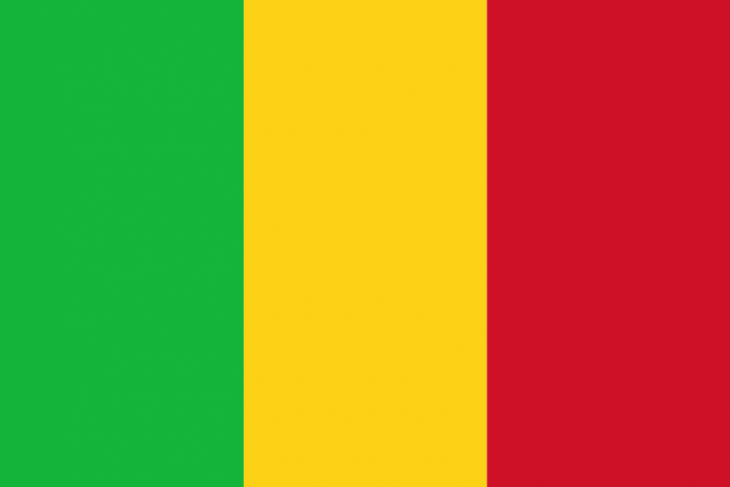 Mali is located in West Africa and is almost three times the surface area of ​​Sweden. The country lacks coast and is surrounded by seven neighboring countries. Mali consists mostly of desert and semi-desert. The climate is hot and dry throughout the country.

Northern Mali is part of the Sahara. South of the desert, barren pastures in the Sahel outskirts of Sahel take over. The Niger and Senegal rivers mean that southern Mali is relatively fertile and where the majority of the population lives.

The fish-rich Niger is an important transport route and forms a wide inland delta in central Mali. The river regularly floods over and water and fertilize when cultivations, including rice, in the delta. At the far south is a smaller area with tropical rainforests.

In the Sahara desert in the north it rains very rarely, some years no rain falls at all. In the Sahel area further south, the climate is less dry and the average temperature is slightly lower. In the southernmost part of Mali, the Niger and Senegal rivers make the climate more humid. There, the rainy season lasts from June to October.

About 170 people are taken hostage in a luxury hotel in Bamako and 22 die before the nine-hour drama ends, when Malian elite soldiers supported by French and American soldiers storm the hotel. Two of the dead are terrorists, most of the other foreign hotel guests. al-Murabitoun also takes on this deed (see March and August 2015) and says it was performed in collaboration with Aqim.

Islamist leader Iyad Ag Ghaly condemns the peace agreement signed by a number of rebel movements with the state and calls for new attacks on French targets.

The UN warns of a famine disaster

The Humanitarian Aid Coordination Agency, Unocha, is warning that many relief efforts are not reaching northern Mali due to the violence. According to Unocha, tens of thousands of children are at risk of dying from malnutrition. Over three million people in Mali depend on food aid and for over 400,000 the situation is acute.

Other violence in August

During the month, eleven soldiers from the National Guard are killed in an attack on their location near Timbuktu, and just over ten people die when a government-run militia occupies a Tuaregically dominated city of Anefis. After a few weeks, the militia agrees to leave Anefis following a direct order from the president.

Thirteen people, including five UN employees, die in connection with the attack that goes on for a day against a hotel in Sévaré. This is the first time the violence has reached the city of central Mali. al-Murabitoun takes on the deed. The government loyal militia alliance The platform occupies the Tuaregically dominated city of Anefis after battles that require at least ten lives. The takeover of the city by the government side causes the Tuaregans to step down from the internationally appointed committee to oversee the peace agreement. The agents urge the Platform to leave the city, but the militia refuses, which is considered to threaten the entire peace treaty.

Ousmane Oumarou Sidibé, a member of the opposition party URD and former minister, is appointed head of the newly established Truth, Justice and Reconciliation Commission, which will investigate abuses in the country between 1960 and 2013.

At least six Burkina Faso soldiers are killed in an ambush between the cities of Timbuktu and Goundam. The Islamist group Ansar al-Din takes on the responsibility, as well as for several other recent attacks against army unions and UN soldiers.

Peace agreement with the entire CMA

In accordance with previous promises, the rebel organization signs the peace agreement. Among other things, the agreement stipulates that regional popular assemblies should be elected in general elections. The rebel soldiers must be included in a security force for the northern regions and the residents of the north should be given increased representation in government agencies. However, there are no promises of autonomy for the northern provinces or a federal state condition.

The UN forces’ Danish commander Michael Lollesgaard says the squad cannot work effectively. According to Lollesgaard, the soldiers have neither the training, access to necessary logistics nor the support of intelligence tasks that would be required.

Suspected jihadists temporarily occupy an army base near the Ivory Coast border, which draws particular attention as Islamists rarely act in southern Mali. A police officer is killed in connection with the attack. In western Mali, a total of at least twelve people are killed when a rebel group attacks the city of Nara.

Peace agreement with parts of Tuaregallians

The peace agreement is signed by the government, three government loyal militias and two smaller groups within the Tuareg umbrella organization Azawad’s Unified Movement (CMA). Most of the CMA, however, is absent from the ceremony in Bamako.

According to the Auditor General’s review of the state’s finances for the financial years 2010 and 2011, the equivalent of approximately SEK 2.2 billion was wasted through corruption and economic mismanagement during this period, the last two years of former President Touré’s rule (see March 2013).

CMA kills several soldiers during the month. French special forces kill four jihadists, two leaders: one in Aqim and one in Ansar al-Din. The UN reports that the fighting in four weeks forced nearly 60,000 people from their homes. As a result, over 100,000 residents are on the run in the region. Some have crossed the borders to neighboring countries, from where refugees have otherwise begun to return home. French military and UN soldiers are increasingly involved in the conflict. In total, nearly 50 UN soldiers have been killed in two years.

A man held hostage by Aqim since 2011 has been fired by French soldiers in northern Mali. Two terrorists are killed and two arrested. Swede Johan Gustafsson, who was abducted at the same time, is still being held (see November 2011).

Several dozen people are killed in attacks and fighting during the month. At a suicide bombing in Gao, at least three civilians die when an assailant tries to drive into a UN camp and two drivers are shot dead when a car column with supplies to Minusma is attacked. Battles are raging among others near Menaka in the north and Léré near the border with Mauritania.

A Red Cross employee is killed and one injured when an auxiliary transport is shot in northern Mali. Jihadi movement Mujao says it was behind the attack.

Terrorist action against nightclub in Bamako

Five people, including two Europeans, are killed in the armed attack on a nightclub in Bamako. The attack is interpreted as a terrorist attack against foreigners and the Islamist group al-Murabitoun says it is behind the attack.

The government and some of the rebel groups sign a preliminary peace agreement granting the country’s northern “Azawad” far-reaching autonomy. But in the middle of the month, the rebels say no to the agreement on the grounds that the causes of the conflict will not go to the bottom. At the same time, they say they want to continue negotiating, which the government, however, rejects. Thus, the future of the peace process seems uncertain.

New round of peace talks

The government, rebels and the loyalist militia start new talks in Algiers. Islamists linked to al-Qaeda do not participate in the negotiations.

The announcement from the government and the UN that the Ebola danger is over comes as it has been 42 days (double the incubation period) without any new case being detected.

Most of the Swedish part of the UN force arrives in Timbuktu, where it is mainly to work with intelligence activities. In total, the Swedish force will amount to 120 soldiers and officers.

Prime Minister Moussa Mara and his entire government resign. President Keïta appoints Modibo Keïta as new Prime Minister. Modibo Keïta, who is not related to the president, was former prime minister for a few months in 2002.

At the beginning of the month, the mayor of a small town in the Gao region is killed in an ambush that also calls for the death of his son. Near the Mauritanian border, at least seven soldiers are killed when Islamists attack the city of Nampala. About ten people, including the perpetrators, are killed when three suicide bombers from a government-friendly militia attack a guerrilla camp outside Kidal. Three people are killed during a protest against the UN in the city of Gao. According to eyewitnesses, they are shot by UN soldiers trying to disperse the crowd.