+504 is the dialing code for Honduras.

The Central American state of Honduras is among the poorest in Latin America. The country is said to be the origin of the term “banana republic” – a small poor country that is dependent on any single export commodity, ruled by a corrupt elite and largely controlled from abroad. Banana and coffee exports have long been completely dominant and the military ruled with strong support from the US government and US large companies. More recently, the country has had civilian leaders, although a popular president was ousted by the military in 2009. 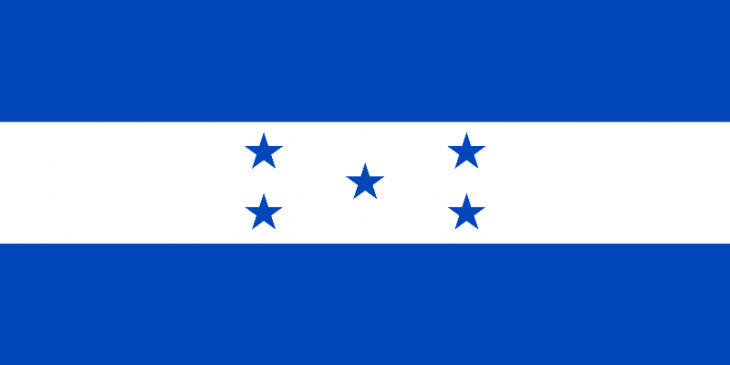 Honduras is located in the middle of Central America and is about a quarter as big as Sweden. The country has a long, low coast towards the Caribbean in the north.

Inland the hills rise into mountains with heights of almost 3,000 meters above sea level. The mountains are replaced in the south by a narrow coastal strip at the Gulf of Fonseca in the Pacific. Deep river valleys cut through Honduras, whose name comes from the Spanish word for deep, hondo.

The climate in Honduras is tropical with a lot of rain and with small temperature differences between seasons. The highlands have two rainy periods, May-July and September-October. On the coast in the north it rains most in December and January.

Honduras are often hit by storms and floods. In 1974, Hurricane Fifi claimed about 10,000 casualties and in 1998, approximately 7,000 people perished in Hurricane Mitch and the subsequent skies.

The Nationalist Party wins the election

Shortly after the election, Xiomara Castro de Zelaya proclaims victorious based on an election poll conducted by her party Libre. Shortly thereafter, Juan Orlando Hernández proclaims to be victorious after the electoral authority left with the first results. Both Castro and the Anti-Corruption Party’s Nasralla provide evidence of electoral fraud and require a recalculation of the votes and the electoral authority agrees to review results from 16,000 polling stations. Three weeks after the election, it is stated that Hernández won with 37 percent of the vote, against 29 percent for Castro, 20 percent for Mauricio Villeda (Liberals) and 13 percent for Salvador Nasralla (Anti-Corruption Party, PAC). In the National Congress, the Nationalist Party remains the largest, but backs from 71 to 48 seats. Next largest will be the newly formed Libre with 37 seats. The Liberal Party goes from 45 to 27 seats. The PAC also takes a seat in Parliament and receives 13 seats. The turnout is record high; 61 percent of voters vote. International election observers declare the elections valid.

Great uncertainty among voters ahead of presidential elections

In a final poll before the November election, nearly a third of those polled say they do not know who to vote for, or do not want to state. Nationalist candidate Hernández now has a small lead for Libres Xiomara Castro de Zelaya. It is obvious that the Nationalist Party has managed to gather its grass roots while the opposition stands divided.

The National Congress approves the formation of a new military police force of 500 men to fight civil crime in the country’s three largest cities.

Officers are dismissed but get the job

1,400 police officers who, among other things, fight the youth gang are fired, but informed by the media. They occupy the police headquarters and then get their jobs back. The cleansing of the police that started in 2011 has completely failed and only a few police officers have actually lost their jobs.

Seventeen people die in a firefight between two rival drug gangs in La Mosquitia on the Atlantic coast, in a known transit area for cocaine smuggled from South America to the United States.

The two most notorious criminal youth gangs, Mara Salvatrucha and Mara 18, agree to enter into a ceasefire with the state. The goal is to reduce the violence in the streets. The settlement differs from that in neighboring El Salvador in that the gang included a cease-fire with each other, but not with the state. In Honduras, the initiative fails as the government does not take up the ceasefire.

The Minister of Security is replaced

President Lobo again replaces his Minister of Security. The Foreign Minister is appointed as new Minister, who is replaced by his Secretary of State. The former security minister joins the president’s staff. At the same time, the National Assembly dismisses the Prosecutor General and replaces him with a commission of four people. Again, the independence of the Supreme Court is threatened.