Zambia in southern Africa’s inland can attract visitors to the World Heritage-listed Victoria Falls and several other national parks with rich wildlife. The country is one of the world’s leading copper producers. It has been both a blessing and a curse to the residents, whose prosperity is dependent on the copper price. Today, Zambia is considered a lower middle-income country, while at least half the population lives in poverty. 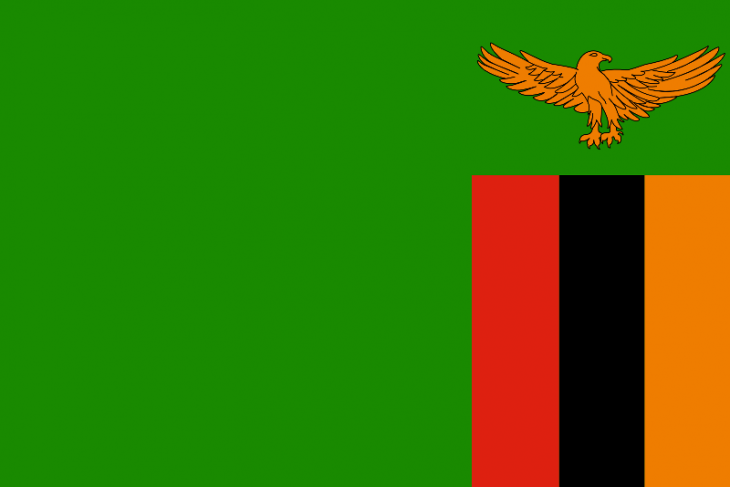 Zambia, on the surface, is slightly smaller than Sweden and Norway together, and lies about ten latitudes south of the equator on the South African high plateau. The country lacks coast and borders eight countries: Angola, Congo-Kinshasa, Tanzania, Malawi, Mozambique, Zimbabwe, Botswana and Namibia.

Actual mountains are mostly found only on the Nyika Plateau near the Malawi border in the northeast, where some peaks reach over 2,000 meters in height.

Most of the highlands are covered by sparse savanna forest and grassy savanna. The eastern two-thirds of Zambia, as well as the country’s western border with Angola and Namibia, where the Kalahari Desert begins, have mostly barren soils. The fertile land is found mainly along the largest rivers.

The Zambezi River, which has given the country its name, has its sources in the northwest corner of Zambia. It then flows through western Zambia and then forms a natural border with Zimbabwe in the south. Zambezi is surrounded by fertile plains and marshland. Near the town of Livingstone to the south are the mighty Victoria Falls. To the east of Livingstone lies the Caribou Dam and the artificial Caribas Lake. To the north, Zambia encloses Lake Tanganyika’s southern tip. A little south of it lies Lake Bangweulus and Bangweuluträsken, one of the world’s largest swamp areas. To the west of the Bangweul outcrop, the Luapula River, which forms a border with Congo-Kinshasa, flows before it culminates in Lake Mwerus in the north.

Zambia has a tropical climate divided into three seasons. From May to August the weather is dry and relatively cold, and from September to November it is dry and warm. This is followed by the long rainy season between December and April when it is warm and humid.

Most precipitation falls in northern Zambia, where the rainy season lasts about six months and where on average 1,400 mm of rainfall is measured per year. In the south, it rains about half as much.

In the valleys, the heat can be oppressive just before the rainy season, but otherwise the temperatures are generally at comfortable levels due to the fact that the country is mostly highlands (May-August between 14 and 26 degrees, September-April between 26 and 32 degrees). However, the differences in temperature are large between day and night.

The government is taking action against budget deficits

The government announces that it is planning austerity measures to counter an increasing budget deficit. The subsidies to agriculture should decrease while increasing fuel and electricity prices. Planned road construction is canceled and government officials are urged to make only necessary trips.

President Lungu appoints Richwell Siamunene of the opposition party UPND as Minister of Defense, a post Lungu himself retained after becoming president in January. Siamunene belongs to the Tonga people in the Southern Province, where the residents feel neglected by the government of Lusaka.

A court acquits singer Chama Fumba, who is charged with defaming President Lungu in a song text (see June 2015). Fumba, known as Pilato, risked six months in prison or a fine.

The government cuts royalty fees paid by foreign mining companies to the Zambian state. The sharp increases introduced at the turn of the year triggered sharp protests from the mining companies. After the latest adjustments, open pit mines pay 9 percent instead of 20 percent in royalty fees, while underground mines pay 8 percent compared to the previous 6 percent. A corporate tax is also reintroduced. The increases are intended to reduce the deficit in the state budget.

Zambia and 25 other countries agree on a new Tripartite Free Trade Area, which covers most of Africa, from Egypt in the north to South Africa in the south. However, before the agreement can come into force, further negotiations are needed and the agreement is approved by the parliaments of the countries.

Musicians are arrested for regime-critical piece of music

Musician Chama Fumba is arrested by police after he composed a song depicting President Lungu as a drinker, unable to control the country. Fumba is charged with disrupting the public order, a crime that can result in six months in prison.

Ex-President is released from charges

Bwalya joins its party with PF

Opposition politician Bwalya dissolves his party Alliance for a Better Zambia and announces that it will be merged with PF.

President Lungu collapses at a political meeting in Lusaka. Fears are raised if the country has been given another sickly head of state. It turns out that he suffers from an esophageal disease (achalasia) and he is operated on in South Africa.

Mining minister is convicted of bribery

Former mining minister Maxwell Mwale is sentenced to one year in prison for bribery in connection with a Chinese mining company being granted a number of permits in 2009. He appeals and is released on bail in March.

Iren Mambilima is appointed chairman of the Supreme Court

Lungu takes over as president

Lungu will take office as President on January 25, and will hold office until regular presidential elections are held in September 2016. Lungu quickly resigns with Guy Scott.