Wyoming is an American state located in the Rocky Mountain States region. The state is limited to the state of Montana to the north, South Dakota and Nebraska to the east, Utah and Colorado to the south, and Utah and Idaho to the west. Although it has the tenth largest territory in the United States, Wyoming has the least population and, consequently, one of the lowest population densities.

One of the reasons for this may be its geographical location, since it is not located close to the coast. Its geography is characterized by plateau regions and mountainous areas. Wyoming is home to the largest nature reserve in the United States: Yellowstone National Park.

Much of its territory is arid and receives less than 250 mm of rain per year. For this reason, temperatures in the State tend to be more extreme than in other regions of the country, resulting in a great thermal amplitude.

The population of the State is mostly composed of whites (88.9%), mainly Germans and English, and Protestants (53%). Wyoming’s capital and largest city is Cheyenne, which has a relatively small population: 55,362 residents (2005).

Map of Area Codes in Wyoming 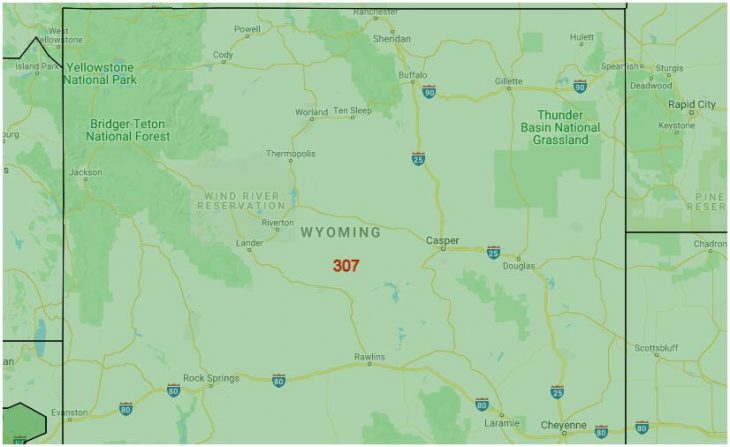 Wyoming consists of the following area codes. Click on the area code to show the cities in that area code.

The area code of 307 is used in the following 23 counties: