Vermont is a state located in the northeastern United States, bordering Canada to the north and New Hampshire to the east, Massachusetts to the south and New York to the west. With just over 600,000 residents, Vermont is the second least populous state in the country. Its name comes from the French expression Verts Monts, which means “Montes Verdes”, a reference to the extent of its forests, which cover about 77% of its territory.

The region of Vermont was initially dominated by France, having passed to British control after the creation of the Treaty of Paris, signed in 1763. In 1777, the territory proclaimed itself independent, having even been the first state to abolish slavery. Finally, Vermont joined the Union in 1791, becoming the 14th American state.

The state has the largest percentage of forested areas in the country, as well as having one of the largest lakes in the United States, Lake Champlain. Vermont has a temperate climate, with mild summers and very cold winters. The state’s average annual temperature is 6ºC.

It has a very low GDP for the American reality: 23 billion dollars. In fact, Vermont is the most rural state in the United States. Thus, its main sources of wealth are agriculture, fishing and tourism.

Although the population has grown by 8.1% since 1990s, the state still has a very small population. The five largest ethnic groups present in the country are English, Irish, French, German and French Canadian.

Map of Area Codes in Vermont 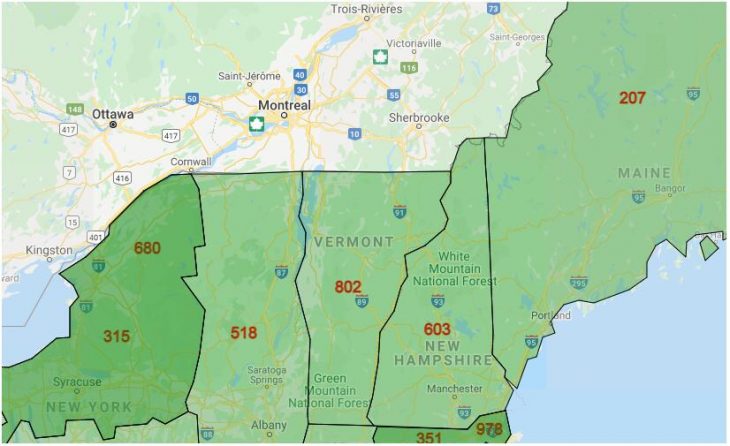 Vermont consists of the following area codes. Click on the area code to show the cities in that area code.

The area code of 802 is used in the following 14 counties: