+992 is the dialing code for Tajikistan.

Tajikistan is located in Central Asia and consists of nine tenths of hard-to-reach mountain terrain. The country was part of the Soviet Union until its dissolution in 1991. During the 1990s, a civil war raged between the Moscow-based government army and an alliance of Islamists and nationalists. Tajikistan has major economic problems that are exacerbated by the fact that it is a transit country for drug smuggling from Afghanistan. A cult of personality has been built around President Emomali Rahmon, who has ruled the country since 1992. 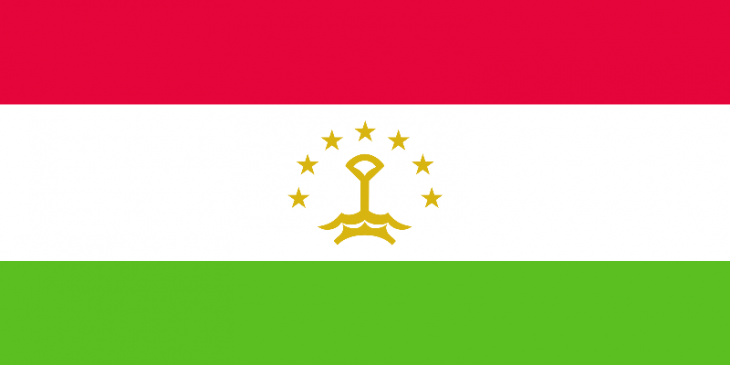 As one of countries that start with T, mountain country Tajikistan is located in Central Asia and is about a third as large as Sweden. The country has a mainly inland climate, with large differences in temperature between summer and winter. The climate also varies greatly with the height above the sea.

Tajikistan has borders with Uzbekistan and Kyrgyzstan in the west and north, China in the east and Afghanistan in the south. Most of the country consists of mountains. More than half of the land area is more than 3,000 meters above sea level.

The majority of the population lives in two more low-lying areas in the western part of the country. In the northwest, a narrow country end extends north and into the fertile Fergana Valley. The city of Chudzhand is the center of the region and is located at the entrance to the valley, which is shared between Tajikistan, Kyrgyzstan and Uzbekistan. Fergana is one of Central Asia’s most fertile and densely populated areas. High mountains separate the area from the country’s southwest, where the capital Dushanbe lies as well as the larger cities of Kulob and Qurghonteppa (formerly Kuljab and Kurgan-Tjube with more Russian form).

The eastern half of Tajikistan consists mainly of the autonomous area of ​​Köhistoni Badachsjon (formerly called Gorno-Badachshan) with the capital Chorog. It is a poor, isolated and sparsely populated area, located almost entirely in the high Pamir Mountains (roof of the world). There are mountain peaks over 7,000 meters. The Fedtchenko glacier is the largest in the world outside the polar regions. A large number of rivers flow from the mountains, which provide both electricity and the opportunity for small cultivations along the slopes.

Most of the long border with Afghanistan in the south is the Pandzh River, which becomes Amu-Darja when it merges with Vachsj in the southwest. Amu-Darja, the largest river in Central Asia, then flows through Uzbekistan into the Aral Sea.

The annual rainfall is not great anywhere, but snow in the mountains can make it impossible to get along for long periods.

On a visit to China, President Rahmon signs an agreement with the province of Henan on investments of $ 800 million in Tajik agriculture. Preliminary agreements must also have been concluded on Chinese investments in a gas pipeline, a hydroelectric plant and a railway in Tajikistan.

The opposition Movement Group 24 (see December 2012) is believed to be behind a call via social media to demonstrate against the regime. There is not much that indicates any major support, but the authorities are responding strongly. Several relatives of one of the movement’s exiled leaders are arrested by police, for a few days hundreds of internet sites are blocked and it becomes temporarily impossible to send text messages. Group 24 is declared illegal by the court.

Since Moscow halted imports of goods from the Western world, in response to its sanctions on Russia, the government of Dushanbe states that Tajikistan’s exports of fruits and vegetables to Russia should increase substantially.

A summit within the regional cooperation organization SCO (see Foreign Policy and Defense) is held in Dushanbe. Rahmon discusses increased trade and other economic cooperation with his Russian colleague Vladimir Putin, and makes a joint statement with China’s President Xi Jinping on deepening cooperation with the neighboring country in the east.

Tajikistan enters into an agreement with a Chinese company to set up a 700,000-square-foot Sino-Tajik industrial zone to accommodate around 180 companies.

The country’s highest religious leader, Grand Mufti Saidmukarram Abdulkodirzoda, states in a fatwa (religious injunction) that it is “a great sin to criticize the rulers”. Fatwan is proclaimed by all to be judged in consultation with the government, which is troubled by the radicalization among Tajik youths.

The Supreme Court sentenced seven men to prison for between 18 and 22 years for planning a terror attack on the Talco aluminum plant, the largest in Central Asia. All are ethnic uz cups and reside in the district where Talco is located. At least one of them must have been employed by the company.

Worried about the border province

New unrest is reported in Köhistoni Badachsjon following a clash between police and suspected drug smugglers.

The Islamic renewal party’s leader in Köhistoni Badachsjon, Saudatsjo Adolatshuyev, is arrested and accused of being stirred up for “religious enmity”. The regime’s pressure on the party seems to be increasing.

The media organization Asia Plus and editor Olga Tutubalina are sentenced to publish an apology and pay a fine since she quoted Lenin in connection with criticism directed at the country’s intellectual elite, which she finds too disappointing against Rahmon.

Eight are injured in firefighting in the enclave

A total of eight guards on both sides of the border are injured when gunfire erupts in Voruch, a Tajik excavator in Kyrgyzstan (see April 2013).

The mayor of Dushanbe forbids music that is “foreign to national and universal human values” from being played within the capital’s general transport system. This applies, among other things, to songs that commemorate crime, which make sexual allusions or which propagate for “non-traditional Islam”.