Sudan was created by British colonial power without regard to ethnic or religious differences between the north and south. The main purpose was to gain control over the Nile for irrigation in Egypt. When the country became independent in 1956, nearly 50 years of civil war followed. A peace agreement between north and south was concluded in 2005 and in July 2011, Sudan was finally divided. Then South Sudan became the independent state of South Sudan. However, a number of disputes about border demarcation and distribution of resources remain between the two neighboring states. 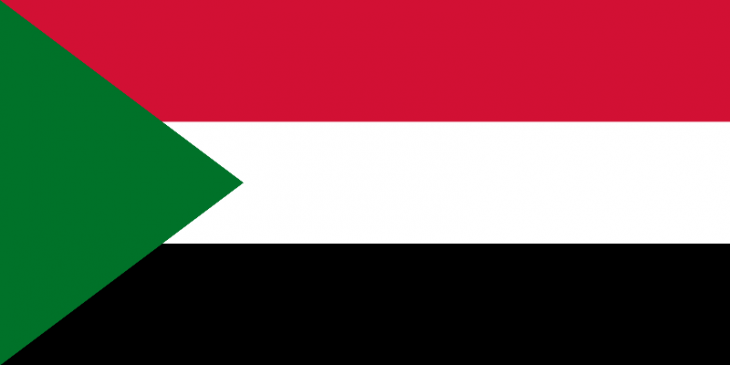 Sudan is on the surface Africa’s third largest country, just over four times the size of Sweden. It is located in northeastern Africa with a short coast to the Red Sea in the northeast. A large part of the country is dominated by the Sahara Desert, but the south gradually takes over the bush water. The climate is tropical hot, especially in the deserts in the north.

The name Sudan was coined by medieval Arab geographers: carved as-sudan (the land of the blacks). In this older sense, Sudan does not mean a single country but the entire geographical transition zone that separates the Sahara from the rainforest belt south of it.

Most of Sudan is a lowland here and was broken by mountain ranges and high plateaus. The highest mountains are in the middle of the Darfur Plateau to the west. In the southern Kurdufan plain (also spelled Kordofan) lies the Nuba Mountains. A mountain range also runs just inside the coast.

Historically, there has been no clearly defined boundary between what was previously northern and southern Sudan. Even after the country’s division in July 2011 (see Modern history), Sudan and South Sudan dispute, among other things, on which side the oil-rich district of Abyei should belong.

The Nile, the world’s longest river, flows through Sudan from south to north. Two of its main arms, the White Nile and the Blue Nile, merge into the capital Khartoum. The White Nile reaches Sudan from Uganda via South Sudan. The Blue Nile flows in from Ethiopia to the southeast.

The desert climate in the north is hot, although the winter nights there can get chilly. The average temperature varies between 23 and 34 degrees. In the mountains, however, the temperature can fall below 20 degrees in December and January.

Usually, the Sudanese can only expect rain in July and August. In the far north, almost no precipitation falls at all due to wind gusts from the northeast. Between April and June sand storms (habu) occur, especially around Khartoum. These are often accompanied by rain showers.

The UN representative in Sudan says that nearly 1.9 million people are homeless in the region and that another 1.3 million darfurians are suffering severe hardship due to lack of food and security. The UN says it has received just over half as much money as the organization has requested for humanitarian efforts in Darfur.

A number of senior ministers may leave room for younger abilities. The country’s first vice president, Ali Taha, who led the negotiations that resulted in the peace agreement in 2005, is replaced by Bakri Hassan al-Saleh, former Minister of the Interior and Defense. Defense Minister Abdelrahim Muhammed Hussein, who, like the president, is wanted by the International Criminal Court (ICC) in The Hague, is allowed to keep the job.

The group of politicians who broke with the NCP in October 2013 apply to register a new party, the Movement for Reform now. As party leader, Ghazi Salahuddin Atabani, former adviser to al-Bashir, emerges.

The Khartoum government announces that the army is launching an offensive to crush all rebel movements in Darfur.

Half a million new refugees in Darfur

According to the UN agency Ocha, fighting has driven at least 460,000 people from their homes in 2013. They are escaping clashes between ethnic and clan-based militias as well as between the Sudanese army and armed rebel movements.

The UN accuses the Sudanese army and the SPLM-N rebel movement of refusing to admit medical personnel in South Kurdufan and the Blue Nile to vaccinate around 160,000 children against polio.

The government’s harsh blow against protesters (see September 2013) has political consequences. NCP members who are critical of the police’s actions announce that they should break out of the government party and form a new party.

The residents belonging to the Dinka people carry out a “referendum” on their future status on their own initiative. Neither the Government of Sudan nor South Sudan recognize the vote as legitimate. AU condemns it as “unacceptable and irresponsible”. Since only Dinka, which has a strong connection to South Sudan, participates in the vote, the result is not unexpected that more than 99 percent want to join Abyei in South Sudan.

Flights between Khartoum and Juba

A first commercial airline opens between Juba in South Sudan and Khartoum.

Dozens of dead in rattlesnakes

Demonstrations against rising fuel prices in Khartoum and other cities become violent as police try to disperse the crowds. Information on the number of deaths varies between different sources. According to human rights organizations, around 50 people are shot dead by the Khartoum police force. The Sudanese Medical Association states the number of dead to 210, including people shot to death. Authorities state the death toll 34, and blame the SRF rebels who have, according to the government, infiltrated the demonstration trains. Islamists and members of the NCP urge the government to withdraw the decision on price increases.

According to the UN, fighting between the Arab clans rezeigat and maaliya in eastern Darfur requires around 190 deaths.

Struggles between ethnic militias in Darfur require almost 100 casualties. Leaders of the misseriya and salamat groups accuse each other of having started the conflict. Rivalry over land, water and minerals often triggers armed fighting in Darfur.

Seven Tanzanian soldiers in the UN and AU Joint Peace Force Unamid are killed in an ambush in Darfur. The loss is the worst since the force was deployed five years earlier.

Relations with South Sudan are deteriorating

Sudan accuses South Sudan of supporting SRF guerrillas and threatens to stop oil exports from South Sudan via Sudan unless support for the rebels ceases. At the same time, South Sudan accuses Sudanese troops of having entered South Sudanese territory. Sudan freezes agreement with South Sudan on security issues and economic cooperation. However, the crisis is being controlled at the last moment and oil transport can continue.

Demonstration against the regime

The opposition is organizing regime-critical demonstrations that gather thousands of people in Omdurman. Participants protest against widespread corruption and high consumer prices for food and fuel.

Rebels from the Alliance Sudan’s Revolutionary Front (SRF) (see Political system) storm the city of Umm Rawaba in North Kurdufan. They say the goal is to march on Khartoum, 50 miles north, and overthrow the regime.

Three colonels and four lower-ranking men in the security service are sentenced to prison for between two and eight years for participating in the coup attempt in November 2012. They are pardoned a few days later by President al-Bashir. According to analysts, the alleged coup attempt is really about a power struggle within the regime with links to the Islamists who were the mainstay of the regime from the beginning (see Modern history).

One of the two Darfur rebel leaders charged with the ICC for killing ten AU soldiers in September 2007 is reported to have been killed in combat.

The President is making an official visit to South Sudan since relations between the countries appear to have improved. The South Sudanese oil is beginning to be transported through Sudan, and both countries have withdrawn their troops from disputed border areas.

Promise of Assistance to Darfur

At an international donor conference in Qatar, $ 3.6 billion is promised over six years for the reconstruction of Darfur. $ 2.65 billion comes from the government of Khartoum, while Qatar promises $ 500 million and the EU 35 million. Skeptics object that the situation in Darfur is still too unstable to enable real efforts.

Nine army commanders are sentenced to two to five years in prison for participating in an alleged coup attempt. They are pardoned after just under two weeks.

Six men and one woman, who have been incarcerated since January 2012 following an appeal to overthrow the regime, are released the day after President al-Bashir ordered all political prisoners to be released. It is unclear whether the definition of “political prisoners” includes nearly 200 arrested members of the SPLM-N.

Trial against the coup maker

The trial in a military court starts against a dozen people arrested in connection with an alleged coup attempt (see November 2012).

The Darfur rebels JEM attack the army in the state of North Kurdufan. The attack may mean an escalation of the armed conflict that has so far been most fought in Darfur, South Kurdufan and the Blue Nile.

According to the UN, over 100 people have been killed and 70,000 left homeless during a week’s fighting in central Darfur. Rival Arab clan militia are said to have contested control over a gold mine.

Refugee crisis in the south

The UN is alarming that the situation of around 900,000 refugees in southern Sudan is alarming because the army and the rebel force SPLM-N refuse to allow humanitarian aid. The UN, in collaboration with the Arab League and the AU, has for one year tried in vain to reach the distressed people in South Kurdufan and the Blue Nile.

New talks between Sudanese and South Sudanese presidents in Addis Ababa are suspended after a week. No results have been achieved and the parties are blaming each other for constantly coming up with new demands.