+94 is the dialing code for Sri Lanka.

Sri Lanka is an island nation in the Indian Ocean, southeast of India. During the period 1983–2009, the country was plagued by a civil war, which claimed up to 100,000 lives. Behind the war there were contradictions between the country’s largest population group, the Sinhalese, and the Tamil minority. At the end of the war, the Tamil guerrillas were crushed by the government forces. The accusations of human rights violations in connection with the final battles are many. 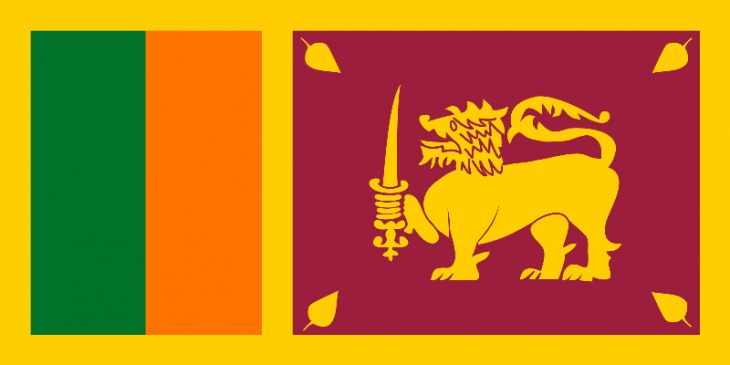 Sri Lanka is an island nation in the Indian Ocean, just southeast of India’s southern tip. The country consists of a large main island and nearby small islands. On the surface, Sri Lanka is roughly equal to Ireland. The country’s climate is tropical and characterized by monsoon winds.

In the inner parts of southern Sri Lanka is a highland area with mountain peaks above 2,000 meters. One of the highest peaks is Adam’s Peak (Sri Pada) which is widely seen. Here pilgrims mainly Buddhists and Hindus, but the mountain is held as sacred also by Muslims and Christians. From the highlands covered by low-growing forest and grasslands, rivers flow in all directions.

The lowland spreads around the mountain area. In the southwest where it rains a lot, rainforests dominate. The lowland is otherwise mostly made up of forestless savanna. Along the coasts, which are characterized by sandy beaches and lagoons, some mangrove forests grow. In total, about one fifth of the land area is covered by forest.

There are many animal species that are unique to Sri Lanka. The country has a fairly large elephant population, which lives protected in several national parks.

Most precipitation falls in the southwest, with an average of 2 500 mm of precipitation per year. The highlands also get some rain, while it is dry in the northwest and southeast.

A government-led inquiry into certain aspects of the civil war of 1983–2009 states that the government side did its best to protect the civilian population and that its highest priority was to protect civilians. The investigation finds, on the other hand, that the LTTE showed no respect for human life. International human rights groups dismiss the investigation as inadequate and biased.

Fonseka gets his sentence extended

The Supreme Court extends opposition leader Sarath Fonseka’s 2.5-year prison sentence by six months after he suggested in a newspaper interview that Defense Minister Gotabhay Rajapaksa (brother of the president) at the end of the civil war in May 2009 should have ordered the execution of Tamil guerrilla warlords as overlords. to the army. Fonseka says he is innocent and that the verdict is politically motivated.

The state of emergency is replaced by new security laws

President Rajapaksa abolishes the state of emergency starting September 8. The reason is that the safety situation is considered to be stable. The government receives criticism from human rights organizations when the state of emergency is replaced by new security laws, which largely function in the same way.

The UN has evidence of human rights violations

The UN-appointed expert group tasked with investigating allegations of human rights crimes committed in the end of the Civil War in the spring of 2009 presents its final report. In it, the experts say they found evidence that acts of violence by both the government side and the Tamil guerrilla LTTE demanded “the lives of tens of thousands of civilians”. The death toll is estimated at up to 40,000 lives. According to the UN report, most civilians were killed by artillery fire from the government army. The expert group also writes that the LTTE used around 330,000 civilians as “human shields” against the army attack, and that those who tried to flee were shot by the guerrillas. The report is rejected by the Lankan government as biased and followed by UN-critical demonstrations in Colombo.

One million suffer from floods

More than 40 people die and over 360,000 lose their homes when the monsoon rains cause severe flooding in central, eastern and southeastern Sri Lanka. About one million people are estimated to have been affected in some way by the disaster, for example by having their fields destroyed.