The American state of South Dakota is located in the Midwest region of the United States. The state is limited to the north with the State of North Dakota, to the south with Nebraska, to the east with Minnesota and Iowa, and to the west with Wyoming and Montana.

After several years under British rule, the region finally came under the control of the United States, which in 1858 created the territory of Dakota, which comprised the present states of South Dakota, North Dakota and part of Minnesota. During the 19th century, the region started to develop significantly due to agriculture, encouraged by the construction of many railways. The development caused the population to increase, until on November 2, 1889, the American government created the states of South Dakota and North Dakota.

South Dakota has a temperate climate, with wide variations in temperature, however, this instability is not so great compared to that of North Dakota; the averages in summer are 23ºC, and in winter, -9ºC. The state has low rainfall rates, the annual average is only 70 centimeters.

South Dakota’s economy is based on agriculture (the state has one of the largest cattle herds in the country), the provision of financial and real estate services and tourism. It is in South Dekota that Mount Rushmore is located, one of the main postcards of the United States. In it are sculpted the faces of four American presidents: George Washington, Thomas Jefferson, Theodore Roosevelt and Abraham Lincoln. 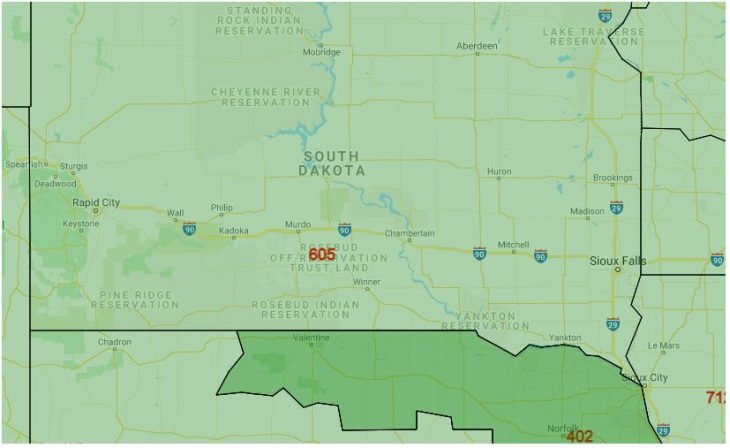 South Dakota consists of the following area codes. Click on the area code to show the cities in that area code.

The area code of 605 is used in the following 66 counties: