+351 is the dialing code for Portugal.

Portugal is southern Europe’s outpost to the Atlantic. The country’s time as a leading colonial power and maritime nation is long over. In 1974 Portugal went from dictatorship to democracy. The country today has a functioning democratic system. After a period of difficult financial problems, when many Portuguese emigrated in search of work, the situation has improved. 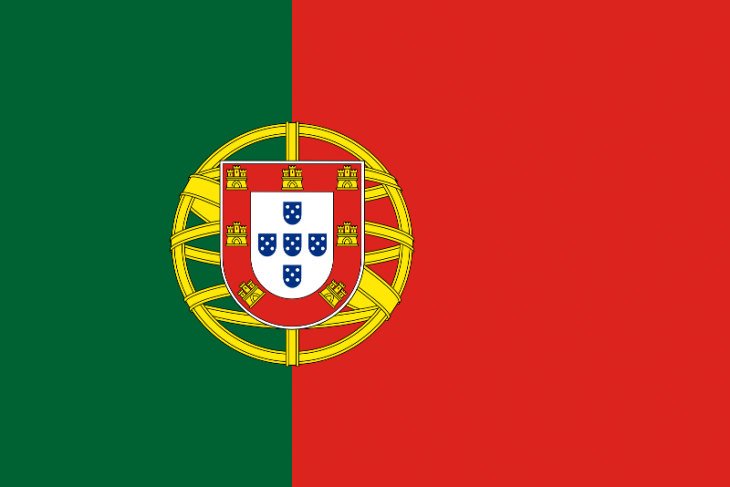 Portugal is located on the west coast of the Iberian Peninsula in Europe’s southwest corner. In the north and east, the country borders Spain. In the west and south the Atlantic forms a land border. On the surface, Portugal is about one fifth the size of Sweden.

In Portugal there are about 10 larger rivers. The largest ones flow up into the Spanish highlands and flow from there west through Portugal to open the Atlantic. Tejo has its outlet at the capital Lisbon, Douro at the second largest city of Porto in the north, while Guadiana departs from the south and sometimes forms a border with Spain before reaching the south coast.

The northern part of the country is hilly and mountainous. The highest peaks reach almost 2,000 meters in height and are found in the Serra da Estrela mountain range, which extends in a northeast-southwest direction through central Portugal. Further north, Douro flows through another vast highland.

South of Tejo, the landscape changes character and becomes lowland, especially the coastal strip to the west. This plain, called Alentejo (beyond Tejo), is for the most part less than 200 meters above sea level. An exception is the mountains that mark the border with the southernmost region, the Algarve. The south coast consists of low sandy beaches and high cliffs.

More than a third of Portugal is covered by forest. The most common tree species are pine, cork oak and eucalyptus. The soil is generally lean. Severe forest fires are common during the summer.

Portugal also includes the volcanic archipelago of Madeira and the Azores in the Atlantic. Of the country’s former colonies worldwide, none are left. The last, Macao, was surrendered to China in 1999 after 442 years of Portuguese rule.

Southern Portugal has a warm and dry climate that is mitigated on the west coast by the impact of the Atlantic. In the interior and on the Algarve coast in the south there is a risk of drought and water shortages.

The Algarve has a distinct Mediterranean climate and is the center of the tourism industry. Northern Portugal’s hilly and mountainous landscape receives more rain and is considerably cooler than the south. On the highest mountains, snow can fall in winter. The temperature differences between summer and winter are greater in the north than in the southern part of the country.

Lisbon with suburbs about 2.9 million

The minimum wage is raised

The government and its support parties agree to raise the minimum wage from 530 euros per month to 557 euros from 1 January 2017.

In its draft budget, the government wants to make a number of social initiatives: increased pensions, lower income taxes and increased support for the poor. However, the Government stresses that the budget must comply with EU rules. New income will come from a new sugar tax on soft drinks and a new property tax on housing worth more than EUR 600,000. According to the government’s forecast, the 2016 budget deficit will land at 2.4 percent of GDP, to reduce to 1.6 percent in 2017. The goal is to reduce the central government debt to the equivalent of 129.7 percent of GDP in 2016 and 128.3 percent in 2017. The National Assembly will vote on the budget at the end of the month.

Former Prime Minister António Guterres is elected new Secretary-General of the UN. He will take up the post on January 1, 2017. Guterres has also previously been the UN Refugee Commissioner.

Severe forest fires in the north

Several extensive forest fires are affecting northern Portugal as a result of prolonged drought and high temperatures. Madeira is also affected – three people have died in the flames.

No fines for Portugal and Spain

The European Commission decides to refrain from fining Portugal and Spain. They refer to the difficult economic situation in which the countries are located and that they have nevertheless made great sacrifices. There is also obviously a concern within the Commission that harsh sanctions would lead to increased popular opposition to the EU in the wake of the British referendum on leaving the Union (Brexit).

At its meeting, the Eurozone’s finance ministers agree with the EU Commission’s decision to impose fines on Portugal and Spain that have failed to reduce their budget deficits. The finance ministers, where Germany’s Wolfgang Schäuble, among others, wants to see harsh fines while France’s Michel Sapin wants to let Portugal escape, has 20 days to decide the size of the fine. In addition to fines, countries are also at risk of losing a number of EU grants.

A welcome break in the crisis is the final victory in the European Cup for the Portuguese national team over the host country France.

Fines for Portugal and Spain?

The European Commission explains that Portugal and Spain are progressing too slowly in attempts to rectify their budget deficits. This means, after all, that the EU may impose fines on countries from a symbolic zero of up to 0.2 percent of GDP. The latter would amount to around € 360 million for Portugal – a considerable sum for the country in crisis. A decision is expected at a meeting of the eurozone finance ministers on July 12.

The European Commission chooses not to fine countries because they do not adhere to the budget deficit framework applicable in the euro zone (3%). Countries are given a year to deal with the problems. Portugal’s budget deficit for the year appears to be 4.4 percent.

The Minister of Culture is leaving

João Barroso Soares of the Socialist Party gives in to resignation requirements, which came after he wrote on his Facebook page that two journalists in the newspaper Público would feel good about an ear file. This after the journalists in an editorial questioned the appointment of him and accused him of an authoritarian leadership style, plumpness and for engaging in friendship corruption. The day before, a high-ranking chief of the Defense Forces had to leave his job after telling parents of gay cadets to urge their children to quit education to protect them from other students.

In the middle of the month, Parliament votes to approve the Socialist Party’s budget (see January 2016). This means, among other things, that the minimum wage is raised to EUR 618 a month.

The budget receives criticism from the European Commission

The draft budget is not rejected by the Commission, but the government is forced to revise it after the criticism, and also to calm the financial markets. Among other things, it is about raising tax revenues by one million euros. The European Commission expresses concern that the budget deficit will again be greater than the 3 percent that the euro zone sets as the maximum limit.

Civil victory in the presidential election

Social Democrat Marcelo Rebelo de Sousa already wins the first round of elections on January 24 with just over half the votes. Left candidate António Sampaio da Novoa, who is running for independence, gets 22 percent. Marisa Matias from the Left Bloc receives 10 percent. After the election victory, Rebelo de Sousa says he wants to contribute to a consensus in politics.

The budget is delayed

The Portuguese government is delayed in the budget work for 2016. However, laws have been passed that pave the way for raising public sector wages, raising pensions and minimum wages; four holidays that have been abandoned must be reintroduced and a special crisis tax should be abolished. According to government estimates, this will cost around 1.2 billion euros. The draft budget receives criticism from several directions for risking to recreate the situation that caused the economic crisis.