+234 is the dialing code for Nigeria.

Nigeria in West Africa is the continent’s most populous state. There has long been disagreement between the Muslim, northern Nigeria and the south where most Christians live. In the Biafra War (1967-1970), triggered when the Christian Igbo people tried to establish their own state, over a million people were killed. After the transition from military rule to civilian rule in 1999, the contradictions have re-emerged today. The Islamist extremist movement Boko Haram terrorized the people of the north during the 2010s. 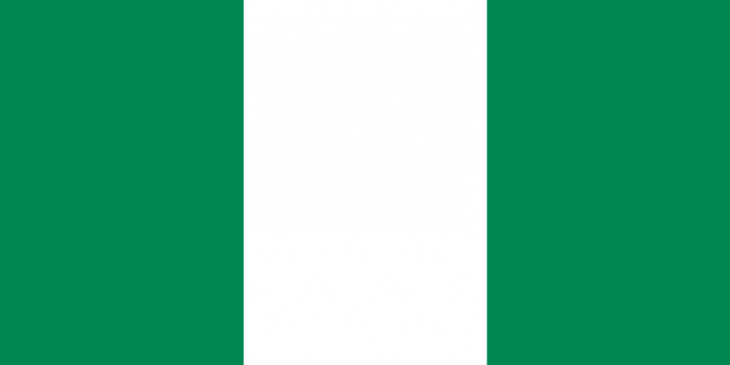 Nigeria is located in West Africa and is twice as large as Sweden. In the middle of the country, Africa’s third longest river Niger joins Benue on its way to the sea. The river arms divide the country into a northern, a western and an eastern part. To the south, the oil-rich Niger Delta spreads out along the Gulf of Guinea, which is part of the Atlantic.

The coast is characterized by a plain with deep mangrove swamps, lagoons and palm groves. Tropical rainforests grow within the coastal plain. In the pristine forests that still exist, many animals, including chimpanzees and other monkeys, live. To the north, the forest gleams and turns into grassy savannas, which cover most of the country. Here roam antelopes and ostriches, hunted by occasional leopard. The lions and elephants, on the other hand, have become rare.

On the centrally located Jos Plateau there are remains of extinguished volcanoes, which reach altitudes around 1,700 meters above sea level. The plateau acts as a water divider, from where water flows down towards the great rivers in the south and towards Lake Chad at the border in the northeast.

Lake Chad is very shallow – only 1.5 meters deep on average – which means that the surface size varies greatly with the seasons. Concerns that the lake is drying out were therefore rejected for a long time, but now the amount of water has decreased significantly. In 1966, the lake was measured at 25,000 square miles; 40 years later, the sea surface was only 500 square kilometers. The decrease is partly due to climate change and partly to increased irrigation in the region. Lake Chad is referred to as a freshwater lake, despite a weak salt content. The lake has a rich plant and animal life, with crocodiles and hippos at the top of the food chain, but all this is now risking to disappear.

The country rises steeply towards the border with Cameroon in the east, where the highest mountain Chappal Waddi lies.

Nigeria has tropical rainforest climate in the south; here, both temperature and humidity are high all year round. In the north there is a drier, semi-tropical savanna or steppe climate. It is hot in the summer but cooler in the winter.

Along the coast, it rains almost year-round, although the main rainy season is counted from April to October. The annual rainfall is 3,000 to 4,000 mm. The annual rainfall in the inland varies greatly between different locations, in some places it amounts to only 500 mm. During the dry season, a desert wind, the harmattan, sometimes blows across northern Nigeria with sand and dust from the Sahara.

The government loses its majority

The UN reports on the number of deaths in Islamist-related violence in the country’s three northeastern states since the state of emergency was announced there (see May 2013). The figure includes civilians, military and members of Boko Haram.

Ansaru’s offspring are also being sued as a terrorist organization. This means that their potential financial assets in the US are frozen and that US financial institutions are prohibited from having relations with them. The US has announced a $ 7 million reward for information leading to the arrest of Boko Haram’s leader Abubakar Shekau.

Amnesty International says it has credible information that at least 950 people suspected of conspiring with Boko Haram have died in Nigerian prisons during the first six months of the year. According to Amnesty, many must have been shot dead, others starved to death or suffocated under the dire conditions of the prisons.

During the month there will be several reports of violent clashes and attacks in the Northeast. In total, the death toll amounts to around 500.

The government is being reformed

Nine ministers and deputy ministers are dismissed, among them the Foreign Minister. No official explanation for the government reform is given, but it is believed to have a connection with the renditions within the PDP government party where some oppose Jonathan re-election.

The army claims to have shot to death Momodu Bama, who was described as a second man in Boko Haram.

Over 50 dead in new attacks in the Northeast

44 people are shot to death in a mosque in Konduga and at least twelve in a nearby village. Boko Haram is suspected of having carried out the attacks as revenge for residents forming defense militia against the Islamists.

Nigeria receives Sudan’s war-crimes president Omar al-Bashir. Human rights organizations criticize the authorities for not arresting Bashir, who is prosecuted by the International Criminal Court (ICC) for war crimes in the Darfur region. The government refers to a request from the AU not to obey the ICC’s demand that al-Bashir be arrested.

Nigeria gets the equivalent of $ 1.1 billion at low interest rates to build new airport terminals in four cities.

State of emergency in the northeast

Jonathan announces state of emergency in Borno, Yobe and Adamawa states. In May alone, dozens of people were killed in new assaults and battles. The violence has reached a level that requires “extraordinary measures,” the president says, admitting for the first time that Boko Haram has in effect taken over parts of Borno and that the armed uprising threatens the nation’s cohesion.

Bloody battle in the Northeast

At least 185 people are reported to have been killed in a firefight between Boko Haram and army soldiers in the small town of Baga in Borno, near the Chad border. Among the victims are many civilians who did not escape. The Islamist militia is said to have had access to much heavier weapons than on previous occasions.

Twelve policemen are killed in the Niger Delta

According to Mend, the attack on the boat in which the police were traveling is a revenge for the prison sentence against Okah (see March 2013). Mend who otherwise has not performed any major deeds since 2009 has now threatened to resume the armed struggle.

Okah is sentenced to prison in South Africa

The former Mend leader is sentenced to 24 years in prison for terrorism in connection with the assassination in celebration of Nigeria’s Independence Day 2010. In parallel, he will serve a 13-year sentence for threats he directed at the South African authorities in connection with the arrest (see October 2010). Okah has South African citizenship and thus cannot be extradited to Nigeria.

Around 40 killed in Kano

Several explosive charges are detonated at a bus station, in a neighborhood where many Christians from the south live.

Jonathan is allowed to stand for election

The Abuja High Court states that the president has the right to seek re-election in 2015. Jonathan was acting president from 2010 and has only been elected once, in 2011.

A court orders the federal government to pay the equivalent of $ 240 million to the city of Odi in the Niger Delta for an army massacre in 1999. According to Human Rights Watch, soldiers burned down nearly the entire city with about 15,000 residents in revenge for a criminal gang from Odi killing twelve police officers. Several hundred people must have been killed by the soldiers.

The four leading opposition parties announce that they will join forces to challenge the ruling party PDP in the 2015 elections. The new alliance, named All Progressives Congress, is formed by the parties ACN, ANPP, APGA and CPC (see Political system). Previous attempts to form a joint opposition platform have fallen on internal power struggles and regional differences.