Located in the Rocky Mountain State Region, Nevada is the state with the highest population growth rates in the United States. The state is limited to Oregon and Idaho to the north, Utah and Arizona to the east, and California to the south and west.

The first explorers in the region were the Spaniards, who gave the state its current name due to the great snowfall that occurs during the winter. Later, in 1821, the region came under Mexican control. Nevada was annexed by the United States in 1848, with the end of the Mexican-American War, and elevated to the status of State after the American Civil War in 1864.

It has a small number of rivers. Most of its region is desert, so its temperatures vary widely between day and night. Winters tend to be quite cold, especially in the northern region of the state, averaging -4 ° C. In summer, the highest temperatures are found in the south, averaging 30 ° C. Nevada has the lowest precipitation rates in the United States.

Although the state has a large population growth, caused mainly by Mexican immigration, large parts of its territory are desert. The main human conglomerations are located in the cities of Las Vegas and Carson City-Reno. Nevada’s biggest source of income is tourism: Las Vegas casinos attract tourists from all over the world. Another significant economic activity in the state is mining; it is a major producer of silver, gold, oil and sand.

Map of Area Codes in Nevada 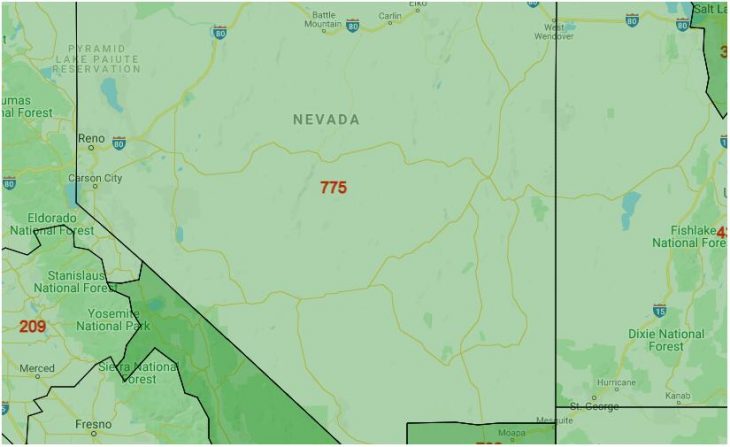 Nevada consists of the following area codes. Click on the area code to show the cities in that area code.

The area code of 702 is used in the following 3 counties:

The area code of 725 is used in the following 1 counties:

The area code of 775 is used in the following 16 counties: