Montana is one of the American states located in the Rocky Mountain State Region. Its name comes from the Spanish word “montaña”, which means “mountain”, due to the large number of these geographical accidents in the State. Montana is one of the largest American states in terms of territory, however, it has a small population: only 902,194 residents.

With the Purchase of Louisiana in 1803, the entire territory of the current state has already passed into the American domain, however, several Native American tribes inhabited the region. The first Americans to arrive in the region were explorers Meriwether Lewis and William Clark, in 1805. For 15 years, the region was sparsely populated. This changed with the discovery of gold in it, which attracted a large number of people and led the American government to create the state of Montana.

The state is limited to the east with North Dakota and South Dakota, to the south with Wyoming and Idaho, to the west with Idaho, and to the north with Canada. About 60% of the state is dominated by the Great Plains, wide strips of grassland, and another part is occupied by mountain ranges. Montana has a temperate climate, greatly influenced by drafts from other regions.

Montana’s economy is far from being one of the largest in the United States: its GDP in 2003 was just $ 26 billion. In addition, the state’s per capita income is the fourth lowest in the country: $ 25,406. Among its sources of income, we can mention the extraction of oil and coal, mainly agriculture and tourism.

Map of Area Codes in Montana 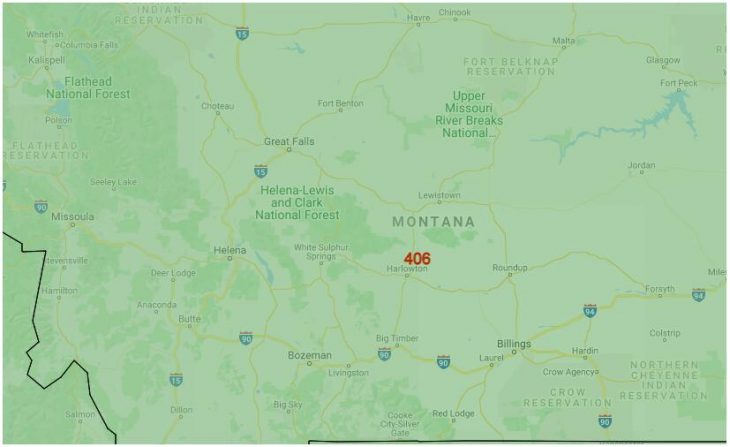 Montana consists of the following area codes. Click on the area code to show the cities in that area code.

The area code of 406 is used in the following 56 counties: