+52 is the dialing code for Mexico.

In Mexico, south of the United States on the North American continent, there are many magnificent remnants of the cultures that met the Spanish colonizers in the 16th century. The heritage of the indigenous peoples is nurtured and many speak their own languages ​​alongside the Spanish. Mexico is considered a middle-income country, but the social divisions are huge. Since 2006, violence between drugs and between them and the police and military has affected around 100,000 people’s lives. 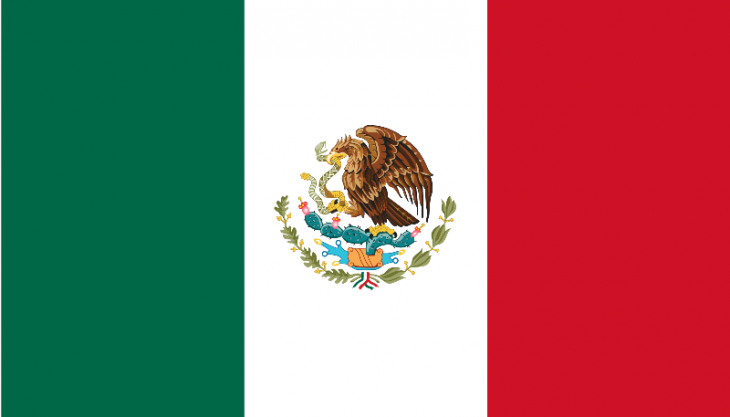 Mexico is the southernmost part of the North American continent and is just over four times the size of Sweden. From the approximately 300-mile border to the United States in the north, the country gradually narrows to the southeast. At the narrowest point, the Tehuantepec Nose, it is only 20 miles between the Pacific and the Gulf of Mexico.

The majority of Mexico is occupied by a high plateau, La Mesa. The plateau is framed to the east, west and south by the Sierra Madre Oriental, Sierra Madre Occidental and Sierra Madre del Sur mountain ranges. The northern part of the plateau is around 1,000 meters above sea level, while the southern parts, Mesa Central, are located at just over 2,000 meters altitude. Here is the country’s population and economic center, the Mexico Valley, with the capital Mexico City, which is one of the world’s largest metropolises.

Through the high plateau runs a geologically unstable belt, where earthquakes are common. To the east and south of the capital lies a volcanic chain with the country’s highest mountain peaks: Pico de Orizaba, Popocatépetl and Iztaccíhuatl.

The mountain ranges south of the high plateau project into the low-lying Tehuantepec Nose, which is the geological dividing line between North and Central America. The nose has been covered by tropical forest, but it has mostly been cut down. There are large oil deposits in the area. To the east of the nose are the Chiapas Highlands and the Yucatán Peninsula, which together form the border with Guatemala and Belize.

Mexico has many habitats, with huge deserts, tropical rainforests, mangrove swamps and high mountain areas. It is considered one of the world’s richest countries, with many species of animals and plants that are not found anywhere else.

The country’s only major rivers are the border rivers against the United States and Guatemala, Río Bravo / Río Grande and Río Usumacinta.

Mexico is at about the same latitude as the Sahara desert. Large parts of the northern high plateau and the surrounding mountains also have the character of the peninsula. However, the large differences in altitude and the position between two oceans create a very varied climate, where the height above the sea means more than the latitude.

Mexico City about 21 million (with suburbs)

President’s popularity at the bottom

The protests following the disappearance of teacher students in September continue. Peña Nieto visits Guerrero for the first time since the students disappeared. In a speech in the tourist resort of Acapulco, the president presents a plan for economic recovery in the state. His popularity figures have dropped to 39 percent, according to a survey published by Reforma magazine.

New police forces will be established

As a result of the students’ disappearance at the end of September, Peña Nieto decides on a comprehensive reorganization of police power. Around 1,800 municipal police forces are to be scrapped and replaced by forces at the state level. In addition, the federal government is entitled to dissolve municipal governments if they are considered to have been infiltrated by criminal groups.

About a month after the abduction of the 43 students, the mayor of Iguala is arrested and his wife arrested in Mexico City; they had been wanted for some time. They are later charged with serious crimes. The state prosecutor states that the students must have been murdered by a criminal gang on order by the police, and the bodies burned at a dump. The murders must have happened to prevent the students from interfering with the mayor’s speech. But many Mexicans misrepresent the authorities’ duties. Tens of thousands participate in protests that occasionally turn violent. The demonstrations are led by relatives of the students.

No referendum on energy reform

The Supreme Court decides that a request for a referendum on the energy issue contravenes the Constitution. The left parties PRD and Morena have collected 4.7 million signatures demanding a referendum on the government’s decision to partially privatize the oil industry.

Soon it is clear that 43 young men have disappeared without a trace after the police intervention on September 26. Federal forces take control of Iguala. Protests are growing around the country and riots are erupting in their quarters. Protesters claim that government officials in the area are in contact with criminal gangs, and that the police have handed the students over to the drug-dealing Guerreros unidos. Guerrero’s governor is forced to step down.

In conjunction with a protest action, a group of teacher students in the city of Iguala in Guerrero disappears, in what will become the prelude to a prolonged scandal with the highest level of repercussions. The students come from a school in Ayotzinapa that is known for leftist activism. They are shot by police, and possibly unknown perpetrators, in connection with a demonstration directed at the mayor of Iguala and his wife who are accused of irregularities and abuses. Six students die and 17 are injured. The others, according to eyewitnesses, are taken away in police cars.

A member of the Federal Congress, Gabriel Gómez Michel, is found murdered a few days after he was abducted by unknown perpetrators in the city of Guadalajara. His party, PRI, suspects that a criminal gang is behind the murder of Gómez and his driver who are also found dead.

In the end, the new police force that was promised (see December 2012) will be 5,000 strong, a decent diet from the 40,000 initially planned. The police force is one of the last elements of the president’s comprehensive package, where energy, telecommunications, electoral laws, and financial markets have already been reformed.

New rules for the telecom industry

Legislative changes that change the conditions of the telecom industry are being passed by Congress and will force Carlos Slim – one of the world’s richest men – to break up his telecom company América Móvil, the largest in Latin America. The new rules also affect Televisa, the largest Spanish-language TV channel in the Spanish-speaking world.

Security forces are accused of massacres

Twenty-two people die in what is first reported to be a firefight between gang members and security forces in Tlatlaya, Mexico, in one of the bloodiest clashes since President Peña Nieto took office. A soldier is injured. Later, it turns out that over half of the victims were civilians who had surrendered and subsequently shot dead in clean executions. Several soldiers are charged but released by a military court. According to recent information, three women who were released in connection with the operation must also have been subjected to torture by police officers who tried to make them testify falsely. The details of the incident remain unclear and, according to critics, the darkening of the efforts against the crime is characteristic of the government.

Over 30 bodies are found in the state. It is unclear who the victims are and how they died, but extensive gang fighting has occurred in the area. The number of deaths in drug-related violence is now estimated at 85,000 since 2007.

Several in the Zeta cartel are killed

One of the Zeta cartel’s founders, Galindo Mellado Cruz, is shot dead by security forces in Tamaulipas. Four other cartel members were also killed, as was a soldier. The Zeta cartel is now said to control more territory than any other criminal group in the country and it is known for extreme brutality. It is the war between the Zeta and the Golfo cartel that makes Tamaulipas severely violent.

Ultimatum to self-defense forces in Michoacán

Members of the self-defense forces in Michoacán (see January 2014) have been given two alternatives: joining a new police force in the countryside by May 10, or handing over their weapons. Over 3,000 are said to have joined the new force. It is unclear how many who have either joined or handed in weapons when the deadline expires. Those who refuse risk being arrested.

Military is put into drug war

Soldiers are sent to the state of Tamaulipas in the north, where nearly 80 people were killed in a month in fighting between various drug bodies. Tamulipas borders Texas and is characterized by drug trafficking across the border. The state security chief has just been murdered.

Police report they shot to death La Familia cartel founder, Nazario Moreno, who was also a front figure for its successor Temple Knights order. This represents another important success in the fight against drug cartels in just a few weeks. Shortly thereafter, another success comes when it is confirmed that the supposed second-rider in the Temple Knights Order, Enrique Plancarte, was shot dead during an operation in the state of Querétaro. Thus, only one remains in the cartel’s leadership trophy: Servando “La Tuta” Gómez.

The leader of the Sinaloa cartel is arrested

One of the world’s most sought after persons, Sinaloa cartel leader Joaquín Guzmán – also known as “El Chapo” – is arrested at a hotel in Sinaloa. That means a feather in the hat for Peña Nieto; The Sinaloa cartel accounts for much of the drug smuggling to the United States, which had promised up to $ 5 million for information that led to an arrest. Guzmán was arrested in 1993 but escaped from a high-security prison in 2001. A man suspected to have been Guzmán’s security chief after the escape, Johathan Salas, was arrested in February 2013.

Police find a mass grave with remains after at least 20 people. In a nearby community, the residents find four severed heads. Drug cartels are suspected to be behind the murders.

Security forces seize 38 members of the Temple Knights Order cartel, including a senior leader, in an effort to restore order in Michoacán. But the self-defense groups say they are not satisfied until all the cartel’s top figures are arrested. One week later, one of the top leaders in the Order of the Knights Templar, Dionico Loya Plancarte, is arrested. The authorities will then agree with the self-defense groups that the latter will join a new form of official defense force for the countryside. President Peña Nieta also promises more money to Michoacán to address the underlying causes of the spiral of violence. The money will go to schools, roads, hospitals and the like.

Civilian militia occupies several communities in the state and drives out Los Caballeros Templarios (Temple Knights Order), a sect-like drug cartel. They also take over from the local police. The so-called self-defense groups consist of civilians who believe that the police and military do not protect them against the violence of the drug gangs (see also November 2013). When the military tries to disarm the self-defense groups, confrontations arise in their places. The state authorities are turning to the federal authorities for help. The situation in Michoacán has become the most serious security threat in the country.