+60 is the dialing code for Malaysia.

Malaysia consists of two parts: the western part is on mainland Southeast Asia while the eastern part is part of the island of Borneo. The majority of the residents are ethnic Malays and Muslims, but the country holds many peoples and religions. Following the independence of the British colonial power in 1957, political stability and industrialization laid the foundation for a relatively high standard of living among Malaysians. 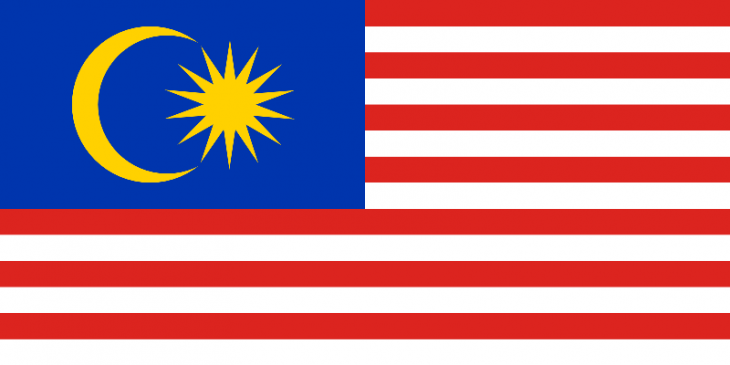 Malaysia has a land area corresponding to just over two-thirds of Sweden. The country consists of an eastern and a western part that is separated by the South China Sea. Malaysia is located just north of the equator and has a tropical climate.

Western Malaysia encompasses eleven states on the southern Malacca peninsula. There is also the capital Kuala Lumpur (an administrative capital, Putrajaya, has been built south of Kuala Lumpur). The Malacca Strait west of the Malacca Peninsula has been one of the world’s busiest shipping routes since ancient times. At the far south, the narrow Johor Strait separates the Malacca Peninsula from Singapore, but across the strait is a kilometer-long bridge.

Eastern Malaysia consists of the two states of Sabah and Sarawak. They are located on the northern part of Borneo, which is the world’s third largest island and is shared between Malaysia, Indonesia and Brunei.

The lone Kinabalu mountain in Sabah reaches over 4,000 meters in height, compared to just over 2,000 meters for the country’s other highest mountains. Mountain ridges extend from the north to the south across the Inland Peninsula. In all parts of Malaysia there are rivers, which are often navigable.

Rainforest grows on the Malacca peninsula, mainly in the north and east, but the truly large forests are found on the sparsely populated Borneo. The wildlife is very rich. Some species, such as the nose monkey, are only found on Borneo. In addition to Borneo, the equally rare orangutan is found only on the Indonesian island of Sumatra.

Malaysia’s tropical climate is characterized by the monsoon winds. From spring to October, the southwest monsoon blows. However, the Strait of Malacca lies in shelter for the northeast monsoon, which blows with full force towards the eastern Malacca peninsula as well as the coasts of Sabah and Sarawak from October to February – March.

In Malaysia, it rains during all seasons, often in cool, fast-moving showers. Most rain falls when the hot and humid monsoon winds blow.

In the 2014 budget, the government promises that low-income households will receive more financial assistance from the state. Nearly eight million Malaysians will receive part of the support during 2014, which is part of the efforts to make Malaysia a high-income country by 2020. Economists warn that the contributions will lead to higher inflation.

Suspects can be detained indefinitely

Parliament is voting for a law that gives police the right to detain suspects without detention indefinitely.

Malaysia announces disaster state in southern parts of Johor state affected by heavy smog with health-threatening air pollution following forest fires in Indonesia. Everything is closed in the coastal cities of Muar and Ledang and its residents are encouraged to stay indoors.

Opposition leader Anwar Ibrahim gathers thousands, perhaps tens of thousands, of supporters for a demonstration against what he considers to be electoral fraud and against the “stolen election”. Police say the demonstration is illegal because the organizers have no permit.

The national front wins the election

Government Alliance National Front wins in parliamentary elections, but with less margin than ever before. It gets 133 out of 222 seats, while the opposition People’s Front gets 89 seats. The public front protests against the election result and says it does not reflect the will of the people.

Prime Minister Najib Razak, in accordance with the constitution, dissolves Parliament ahead of the elections to be held on May 5, 2013. The election campaign begins on April 20. The election is expected to be relatively even between the ruling National Front and the Opposition Popular Front, led by Anwar Ibrahim.

After three weeks of siege, security forces storm the coastal community of Borneo as a Philippine armed group or clan occupies (see February 2013). The storming is carried out with ground troops and support from the air. Some 30 people have been killed during the occupation, both soldiers and locals and clan members. After the storm, the occupants are scattered around the area. In the police pursuit of them, an additional 30 clan members are killed.

A Filipino armed group or clan of around 180 members invades and occupies a coastal community in the Lahad Datu district of Borneo. The clan claims to be descendants of the Sultan of Sulu who ruled parts of the southern Philippines and northern Borneo for several centuries. Malaysian security police wrap a ring around the bracket.