Maine is the northernmost state in the United States, located in the far northeast of the country, a region called New England. The state is limited to Canada to the north and east, and the Atlantic Ocean to the south. To the east, Maine is bordered by Canada and the U.S. state of New Hampshire.

The State of Maine has always been disputed by the French and the British. As a result of these wars, England was forced to impose more taxes and ban trade between American colonies and other countries. This resulted in great discontent in all thirteen colonies. After the War of Independence of the United States, the State of Maine continued to be part of Massachusetts, having become the twenty-third American state only on March 15, 1820.

About 90% of the entire state is covered by forests. One consequence of this is the fact that it is the national leader in the timber industry. Tourism and fishing are other sectors that make a significant contribution to the state’s economy.

The climate in Maine is temperate, with mild summers (average of 19 ºC) and very cold winters (average of -15.5 ºC). The state capital is Augusta, the largest city is Portland, a city well known for its old historic port.

Map of Area Codes in Maine 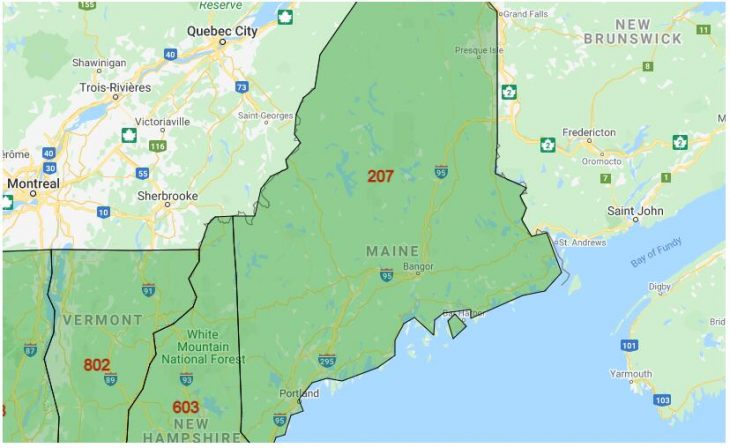 Maine consists of the following area codes. Click on the area code to show the cities in that area code.

The area code of 207 is used in the following 16 counties: