Join a trip to the island nations of Madagascar and Mauritius in the Indian Ocean off the southeast coast of Africa. The trip offers both wonderful nature experiences in tropical greenery and lazy days along palm-lined white beaches with azure waters. Madagascar is something of a paradise for nature lovers with its treasure trove of unique animal and plant life. The island’s flora and fauna developed evolutionarily biologically isolated and therefore one finds here life forms that are completely unique to Madagascar. The island has diverse ecosystems such as tropical rainforest, mangrove forest, dry forest and coral reefs with a fantastic richness of species – but there are actually no dangerous snakes! But Madagascar is unique in other ways as well. The island was first inhabited for centuries after our era by long-distance settlers from Borneo and Bantu people from the African mainland. The indigenous people speak an Austro-Asian language, despite the fact that the island is considerably closer to Africa than the Southeast Asian archipelago. However, the traditional culture has both Asian and African elements. Even the fabulously beautiful Mauritius has a fantastically varied flora and fauna! The island nation is also a functioning democracy with a multi-ethnic population with the highest prosperity in all of Africa. The trip offers a rich mix of exciting nature and cultural experiences, but also on wonderful days along sun-drenched paradise beaches. 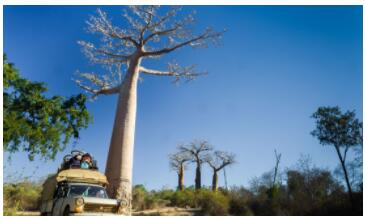 Day 2: Antananarivo – Adasibe
After breakfast we travel east towards the smaller community Andasibe with a stop for a visit to Peyrieea’s Reptile Reserve where in addition to chameleons, geckos, amphibians, snakes and crocodiles etc. you can also see fantastic butterflies. In the vicinity of Andasibe there are extensive wilderness reserves and national parks. During the day we visit a small reserve for a guided hike on foot. During the evening we get a reason to return here to have the opportunity to see some of the nocturnal animals. Lodge accommodation in Adasibe. (Breakfast, lunch and dinner.)

Day 3: Andasibe – Mantadia National Park
After breakfast, we travel by four-wheel drive vehicles through Andasibe – Mantadia National Park and make a stop to get acquainted with the rainforest’s exotic flora and fauna, which includes hundreds of rare orchids and the indrine lemur, which is the largest lemur species in Madagascar. After lunch, we head to the Analamazoatra Special Reserve, a zone within the national park that has been established especially to protect the indoor wall. Overnight in Antananarivo. (Breakfast, lunch and dinner.)

Day 4: Antananarivo – Antsirabe
In the morning we travel west towards the central highlands and the city of Antsirabe (1,500 m above sea level) which was founded by Norwegian missionaries in the 1860s. We travel along mountain roads through a landscape of terrace plantations along the slopes and make a stop in a village to see local crafts. We also stop at a local visitor and information center to learn about the region’s flora and fauna. After lunch we first take a city tour of Antsirabe and then visit the oval crater lake Lac Tritriva surrounded by the lush greenery of Madagascar. We also visit a village just outside the city which is famous for its production of traditional musical instruments. Overnight in Antsirabe. (Breakfast, lunch and dinner.)

Day 5: Antsirabe – Miandrivazo
After breakfast, the journey continues west towards the smaller community of Miandrivazo through the central highlands of Madagascar and a strangely expansive coastal landscape shaped by erosion (lavaka). The area is known for its many gold mines and during the trip we stop in a village where a large part of the population from their income from the mining industry. We are expected to arrive in Miandrivazo in the afternoon. (Breakfast, lunch and dinner.)

Day 6: Miandrivazo – Morondava
The journey continues towards the west coast with several stops along the way. We approach the fertile region of Menabe with its rice and sugar cane plantations and in the afternoon finally arrive at the capital Morondava. With its location on the coast, the city has become a popular seaside resort among both the domestic population and foreign tourists. (Breakfast, lunch and dinner.)

Day 7: Morondava – Kirindy Mitea National Park
The morning begins with an early visit to the local market before heading on to Kirindy Mitea National Park north of Morondava. On the way there we go along Baobab Avenue where we stop to take a look at the strange baobab trees that are reminiscent of upturned trees with roots as a crown. Arriving in the national park, we can, with a little luck, see silkworms, chameleons and the domestic predator fossan (vessel cat). We end the day by enjoying the sunset at Baobab Avenue.

Day 9: Belo sur Tsiribihina – Tsingy de Bemahara National Park
After breakfast, the journey goes north while we can enjoy Madagascar’s stunning scenery through the bus window. In the afternoon we arrive at the world heritage site Tsingy de Bemhara National Park, which was previously only accessible to researchers, but since 1998 is also open to tourists. The 723 square kilometer nature reserve houses many rare and endangered animals and offers some of the most magnificent natural scenes in the whole country with its pristine forest, lakes, mangrove swamps, canyons and deep valleys. Lodge accommodation adjacent to the national park. (Breakfast, lunch and breakfast.)

Day 10: Tsingy de Bemahara National Park
During the day we do a six-hour hike in Tsingy de Bemahara National Park and get to see the area’s spectacular limestone formations that tower up against the sky. The national park includes thirteen different species of lemurs and 140 endemic bird species. Some of the bird species are very rare, including the endangered Malagasy sea eagle. Lodge accommodation in the smaller town of Bekopaka. (Breakfast, lunch and dinner.)

Day 11: Bekopaka – Morondova
During the day we visit the caves on the Manambo River, which the now extinct pygmy people Vazimba had as a refuge during turbulent times. After lunch we return to Belo sur Tsiribihina to visit the village marketplace before continuing to Morondova where we sleep during the night. (Breakfast, lunch and dinner.)

Day 12 – 15: Morondova – Mauritius
We fly from Morondova via the capital Antananarivo to Mauritius about 80 km east of Madagascar. Transfer from the airport to our beautifully located hotel on the island’s wonderful west coast. (Breakfast and dinner.)

Day 16: Mauritius and return home in the evening
Morning and afternoon open for your own activities. During the evening transfer to the airport before the flight to the place of boarding. Meals are included on board the long-haul flight. 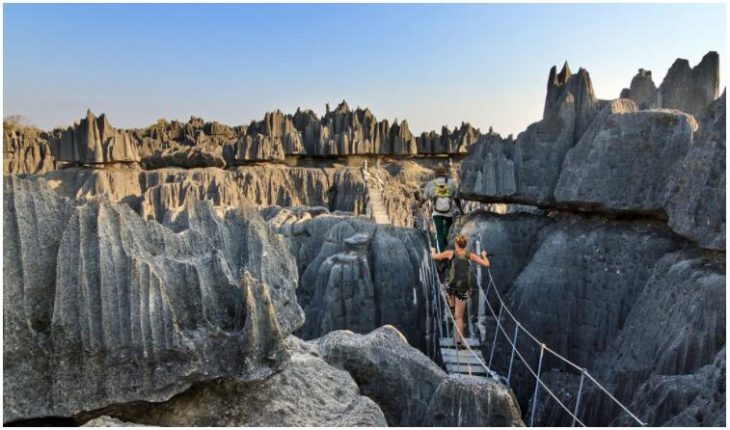