+231 is the dialing code for Liberia.

The Republic of Liberia in West Africa was founded in 1847 by freed American slaves. They created a state that in much imitated the United States and where they and their descendants came to constitute an upper class that until 1980 had a monopoly on political power. Since then, brutal coups and civil war have ruined the country and destroyed the economy. Since a few years into the 2000s, laborious reconstruction work has been ongoing after the war, but the development is slow and the situation is aggravated by widespread corruption. 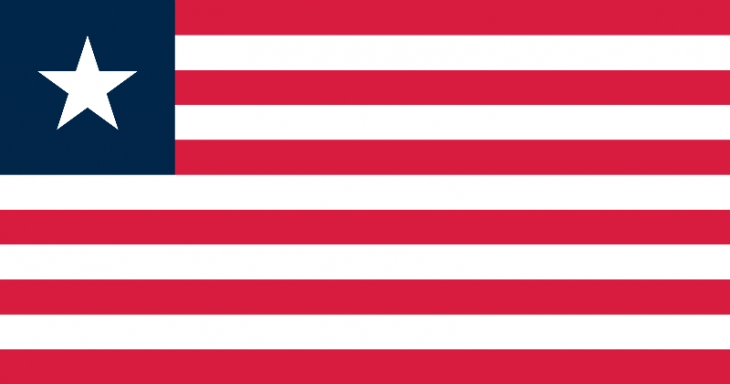 Liberia in West Africa borders on the northwest to Sierra Leone, on the north to Guinea and on the east to the Ivory Coast. To the west, the country has an approximately 57-mile-long coastline along the Atlantic, but strong waves, sharp cliffs and lagoons make much of the shoreline inaccessible, except at a few beaches and natural harbors.

Inside the coast is a narrow and sandy plain, which turns into a hilly upland area. In the north, mountain ranges rise with peaks of more than 1,400 meters, and between them several stray rivers cut down through the country.

Significant parts of Liberia are covered by tropical rainforests, which are, however, in the process of transitioning into savanna due to hard logging.

The climate is tropical with a constant daytime temperature of about 26 degrees on the coast but with considerably greater variations inland – from 9 to 44 degrees.

The rainy season falls in most of the country during May-October. At the coastal plain it rains up to 5,000 mm per year, but only about half as much inland. During December – February, the desert wind blows the Harmattan in from the Sahara.

Elections to the Senate

In the middle of the month, the Supreme Court decides that the Senate election can be held as scheduled in December. This is a response to a call from a group of former government officials and representatives of political parties who have wanted the election postponed until the Ebola epidemic is under control.

The election, which applies to 15 of the Senate’s 30 seats, will be held on December 20, but turnout is low. Among the 139 candidates are former footballer and presidential candidate George Weah who is competing with President Sons Robert Sirleaf for a place. However, it will be an easy win for Weah who gets 78 percent of the vote, while Sirleaf only gets 11 percent.

The World Bank estimates that economic growth that was almost six percent before the crisis will fall to three percent in 2015.

According to data from the World Bank , the epidemic has had serious consequences for the labor market. Nearly half of those who previously worked are no longer doing so. Some of them have lost their jobs, while others have been urged to stay home, while the markets have been forced to strike again.

The state of emergency is canceled

President Johnson Sirleaf cancels the state of emergency introduced to fight the Ebola epidemic. She emphasizes that this does not mean that “the fight is over”. A few days earlier, the president is relocating to the government and replacing the Minister of Health, among other things.

A crisis fund is created

The initiative is behind several leading African businessmen and the aim is to fight Ebola in West Africa. The promoters aim to raise over $ 28 million. Chinese military builds new healthcare facilities.

As a reason, she states, among other things, that the work to fight corruption goes so slowly.

At the end of the month, for the first time in months, beds are available at health care facilities. However, a WHO spokesman stressed that the danger was not yet over. Until October 8, according to WHO figures, Ebola has claimed over 3,800 lives in Liberia. Nearly 9,000 people have been infected with the disease.

More than 4,000 Liberians have been infected by Ebola

According to WHO statistics up to the end of September, almost 4,100 people have been infected by Ebola in Liberia, of which 2,316 have died in the disease. Probably even more people have been affected. Many also die in other diseases because they cannot receive care or manage to go to health care facilities.

The UN Children’s Fund Unicef ​​estimates that around 3,700 children have become orphans as a result of the Ebola epidemic.

In the second half of October, new medical equipment begins to arrive in the country. The United Nations Food Program is also beginning to assist people in Guinea, Sierra Leone and Liberia with supplies. However, the UN has only received $ 250 million of the billion dollars it said is needed to fight the disease. Only a small portion of the 3,000 soldiers promised by the United States arrived in mid-October.

At the same time, work is underway to obtain a vaccine, based on antibodies in the blood of those who survived Ebola. At best, one of these can be done in early December.

At the beginning of the month, the president announces that the election to the Senate, which would have been held on October 14, is postponed. The Election Commission says in a press release that it recommended this because there are no conditions for the election to be carried out correctly.

US aid is promised

On September 16, the United States announces a support package and promises to send 3,000 soldiers to the region to build new health care facilities. These include 17 clinics in Liberia with room for 100 patients, training of healthcare personnel and ensuring that equipment and other supplies can be flown in more quickly.

Ministers are allowed to go

President Johnson Sirleaf dismisses ten government officials who, despite warnings (see August 2014), have not returned to their home country. These include two commissioners and eight assistant or deputy ministers. Several other lower-level ministers are being warned, and the president says no wages will be paid out before returning home.

Reports come of rapidly rising food prices, but the epidemic is affecting the entire economy and, according to government forecasts, GDP growth looks to be more than halved. In 2014, government revenue is projected to fall by between 16 and 20 percent due to the epidemic.

At the same time, representatives of the aid organization Doctors Without Borders say that their treatment center, which seats 160 patients, is not enough and that they are forced to send home sick patients, which leads to more people being infected.

The epidemic began in Guinea, but Liberia is now the country that is hit hardest and the infection spreads rapidly. According to WHO figures, nearly 1,100 people have died in the disease in Liberia until early September.

After criticizing the Western countries for not doing enough to help fight the Ebola epidemic in West Africa, France sends 20 experts on emergency medicine to Guinea. They are to have their base in Guinea, but the work applies to several of the affected countries and the measures must be coordinated with local authorities. The US, EU and UK also promise new support.

They object to the working conditions and to the fact that they have not received their wages. The Liberian government has offered a $ 1,000 bonus to healthcare professionals willing to work with Ebola patients. At least 120 care workers have died in West Africa since the outbreak of the epidemic.

Media reports in the middle of the month that residents of the West Point area have attacked a clinic where people suspected of being infected by Ebola are quarantined. The 17 people who are there for investigation leave the center. According to Health Minister Walter Gwenigale, locals have worried that infected people from other parts of the city have also been taken to the clinic. After that, the West Point area (with about 50,000 to 100,000 residents) and another residential area is quarantined. The authorities also decide to impose a nightly curfew in these slums. This raises protests and at least four people are injured when residents clash with security forces.

The quarantine of West Point will be lifted at the end of the month, according to media reports since residents agreed to health checks and received education about Ebola.

President Johnson Sirleaf warns several government officials who are abroad without valid reasons that they risk losing their jobs if they do not return to their home country to participate in the fight against Ebola. Nothing is said then about how many people it is about.

Nearly 700 people are believed to have died of Ebola in Liberia by the end of August and about twice as many have been infected.

Together with Guinea and Sierra Leone, Liberia decides to block out areas where the infection is particularly widespread. The military and police are to guard the barricades. The treatment units that are inside the blocked off areas will have increased resources.

The main roads through the capital are blocked by upset residents who demand that the authorities pick up those who have died in Ebola. The authorities have urged residents to avoid touching deceased or sick people and the corpse is left on the streets and inside houses. Especially in the beginning, it seems difficult to reach out with the information, as many Liberians do not seem to believe that the disease exists.

The World Bank deposits up to US $ 200 million to Guinea, Liberia and Sierra Leone in the fight against Ebola.

Measures to prevent the spread of infection

The World Health Organization (WHO) is calling for a crisis meeting in Ghana for the countries in the region to agree on measures against Ebola. In a speech to the nation, President Ellen Johnson Sirleaf tries to inform the Liberians of the symptoms of the disease and what to do to prevent the spread of the infection. She also says that anyone who tries to hide that someone has been infected risks prosecution.

Later in the month, Liberia, with a few exceptions, closes its borders to the outside world for fear of spreading the infection. The country’s schools are also closed and the public employees who can be laid off are sent home on a month’s leave.

At the end of the month, more than 150 people are reported to have died in Ebola since the outbreak of the epidemic.

Up to the end of June, at least 24 people have died of the infectious disease. Neighboring countries Guinea and Sierra Leone have also been affected.

A report from the US aid agency Usaid is leaked to media. According to it, corruption in the country is deeply rooted and exists at all levels. For example, more than 4,000 schools must have been registered without being present, with several thousand so-called ghost workers being paid wages even though they do not exist.

Radio profile Henry Costa challenges President’s adoptive son Fumba Sirleaf, head of the national security service, at a duel in Monrovia. After that he can leave his service on the radio channel Hott FM 107.9. He is later arrested and charged with threatening Fumba Sirleaf to life. He is released on bail after three days in custody and, with the help of well-to-do friends, launches a new radio channel, Voice FM 102.7, where he continues to criticize the president.