+686 is the dialing code for Kiribati.

The atolls that form Kiribati are in three groups that span an enormous area along the Pacific Equator. The islands are low and threatened by floods caused by climate change. The residents fish for housing needs, but otherwise the rich fish stocks will only benefit the country through the sale of fishing licenses abroad. 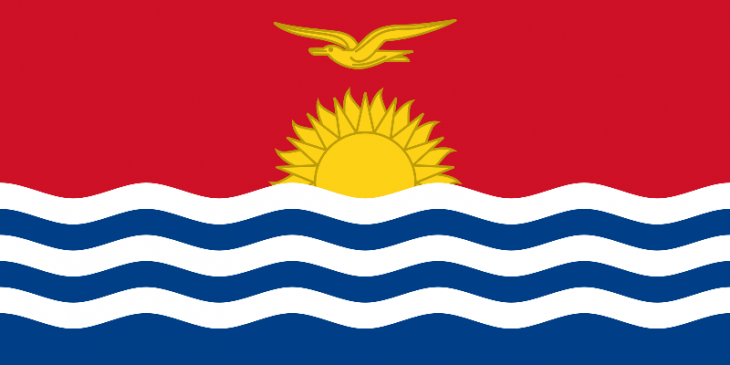 Kiribati consists of one island and 32 atolls distributed over three island groups located along the equator in the Pacific. With the sea area included, the country is eleven times the size of Sweden, while the land area is only slightly more than half of Öland. Kiribati extends close to 400 km in an east-west direction and at most 200 km from north to south.

The vast majority of residents live in the Tungaru (Gilbert Islands) archipelago in the west. The name Kiribati is pronounced “kiribas” and comes from the Gilbert Islands of English. In Tungaru is the “capital atoll” Tarawa, which is a chain of small islands around a 500-meter-wide lagoon. On one of the small islands, Bairiki, the government has its seat and it is sometimes referred to as the capital instead of Tarawa. Parliament is located on the island of Ambo, and the judicial system of Betio, which is also Tarawa’s port and commercial center.

In the middle of Kiribati are the largely uninhabited Phoenix Islands, in what has been the world’s largest marine protection area since 2008 (see Natural Resources and Energy).

The farthest east is the Line Islands, a very elongated chain of islands, some of which belong to the United States. Among those belonging to Kiribati are Kiritimati, one of the world’s largest atolls previously called Christmas Island (but which should not be confused with Christmas Island outside Australia). Kiritimati is almost half the land area in Kiribati.

Alone in the far west lies Banaba (Ocean Island), a so-called raised coral island and previously fertile phosphate island of the same type as Nauru (see Nauru: Geography). It is the only island in Kiribati that rises more than a few meters above sea level; the highest peak is about 80 meters. All other islands are flat atolls with lean soil.

The climate in Kiribati is tropical. The amount of rainfall varies greatly between different parts of the country, but drought is a recurring problem everywhere.

The Northeast Pass winds from March to October, while the west winds can bring storms and heavy rain for the rest of the year. There is great concern among the Kiribati about climate change. Kiribati’s atolls run the risk of disappearing completely if the sea level rises at the rate predicted by the researchers.