Unlike many of its neighboring countries, Kenya has a relatively varied economy. The country has a rich agriculture, a fairly well-developed industry and a wildlife that attracts many tourists. The widespread corruption is a major problem. A multi-party system was introduced in 1991, but Kenyan democracy still has major shortcomings and around the elections, politicians have often tried to strengthen their own position by inflating ethnic contradictions. 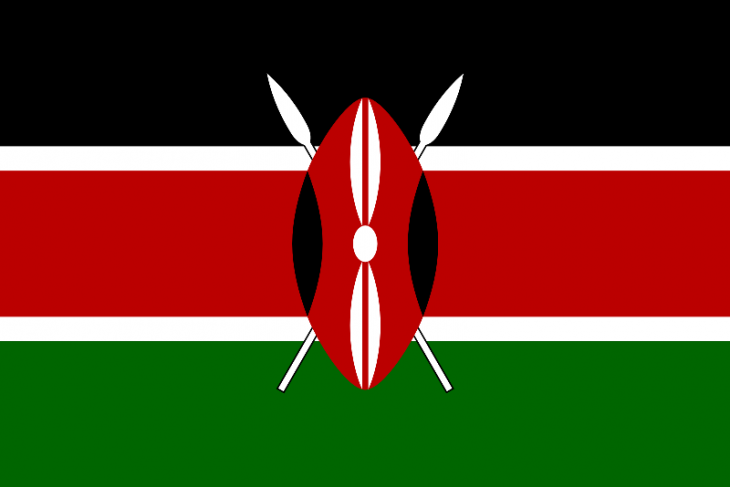 Kenya is located at the equator in eastern Africa and is one third larger than Sweden. The landscape is varied. From the coast, the country gradually rises to a high plateau in central and western Kenya. Through the plateau and the entire country in a north-south direction goes Africa’s big valley low, the Great Rift Valley.

The majority of the population lives in fertile highlands. Here tea and coffee is grown. The capital Nairobi is where the high plateau turns into savannah in the south. On the savannah that continues into northern Tanzania are some of the famous national parks: Masai Mara, Amboseli and Tsavo. They contain elephants, lions, giraffes, zebras and antelopes.

To the west, the high plateau flattens out towards Lake Victoria. The greenery here is lush and there is some tropical rainforest. The low-lying areas of Lake Victoria are occasionally hit by floods during the rainy season.

In the north, Kenya consists of extensive steppe and peninsula. The rainfall is small and the drought is a constant threat to the nomad population. The landscape is dominated by the 25-mile-long Turkana Lake in the Great Rift Valley, on the border with Ethiopia. Lake Turkana is the world’s largest permanent desert lake and known as the home of nile crocodiles and birds.

Along the sink are also several other lakes and extinguished volcanoes. One of them is Mount Kenya, Africa’s second highest mountain.

Although Kenya is at the equator, large parts of the country have a temperate climate, thanks to the high altitude. Along the coast, the climate is tropical: hot and humid.

In Nairobi, which is at approximately 1,700 meters above sea level, the daytime temperature is normally between 20 and 25 degrees year-round, while the night time can be around 10 degrees.

The rainfall is unevenly distributed over the country. Most rain falls on the coast and in the highlands. Only about a tenth of the land receives enough rainfall to make the land suitable for agriculture. Large parts of northern Kenya are very dry.

Pope Francis visits Kenya and holds a mass for tens of thousands of people at the University of Nairobi.

A journalist at the Daily Nation is arrested and questioned about the sources he has had for an article on how the Home Office made tens of millions of dollars in a single day. This is despite the fact that all information is contained in a parliamentary report which is available to the public.

A number of Western countries, including the US, UK, Canada, Sweden and Japan, promise to assist Kenya in the fight against corruption. Among other things, this should be done through measures to prevent money being transferred out of Kenya and to ensure that those suspected of corruption crimes are prosecuted.

The teachers’ union takes over the question of salaries

The Court of Appeal decides that the Labor Court does not have the power to decide the wage dispute between the government and the teachers (see August-October 2015). The teacher union says that the matter should be referred to the Supreme Court.

The International Criminal Court (ICC) announces new arrest warrants against two Kenyans, Paul Gicheru and Philip Kipkoech Bett, who are accused of attempting to influence witnesses in the trial of Vice President Ruto (see also ICC trials after the 2007 election). The formal request for them to be arrested must have been made already in March, and both men should have been arrested in Nairobi in July. However, it is unclear if the ICC has requested that they be extradited to The Hague.

Many deaths in the first half of the year

During the first six months of 2015, at least 310 people were killed in ethnic violence, mainly in the northern part of the Rift Valley, the UN reports. During the six months, the violence drove 215,000 people away from their homes. The figures are about as high as in the whole of 2014. The violence is usually about rivalry on grazing and agricultural lands and access to water.

The state is accused of financial neglect

In its annual report, the OAG claims that just over one percent of central government expenditure during the financial year 2013–2014 is properly reported. The 361 page thick report is a single long account of financial malpractice, incompetence, waste, misguided spending and possibly corruption at a gigantic level.

The United States offers its help against al-Shabaab

The suspected brain behind the massacre at Garissa University (see April 2015) is reported to have been killed in an American drone attack in Somalia. US President Barack Obama visits Kenya for two days. He says the United States is ready to cooperate more closely with the Kenyan government against the Islamist militia al-Shabaab, but he also criticizes the Kenyan attitude toward homosexuals and says that discrimination erodes human freedoms. Obama does not visit his father’s hometown but invites a number of relatives, including a half-sister, to dinner.

The corruption charges against Kenya’s Minister of Agriculture and Transport are closed, while the judicial investigation into the Minister of Energy’s business continues, the state prosecutor announces (see March 2015).

Kenya and 25 other countries agree on a new free trade agreement, the Tripartite Free Trade Area, which covers much of Africa from Egypt in the north to South Africa in the south. However, before the agreement can come into force, negotiations are required and the agreement is approved by the parliaments of the countries.

Five are indicted for involvement in terrorist attacks

Five men, four Kenyans and one Tanzanian, are indicted for their role in the terrorist attack in Garissa (see April 2015). All defendants deny involvement in the act.

Somali Islamist group al-Shabaab claims to have killed 20 police in a raid near the city of Garissa in the northeast, where nearly 150 people lost their lives in an attack in April (see April 2015). The government admits that the assault took place but says that only one policeman was injured.

Requirements for closure of refugee camps

On April 11, Vice President Ruto calls for the UN to close the Dadaab refugee camp, which houses hundreds of thousands of refugees from Somalia (see also Population and Languages). He gives UNHCR three months to clear the camp.

Financial measures against the terror

Kenya decides to close 13 money transfer companies to prevent militant Islamists from distributing funds through them to fund new attacks. 86 people, companies and organizations also get their bank accounts frozen, including bus companies and hotels linked to Somalia. The measures are expected to hit the Somali people in Kenya, many of whom depend on money from relatives abroad.

Kenya launches bombs against areas in the Gedo region of southern Somalia, where the Somali Islamist group al-Shabaab has its bases.

The President makes a statement about the attack

The government announces three days of country grief. In his first speech after the act, President Kenyatta calls on the country’s Muslims to help curb radical Islamists. At the same time, he condemns the assault he calls a “barbaric slaughter”.

148 people are killed and around 80 injured when a group of armed men storm a university in the city of Garissa in northeastern Kenya, near the Somalia border. The assailants must have separated Christian and Muslim students. Somali al-Shabaab takes on the blame for the act.

The Ethics and Anti-Corruption Commission presents a report in which 175 high-ranking politicians and leaders of state companies are accused of corruption. Kenyatta requests that all designated persons leave their positions during further investigations. Five ministers do so.

Parts of the new law are rejected

The High Court rejected several parts of the new anti-terrorism legislation that had been appealed by the opposition (see December 2014).

An MP, George Muchai, his two bodyguards and his driver were shot dead in Nairbo in early February.

Teachers worry about their safety

About 700 teachers go on strike in northeastern Kenya. They demand to be relocated to areas where they are not at risk of violence from al-Shabaab.

New law is upheld by the court