Kansas is the most central state in the United States. Located in its territory, Osborne County is the geodesic center of North America, used as a reference point for all maps. The name “Kansas” came from that of a tribe of natives who lived in the region previously, means “people of the southern winds”.

Most of Kansas was annexed by the United States in 1803 with the Louisiana Purchase. In fact, alongside the states of Nebraska and Oklahoma, the region comprised the so-called “Indigenous Territory”. However, the white population in the region caused the United States government to turn Kansas into a state on May 30, 1854, through the Kansas-Nebraska Act. Thus, the majority of Native Americans were taken to other regions, especially to the territory of the current State of Oklahoma.

Kansas is limited to the north with Nebraska, to the east with Missouri, to the south with Oklahoma and to the west with Colorado. The state is nicknamed The Sunflower State, since the huge plains in its territory are covered by these species of plants. It has a temperate climate, with cold winters (average of -1ºC) and hot summers (average of 26ºC).

The state stands out in agriculture: it is the largest producer of wheat in the United States, in addition to having one of the largest cattle herds in the country. Kansas is also one of the national leaders in the exploration of oil and natural gas. We can highlight the provision of community and personal services as another outstanding sector.

The most important city in Kansas is Kansas City, whose major industries are services and commerce.

Map of Area Codes in Kansas 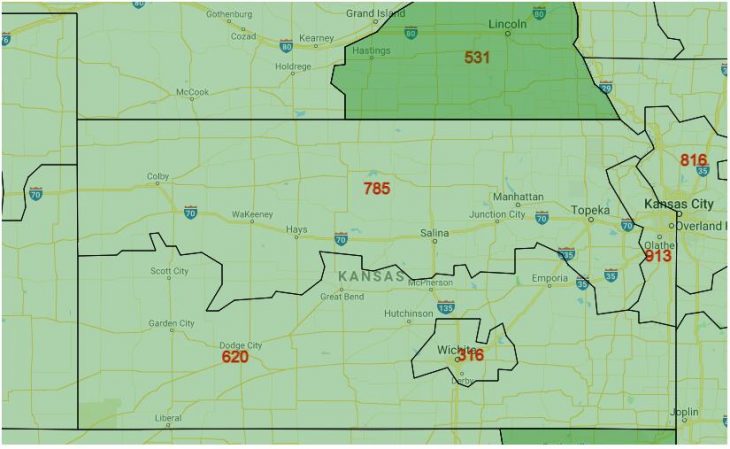 Kansas consists of the following area codes. Click on the area code to show the cities in that area code.

The area code of 316 is used in the following 3 counties:

The area code of 620 is used in the following 56 counties:

The area code of 785 is used in the following 52 counties:

The area code of 913 is used in the following 10 counties: