Jordan is one of the most prosperous Arab countries with a well-educated population and a comparatively good health care system. The royal family, which is considered to be directly descended from the Prophet Muhammad, has long enjoyed wide respect, but in recent years there has been heard dissatisfaction with deep class divisions and political freedom. More than half the population is made up of Palestinians, and Jordan’s location as a neighbor to Israel makes the country vulnerable to crises in the region. The well-armed defense force devours more than a quarter of the state budget. 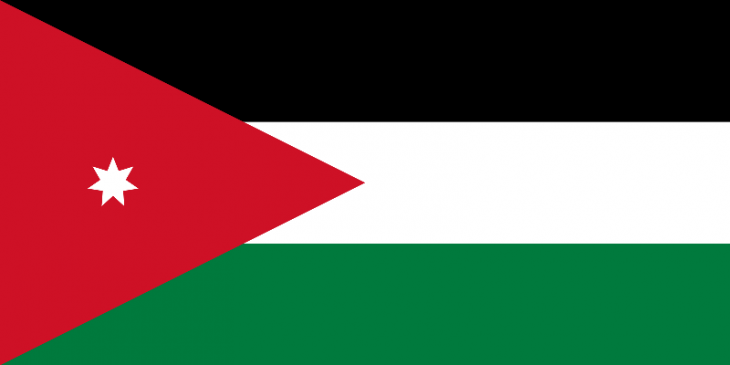 Jordan borders in the west to Israel and Palestine (the West Bank), in the north to Syria, in the east to Iraq and in the south to Saudi Arabia. A nearly three-mile-long coastal strip along the Aqaba Bay on the Red Sea to the south is the country’s only contact with the sea. Most of the surface consists of a dry high plateau between 700 and 1000 meters in height.

The upland is interrupted in the far west by a deep valley in the north-south direction. In the northern part of the valley, the Jordan River flows down to the Dead Sea, which is just over 400 meters below sea level and is the lowest location on earth.

The Dead Sea lacks effluent and its water is ten times saltier than that of the ocean. South of the lake, the valley continues as a dry sink, Wadi Araba, which ends in the Aqaba Bay. In the northeast, the country pushes into the Syrian desert. All major cities are in the cool western part of Jordan.

The high plateau in central and eastern Jordan has hot summers – the temperature sometimes rises to up to 50 degrees – and relatively chilly winters. Western Jordan has a Mediterranean climate with dry summers and humid winters.

The warmest is in August, coldest in January. In winter, the highest parts of the country can get frost, even snow. Snow in January is not uncommon at high altitude, and if it storms the result can be a snow blanket that lasts for several days even in other places. This happened, for example, in 2015, 2019 and 2020. A trip between the capital Amman in Jordan and Jerusalem, both at close to 800 meters altitude, can start and end in snowy weather, while the temperature corresponds to Nordic summer heat when crossing the Jordan River.

Jordan suffers from severe water shortages and the small precipitation that falls comes mainly between November and March; during the summer, water rationing is common. Sandstorms can occur in the spring. Since Jordan is located in a seismically active area, it happens that the country is affected by earthquakes, but usually these have not been very extensive.

Three people are killed in clashes between police and protesters protesting against increased fuel prices.

The head of the country’s intelligence service, Muhammad al-Dahabi, is sentenced to 13 years in prison for misappropriation of public funds and money laundering. The trial is preceded by a few months of repeated demonstrations against high-level corruption.

A soldier is killed at the border by a group of armed men trying to get into Syria to join the rebels there. It is the first time since the Syrian uprising that a Jordanian soldier lost his life in connection with the conflict.

Authorities arrest 11 suspected terrorists who are said to have prepared attacks on Western diplomats and business centers in Amman. The men must have obtained weapons from Syria and received assistance in making bombs from the terrorist network al-Qaeda’s Iraqi branch.

A transitional government is set up under the leadership of an independent politician, Abdullah al-Nasur, who is said to have good relations with the opposition.

King Abdullah dissolves parliament and announces parliamentary elections. No date is stated but the elections must be held within four months. The Islamic Action Front (IAF) says that the changes to the electoral law that were implemented during the summer are not satisfactory and that the party is thinking of boycotting the parliamentary elections unless King Abdullah undertakes serious political reforms. The King’s announcement of new elections triggers a demonstration in the capital Amman. Around 15,000 people follow IAF’s call and go out into the streets to demand political reform. It is the largest demonstration in the country since spring 2011.

Jordan is asking for help

Jordan is asking the outside world for financial help to deal with the influx of refugees from Syria’s civil war.

Changes in the electoral laws are approved by the king

The King approves amendments to the electoral laws, which means that in future the 150 members of Parliament will be appointed in two separate procedures. 123 members, 15 of whom are women, shall be elected by majority vote in constituencies in which one or more candidates are elected. In these elections, voters have a vote regardless of how many candidates are to be appointed. The remaining 27 seats will be added in national proportional electionswhere the number of candidates is added according to the party’s share of the votes. The critics argue that the changes are not far-reaching enough and that the electoral system will continue to benefit the king by adding the majority of the mandates in rural constituencies where the king has many supporters. The opposition demands, among other things, that 50 percent of the seats in Parliament be filled in national proportional elections.

A former head of government, the lawyer Fayiz Tarawinah, takes over as prime minister. He also becomes Minister of Defense in the new government.

At the end of the month, Prime Minister al-Khaswneh submits his resignation application after only six months as head of government. Al-Khaswneh has supported the opposition since he proposed a new electoral law that contains several controversial changes. Among other things, the number of seats in Parliament intended for political parties would be reduced, a minimum limit for the proportion of female members introduced, as well as changes in the voting process itself.

Two journalists are sentenced to fines and a short prison sentence for undermining activities. The journalists had worked on an article in which a Member accuses the king of protecting a former minister from being charged with corruption.