+225 is the dialing code for Ivory Coast.

Ivory Coast was one of France’s African design colonies with an economy based on cocoa and coffee cultivation. The country has long appeared as a marvel of stability and prosperity in Africa, though no democracy. A coup d’état at the turn of the millennium and followed by civil war led to political chaos. Economic problems sharpened the contradictions within the country. After new violence in 2011, the situation improved, but there is still strong tension within the country. 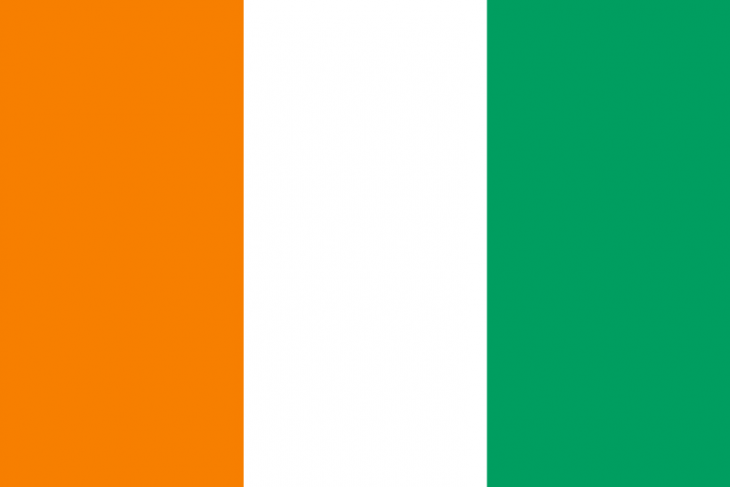 Ivory Coast is located in West Africa at the entrance to the Gulf of Guinea. The country’s area is about three quarters of Sweden’s. In fact, during the civil war of 2002, the country was divided into a government-controlled southern part and a rebel-controlled northern one. A peace agreement was signed in 2007 and a reunion was initiated, but that process is slow.

The Atlantic coast to the south consists of cliffs, long sandbanks and shallow lagoon lakes. Inside the coast, a rainforest belt is spreading, but most of the original forest is felled. The most fertile soils are found along the coast in the southeast, where most people also live.

To the north of the rainforest, wooded savannas take off. The landscape is mostly pretty flat. In the northwest, however, there are outlets from mountain areas in neighboring countries. Four major rivers flow from north to south.

The country has a tropical climate with two rainy periods in the south (May – July and October – November) and one in the north (June – October). The annual rainfall varies from 2,400 millimeters on the coast to a few hundred millimeters in the north. In the south, the average temperature shifts between 20 and 35 degrees during the year and the humidity is high. In the north it is slightly warmer, between 25 and 40 degrees.

The climate has become warmer and the rain more irregular in recent decades, which has affected plant cultivation (see Agriculture and Fisheries).

Success for RHDP in parliamentary elections

Ouattara’s Alliance RHDP wins a majority of seats in the National Assembly, with 167 seats and nearly 66 percent of the vote. In addition, a number of independent members are elected to the Chamber. Ggagbo’s party FPI wins only 3 seats. A setback for President Ouattara is the low turnout, according to provisional figures, only 34 percent voted.

On December 18, parliamentary elections are held after a week-long campaign. 30,000 soldiers and police guard the election, which can be carried out without violent incidents. Over 1,300 candidates compete for 255 seats. Before the election, Ouattara urged voters to give him a strong mandate to continue the work he has already begun by voting for his alliance’s Houphouetist Democracy and Peace (RHDP) meeting. During Ouattara, the economy has grown rapidly, but the opposition accuses him of ruling the country as a monarchy. Unlike the 2011 election, FPI also participates in the elections. Only 6 million voters have registered to vote in the election.

The Constitutional Court finds that the new constitution has been formally adopted.

The statute is approved with clear figures

More than 93 percent of voters approve the new constitution, but voter turnout is just over 42 percent.

The referendum will be held as planned on October 30. The opposition claims that turnout is low, between 2 and 7 percent, but there are no official figures yet. Minor incidents, such as stone throwing, are reported from hundreds of polling stations.

Protests against new constitution before the referendum

Two days before the referendum, a thousand people gather in Abidjan to protest the new constitution which they believe is undemocratic. The police intervene with tear gas to disperse the protesters. The opposition urges voters to boycott the vote

New constitution is approved by the National Assembly

The National Assembly approves the proposal for a new constitution with a clear majority. 239 out of 249 members voted in favor, 8 against and 2 abstained. But the House is almost completely dominated by members who are close to the President, since the opposition boycotted the parliamentary elections in 2011. To enter into force, the proposal must also be approved in a referendum. The day after the vote in the National Assembly, the government announces that it will be held on October 30.

The opposition rejects proposals for a new constitution

23 opposition parties criticize the proposal for a new constitution. They argue that if it goes through it would pose a threat to the peace and stability of the country.

Decides by far the majority that a referendum on a new constitution should be held, probably in September or October; The most important change is to abolish the disputed “nationality clause” – that a presidential candidate must be able to prove that both parents were born in Ivory Coast.

All arrested are suspected of participation in the attack in Ouagadougou in January. But three of them are also believed to have been involved in an act at a Ivory Coast resort in March

In an open letter, 23 opposition parties criticize President Ouattara’s plans for a constitutional reform and demand that a constitutional convention be held to produce a proposal. In particular, they object to the idea that the President should appoint the Vice President.

Arrest warrants against Soro are withdrawn

It was Burkina Faso who had issued the order for Soro, who was accused of involvement in a coup in the neighboring country in 2015 (see Burkina Faso: Current Policy) (see January 2016). The Burmese military prosecutor says the matter is now being referred to the Ivorian authorities, and that Interpol did not want to assist them, since Soro is accused of a political crime but risks being sentenced by a military court.

A referendum on a new constitution is planned for the autumn

At the same time, the parliamentary elections will be held. This is announced by President Ouattara in early June. He also says he wants to reach consensus on the proposal. However, the opposition is skeptical and FPI politician Pascal Affi N’Guessan says after a meeting with the president that the whole process has been initiated incorrectly.

President Ouattara appoints a committee of ten members to prepare a proposal, among other things, he wants to set up a new post as vice president and introduce permanent terms of office. The clause stating that a presidential candidate’s parents should be born in the country shall be removed. This will then be approved in a referendum, which the president wants to hold before this year’s shoot. Ouattara says that talks should be held with the political opposition, religious and traditional leaders, as well as with civil society representatives.

France announces that the French force in the Ivory Coast will be expanded from 500 to 900 men in the summer of 2016.

This applies in particular to an arms embargo that has been in effect since 2004.

The former president’s wife will thus face trial for crimes against humanity since the Supreme Court rejected her appeal. The indictment concerns abuses committed after the 2010 election.

Terrorist attacks in the south

At least 18 people were shot dead by militant Islamists on March 12 in an assault on three hotels in the seaside resort of Grand Bassam near Abidjan. Thirty people are injured. According to the authorities, six perpetrators have been “neutralized” (three of them are reported to have been killed) (it is still unclear how many they were, some witnesses speak of seven perpetrators). The al-Qaeda group in the Islamic Maghreb (Aqim) takes on the blame for the act. At least 16 of the victims are civilians, including four European tourists. President Ouattara promises to tighten security in the country. Aqim has previously conducted similar attacks on hotels in Mali and Burkina Faso. Aqim, which has not been particularly active in recent years, has stepped up its violence since joining forces with another Islamist group al-Murabitoun.
According to Aqim, the attack is primarily aimed at France and a revenge for French intervention against Islamists in the Sahel region. It is the first time an Islamist act of this kind has been carried out in Ivory Coast. Just over a week after the act, 15 people are suspected of being involved in the attack.

Blaise Compaoré, who was toppled as president of Burkina Faso in 2014, has been granted Ivorian citizenship as early as 2014, but the decision is only made public at the end of February 2016. The decision must have been signed by President Ouattara in November 2014. Compaoré is wanted in the home country, including for the murder on President Thomas Sankara in 1987 and for having threatened the security of the state.

The trial against Gbagbo begins

On January 27, he will be the first former head of state to be brought before the ICC (see also Political system). The trial also includes the charge against former militia leader Charles Blé Goudé. Gbagbo’s supporters accuse ICC of partisanship, as no charges were brought against the other side, which also committed serious abuse during the 2010–2011 violence.
ICC chief prosecutor Fatou Bensouda says the court will now intensify its investigations into the abuses committed by Ouattara’s supporters.
Gbagbo denies that there is anything in the charges when he appears before the court on January 28.
While the prosecutor portrays Gbagbo as a person who triggered an “indescribable wave of violence”, his defense is trying to create a picture of a person who was constantly trying to find a peaceful solution to the conflict, but that France was the cornerstone of this. The defense described Gbagbo as a person the French establishment had never accepted.

On January 26, there are 22 soldiers facing trial in a military court for the murder of former junta leader and President Robert Gueï (see also Modern History). Bruno Dogbo Blé, former commander of the Republican Guard, and Séka Yapo Anselme of the semi-military police force “Séka Séka”, are charged with ordering and organizing the murders of Gueï, his wife and their staff. Both two are already in prison sentenced to long sentences for murder and other serious violent crimes.

On January 19, President Ouattara asks UN Secretary-General Ban Ki-Moon to extend the UN troops’ mandate in the country until after the 2017 elections.

Arrest warrants against the President

Burkina Faso authorities are issuing an arrest warrant for the Ivorian National Assembly’s President Guillaume Soro on January 19. He is accused of being involved in a coup attempt in the neighboring country in the autumn of the previous year. This occurs after a recording of a conversation between Soro, and a Burkinian politician, Djibril Bassolé, where they both express support for a coup (the recording must be done before the coup attempt). Bassolé is allied with Blaise Compaoré, former president of Burkina Faso, who was forced to leave power in 2014. An arrest warrant has also been issued for Compaoré, who has been living mainly in the Ivory Coast since 2014.
The arrest warrant against Soro creates tension between the Ivory Coast and Burkina Faso. A press release from President Ouattara says the Ivory Coast should try to solve all problems through diplomatic means.

On January 6, Prime Minister Daniel Kablan Duncan submits his government’s resignation application. This happens after President Ouattara, after the election victory, said he wanted to create a new, more dynamic ministry. But already on the same day, Duncan gets commissioned to form a new government.