Guinea on the West African coast has rich natural resources and the economy is mainly based on mineral mining. The country is estimated to have one third of the world’s assets on bauxite, which is raw material for aluminum. But the financial difficulties of authoritarian, military-assisted regimes for many decades have made the country exhaustive. In 2010, Guinea held its first democratic presidential election, but the road to a functioning democracy seems long. 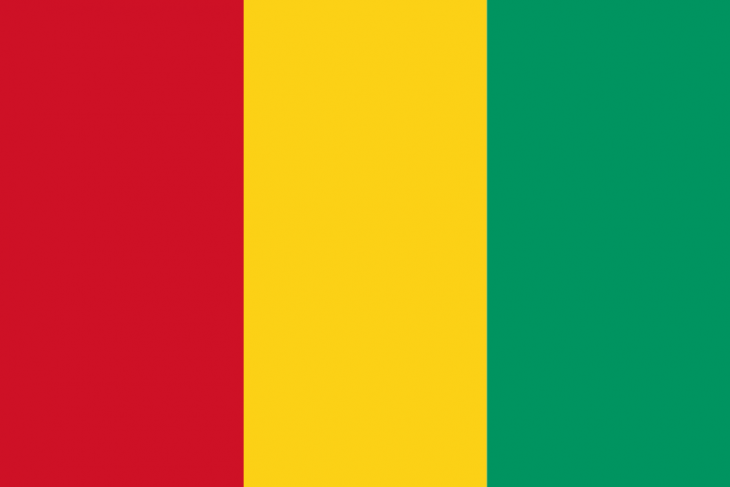 Guinea is on the surface slightly larger than Norrland. The country borders Liberia and Sierra Leone in the south, Guinea-Bissau and Senegal in the north and Ivory Coast and Mali in the east.

Nature is varied. Shallow rivers and fjords with mangrove swamps intersect the coast towards the Atlantic. However, many of the mangrove swamps have disappeared and been replaced by rice crops. Inside the coastal plain stands the mountain plateau Fouta Djallon, where the great West African rivers Niger, Gambia and Senegal have their sources.

The Sahel region’s savannahs are spreading in the northeast while tropical rainforests cover the country’s southeastern parts. At the far south is a mountain massif, the ore-rich Nimba. The mountain slopes have a rich plant and animal life and the mountain has been placed on UNESCO’s list of world heritage sites. There are several species that do not exist anywhere else, including chimpanzees that use stones as tools.

The climate is mainly tropical with abundant rainfall along the coast. There is the capital Conakry, which is known for its huge annual rainfall of over 4,000 mm, of which more than half fall in July and August.

In the hinterland, around the high plateau Fouta Djallon, the rainfall is more moderate, about 1,800 mm per year, despite the rainy season being longer, about seven months. In the savannah region, the rainy season is shorter. In the Guinée Forestière region in the southeast, the climate is subtropical. Temperatures are significantly higher along the coast than inland. During the dry season, the desert wind blows the harmattan inland.

Suspects of massacres are arrested in Senegal

Aboubacar Sidiki Diakité, the man who shot the Camara dome in late 2009 (see December 2009), is arrested in Senegal. He is suspected of being involved in a massacre of 157 people in the fall of that year. He has lived in Senegal for five years under different identities and is expected to be extradited to Guinea.

The political parties agree to pay damages to the people affected by the violence ahead of the 2013 elections. One fund will be created to compensate those injured and the relatives of people killed, another to compensate people who have been plundered on their assets. The settlement takes place after a long dialogue between the political parties and representatives of civil society.

The government is criticized by human rights organizations

Amnesty International and Human Rights Watch criticize the government for not doing enough to investigate twelve murders, multiple rapes and the looting that occurred around the 2015 elections. No one has been held responsible for these crimes and the victims and their families have received no damages. According to the organizations, both government and opposition supporters were behind the abuses. However, the government is commended for the measures it has taken to improve the discipline of the security forces.

After lengthy negotiations, the government and opposition will agree that local elections will be held in February 2017. It will be the first time in twelve years that the Guineans will be allowed to elect their local representatives.

Two Chinese fishing vessels fishing in Guinean waters without a permit run the risk of being fined over $ 3 million. The boats were discovered at the end of August / September together with twelve other fishing boats in a joint action against poaching, initiated by the EU, in which both Guinea and Guinea-Bissau, Gambia and Senegal participated.

The President in conversation with the opposition

President Condé meets Cellou Dalein Diallo for talks. According to the opposition leader, these should have been constructive, and the intention is that the two should meet regularly for deliberations.

At least half a million are protesting against the government

The opposition is again gathering large crowds to protest the government. According to Cellou Dalein Diallo, there are 700,000 protesters, while the security forces speak of half a million participants. The protesters are urging President Condé to step down and demand new jobs. Dalein Diallo accuses the president of having failed the projects to start further iron extraction in Simandou, by not ensuring that new jobs are created. Unrest erupts in connection with the demonstration, a person who was merely a spectator of the manifestation shot to death.

Diplomatic relations are established with Israel

After 49 years of interruption, Guinea and Israel reestablish diplomatic relations. The contacts were broken after the six-day war in Israel in 1967.

Concerns in the country are rising ahead of the local elections in October. Opposition leader Cellou Dalein Diallo announces new protests when the fasting month of Ramadan ends on July 5. His party UFDG also has plans to go to court to have it tested if the president is guilty of abuse of power, partly because of his refusal to set up a Supreme Court.

The WHO says the latest outbreak of communicable disease is over.

Guinea is considering initiating legal proceedings against Global Witness. This after the international organization in a report claimed that President Condé received money from the mining company Sable Mining Africa Ltd, which is registered in the British Virgin Islands tax haven, during the 2010 election campaign. Global Witness has also accused the president’s son Alpha Mohammed Condé of receiving bribes that the mining company must have paid to extract iron in the Mount Nimba area. President Condé rejects the information in the report. Sable’s management also claims that there is nothing in the charges.

At least seven people are believed to have died of the disease in the southern parts of the country. Liberia closes its border with Guinea to prevent the infection from being carried there.

The country’s new Prime Minister Mamady Youlas will take office. Several women are in high positions, Malado Kaba, who previously worked with development issues for the European Commission, becomes a new Minister of Finance, and the lawyer Makale Camara, becomes a new Foreign Minister (she was Minister of Agriculture during the junta era).