+251 is the dialing code for Ethiopia.

Ethiopia is one of the oldest Christian kingdoms in Africa and one of the few continent areas that was never colonized. After the civil war in the 1990s, the EPRDF party alliance completely dominated politics, but since spring 2018 some democratization has taken place and a peace process has begun with the arch-enemy Eritrea. The reforms are led by Prime Minister Abiy Ahmed, who in 2019 received the Nobel Peace Prize for his efforts. Ethiopia is a prominent agricultural country with coffee as the main export commodity. 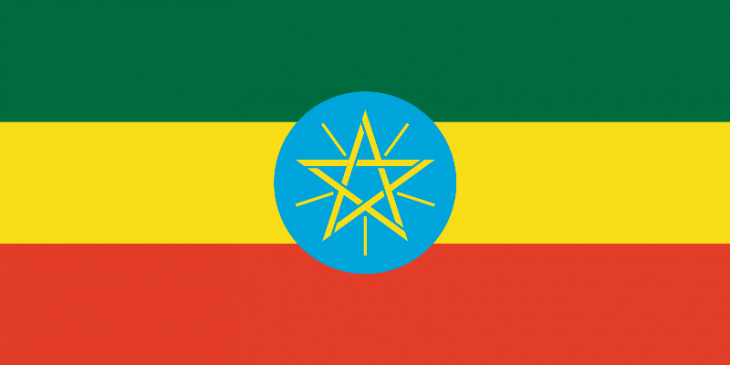 Ethiopia is located on the protrusion of northeastern Africa called the Horn of Africa. On the surface, the country is two and a half times the size of Sweden. Ethiopia is dominated by a highland area and has no coast since Eritrea became independent in 1993. The country is in the tropical zone, but the climate varies with the height above the sea.

Ethiopian or Abyssinian highlands are Africa’s highest contiguous mountain range. Here are high plains and valley sinks, surrounded by mountain peaks that reach over 4,000 meters above sea level. The capital, Addis Ababa, is just over 2,300 meters in height. In the highlands lies the country’s largest lake, Lake Tana. One of the Nile’s two source streams, Abbai or Blue Nile, flows up by the lake.

Through the Ethiopian highlands, from southwest to northeast, Africa’s large fault crack cuts the Great Rift Valley, which is between four and six miles wide. Here, the large Awash basin is formed with the river Awash, which flows into the salty Abbe Lake at the border with Djibouti. To the east of the highlands lies the sparsely populated Afarsenk (or Danakilsenk), a desert area with active volcanoes. Here you will find the Kobar sink, which is located just over 100 meters below sea level.

In the Ethiopian highlands, coniferous forest used to grow, but over the years it has been devastated in the search for wood. Nowadays, forests are only left in hard-to-reach areas. In the lowlands of the southwest, rainforests are growing. Here also the Ethiopian wild coffee bush thrives. In the south and southeast there are steppe and dry water.

Wildlife in Ethiopia is rich and there are a number of species that do not exist anywhere else, including Ethiopian wolf (or Abyssinian jackal) and the baboon gelada. The country has several national parks, of which Awash, Baleberg, Omo and Simenberg are the most famous.

Ethiopia is usually divided into three climate zones. Most of the residents live in the middle zone between 1,700 and 2,400 meters above sea level. Here the temperature is between 16 and 30 degrees.

At altitudes above 2,400 meters it is cool; sometimes the temperature drops to zero degrees. In the lowlands, the daytime temperatures are around 27 degrees and above. In the Danaki desert, some of the highest temperatures in the earth have been measured. Dallol, located here, is considered the place on earth that has the highest average temperature (just over 34 degrees year-round).

The rainfall also varies greatly between different areas. In most of Ethiopia, most of the rainfall falls from mid-June to September. Almost the entire high plateau receives at least 1,000 millimeters of rain a year – in the west it doubles. In the highlands in the north and in most lowland areas it is considerably drier.

Rainfall can also vary greatly from year to year, and the warm, low-lying parts of eastern Ethiopia are extremely vulnerable to drought (see Agriculture and Fisheries).

Recurring long dry periods in the country are known since the time before our era. Severe drought in combination with widespread soil degradation has on several occasions led to famine disasters, including in the early 1970s, the mid-1980s and the late 1990s.

In one month, almost 140,000 Ethiopians are returned to their home country from Saudi Arabia, where they worked without a permit. The Saudi authorities began expelling more than one million foreign workers in November after a deadline for them to arrange work permits expired. Three Ethiopians are said to have been killed in clashes with a Saudi police.

Ethiopian police receive criticism from outside

Parliament elects Mulatu Teshome as Ethiopian President. He succeeds Girma Woldegiorgis, who held the largely ceremonial office for twelve years. The 57-year-old Mulatu, who belongs to the Oromo people group, comes from the post of ambassador to Turkey.

Further demonstrations against the government

Following the demonstration in Addis Ababa in June, a few thousand people in the cities of Gondar and Dessie participate in public protests against the regime. Above all, the demands are that two imprisoned journalists be released. Like thousands of other people, they have been sentenced in accordance with the country’s sweeping anti-terrorism laws.

New agreement on the Nile

Parliament formally approves a new agreement on the distribution of Nile waters, which included six of the countries along the river in 2010. The agreement gives Ethiopia much greater right to manage Nile water within its own country than in the agreement concluded in 1929 during the colonial era, when Egypt was allowed to set stops for all upstream projects that could threaten the water supply on Egyptian soil. Egypt and Sudan have not yet signed the new agreement, called the Cooperative Framework Agreement (CFA), and the Egyptian government is protesting in sharp terms that Ethiopian authorities have begun diverting Blue Nile water for a new power plant project (see Natural Resources and Energy).

Big demonstrations against the government

Thousands of people take part in a demonstration organized by the opposition in the capital, Addis Ababa. The protesters demand the release of journalists and political activists imprisoned under the anti-terrorist law passed in July 2009. They also want the government to do something about the high cost of living, the extensive youth unemployment and corruption. It is the first public protest allowed since 2005 when hundreds of protesters were killed in violence after the election. The protests are organized by the relatively newly formed opposition party Blue Party, which threatens to organize more demonstrations if the government does not obey the demands within three months.

Local elections are held but boycotted by Medrek and several other opposition parties. EPRDF wins a new landslide victory and takes all places in Addis Ababa, among others.

Ethiopia proposes peace talks with Eritrea, to reduce tensions following the March 2012 invasion, but receives no hearing from Asmara.