+506 is the dialing code for Costa Rica.

Costa Rica stands out as a peaceful and relatively prosperous oasis in the otherwise unstable Central America. The army was abolished in 1949 and democracy has since been unharmed at the same time as a welfare state has emerged. For a long time the country was an agricultural economy with coffee and bananas as the most important crops. Nowadays, electronic goods dominate exports. Costa Rica has a well-developed system of national parks and attracts many eco-tourists. 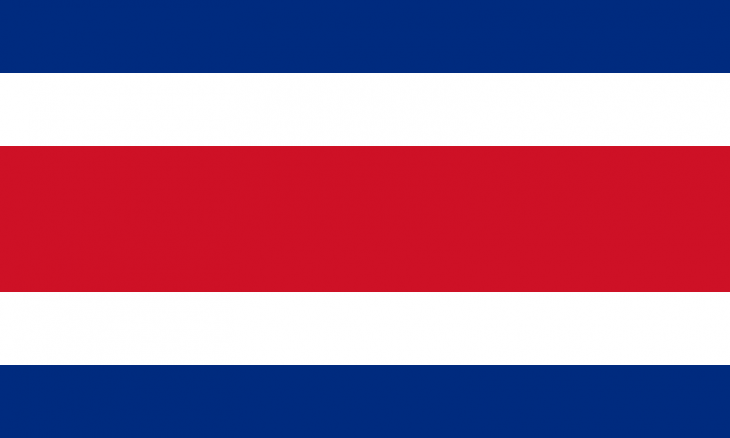 Costa Rica is part of the Central American headland connecting North with South America. The country has long coastlines to both the Caribbean and Pacific. The distance between the coasts is only between 12 and 30 kilometers, but the road goes over high mountain ranges that run through the country from the northwest to the southeast.

The highest mountain peaks reach higher than 3,500 meters above sea level. Many of them are volcanoes and several are visibly active. Earthquakes are common, the last major earthquake occurred in 2012.

In the middle of the country is a fertile high plateau, Meseta Central, surrounded by mountains. Here, the capital of San José is at an altitude of 1,200 meters. Close by are the three following largest cities, all of which are also provincial capitals: Alajuela, Cartago and Heredia. Together, they form a relatively densely populated region with a total of over two million residents, or half the country’s population.

In the north and along the east coast, lowland is spreading.

Much of the forest was previously demolished to give way to agriculture and livestock management, but deforestation has slowed down and the trend has reversed. In the early 1980s, only a quarter of the country was forested, but today half of the country is wooded. There are both tropical rainforest, tropical dry forest and cloud forest. One quarter of the country is in some form nature protected. In Costa Rica there is an enormous biodiversity – about five percent of the world’s species are found in the country which is slightly larger than Denmark.

The whole of Costa Rica is in the tropical zone but the weather and climate vary greatly depending on the elevation above the sea. At the coasts it is hot and humid. On the high plateau it can be hot during the day but sometimes cool during the rainy season and in the evenings. High up in the mountains it can get pretty cold.

The rainy season lasts from May to November, and the dry season from December to April. On the Caribbean coast it is always humid, where it rains about 300 days a year and most of all in December.