Colorado is a state located in the Rocky Mountain States region in the southeastern United States. It has the highest mountains in this chain. The Spaniards, the region’s first explorers, gave the state its name because of the reddish color of the lands near the Colorado River.

Much of the state’s region was annexed by the United States in the Louisiana Purchase in 1803. The other part, owned by Mexico, was conquered after the end of the Mexican-American War in 1848. The population increase as a result of the gold discoveries in the region, and the territory became the 38th state of the United States, in August 1876.

The state is limited to Kansas to the east, Wyoming to the north, Utah to the west, and Oklahoma and New Mexico to the south. Several rivers originate in Colorado, as a result of melting snow from its mountains, which together occupy about two-fifths of its entire territory. In winter, the average temperature in the state is -2ºC; in summer, 23ºC.

The great snowfall in its mountains in winter makes Colorado a major tourist hub. Numerous ski resorts are located in the region, some with international recognition. In addition to tourism, the financial, real estate and telecommunications services sector accounts for a significant part of the State’s GDP. The main products manufactured in the state are transport equipment, food and chemical products.

Its capital and largest city is Denver, which has about 2.3 million residents in its metropolitan area.

Map of Area Codes in Colorado 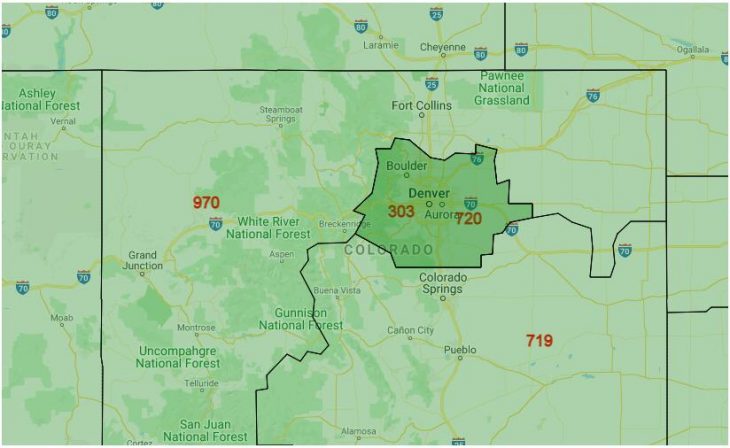 Colorado consists of the following area codes. Click on the area code to show the cities in that area code.

The area code of 303 is used in the following 9 counties:

The area code of 719 is used in the following 28 counties:

The area code of 720 is used in the following 9 counties:

The area code of 970 is used in the following 32 counties: