+57 is the dialing code for Colombia.

Colombia in the northwestern corner of South America has a varied nature, a rich cultural heritage and a strong economy mainly based on oil and agriculture. But deep social divisions have contributed to decades of armed conflict between left-wing guerrillas, the army, semi-military right-wing groups and drug power. The conflict has made Colombia one of the world’s most violent countries. A peace agreement was signed in 2016 with the largest guerrilla, Farc, but the situation is still unstable. 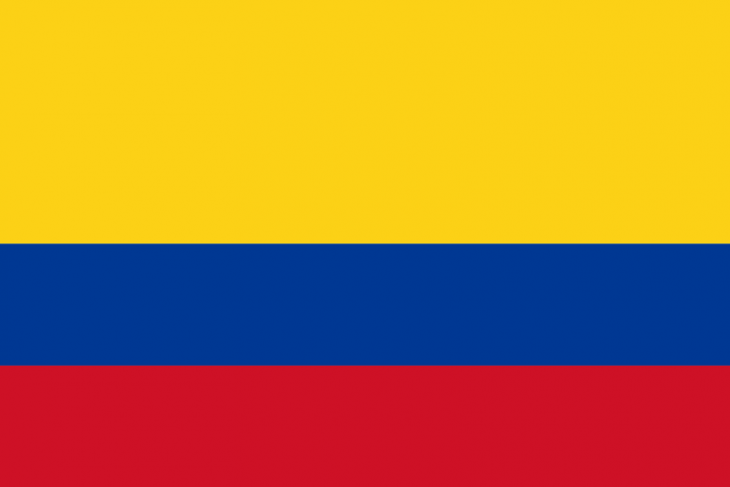 Colombia is the fourth largest country in South America. It accommodates most of the continent’s natural types thanks to its dramatic topography. The country has long coasts facing two seas, the Pacific and the Caribbean.

Geography is dominated by two extremes: the mighty mountain masses of the Andes in the west and the Amazon flat rainforest in the east.

From the south to the north, the Andes run in three parallel mountain ranges. Many peaks are over 5,000 meters high. However, the highest point, Pico Cristóbal Colón, is not in the Andes but on the granite plateau Sierra Nevada de Santa Marta in the far north. In the two fertile main valleys between the mountain ranges flow the country’s most important rivers, Cauca and Magdalena. At La Sabana, one of the high plains in the eastern mountain range, the capital Bogotá expands at an altitude of 2 650 meters.

To the north and west of the Andean highlands are the two coastal plains. The Pacific coast is dominated by tropical rainforest. On the Caribbean coastal plain in the north, the country is generally flat. At the far northeast, the dry Guajira peninsula stands out. Near the Nicaraguan coast are the islands of San Andrés and Providencia, which belong to Colombia but which Nicaragua claims (see Foreign Policy and Defense).

The capital of Bogotá’s climate is similar to a cool Swedish summer. Higher up is the steppe-like terrain called páramo, and from 4,500 meters altitude there is constant snow. However, the glaciers have started to melt as a result of climate change. In the highlands there are two rainy periods, which in Bogotá fall in October-November and in April-May. The North Pacific Coast is one of the rainiest areas in the world.

Colombia is located in a volcanically active region on the border between two of the Earth’s continental plates. The process that once created the Andes is still ongoing and is known as earthquakes and volcanic eruptions.

Santos signs a decree that allows the use of marijuana as a drug. The president says illegal drug production will still be fought.

Interim goals are achieved in the peace negotiations

A new breakthrough in peace negotiations is announced: an agreement on mechanisms to secure justice in a “transitional system” that will also secure compensation for the victims of the armed conflict. Basically, this is the same point in the talks that a settlement was reached in September, but after further negotiations a number of clarifications have been made. According to Santos, it is “perhaps the most important” settlement so far in the peace process.

Security forces state that a high-ranking ELN leader, José Daniel Pérez, was killed in a clash in the Department of Santander. Pérez is said to have been behind an ambush in October against a group of people carrying ballots. Eleven soldiers and a police officer were killed in the ambush, and six people were removed. All have now been released. ELN says the attack was a response to increased military activity in the area, in the Department of Boyacá.

Timochenko states that Farc stopped buying weapons and ammunition in September, and says it shows that the group is serious about stepping down the armed conflict. In October, he also announced that he had ordered a halt to all military training. At the same time, the government has recently accused Farcrebeller of continuing to engage in blackmail, drug trafficking, illegal mining and road mining. According to the Minister of Defense, Farc respects his own ceasefire reasonably, but engages in other criminal activities.

Local and regional elections are held

The elections in all 32 ministries are the first since the peace talks with Farc began. A soldier is killed by ELN in Antioquia before the election, but generally reported to be calm. Santos says the election was the most peaceful and least violent in decades.

Disappearances should be investigated

The government and Farc agree to form a special unit to look for the tens of thousands who have disappeared during the war. The search concerns both living persons and survivors of the dead. The International Red Cross Committee (ICRC) will help.

The government and Farc agree to set up special courts to investigate crimes committed during the conflict, by both guerrilla members and security forces. A truth commission will also be created, and an amnesty law will be adopted. However, the amnesty should not include those who have been guilty of war crimes and human rights violations. Santos and Timochenko meet in Havana and shake hands with each other.

Santos meets his Venezuelan counterpart Nicolás Maduro in Ecuador and the two agree to gradually open the border, one month after the first closure.

Continued flight across the border

According to the UN, more than 20,000 Colombians living in Venezuela have been forced out of their homes in less than three weeks. Most have given up on their own, for fear of reprisals. President Santos accuses Venezuelan leaders of crimes against humanity because of the displacement of people in the border area.

Venezuela’s decision to close a section of the border with Colombia is causing concern. The background is an incident where smugglers must have attacked and injured three soldiers and one civilian. Venezuela begins to expel Colombians living across the border, while others return on their own. Santos, who himself visited the border town of Cúcuta, calls Venezuela’s actions “unacceptable” and calls his ambassador from Caracas home. Venezuela responds by calling home its ambassador from Bogotá.

Since Farc announced a new one-sided cease-fire that will last for one month, both parties jointly announce that the fighting will be stepped down. The government promises for the first time to reduce the military efforts against the guerrillas. Six days after the cease-fire began, Santos orders a stop for air strikes against Farc’s camp.

Santos replaces the commanders of the army, navy and air force. It happens a few weeks after Human Rights Watch said it had seen evidence that top-ranking militants knew of extra-judicial executions of civilians who were then allegedly killed guerrillas, during the period 2002-2008 (see Political system). Santos has officially dismissed the report and thanks the generals for their efforts for the country.

Crisis in the peace talks

The government’s chief negotiator Humberto de la Calle talks about crisis situation due to a new wave of violence. Among other things, Farc has blown several oil lines since the unilateral ceasefire was blown off in May.

The ban on re-election of a president is reintroduced since both chambers of Congress voted on the issue. CD is strongly critical of the decision and claims that the purpose is to prevent Uribe from re-staging. Re-election is also prohibited for items such as prosecutors and prosecutors, to prevent individuals from gaining too much political power (a background is the trips around the appointment of Bogotá’s mayor, see December 2013 and April 2014).

The government and Farc agree to establish a Truth Commission when and if a peace agreement can be reached. The purpose is said to be to explain the half-century-long conflict, to try to ensure that no new fighting flares up.

Since 27 Farcrebeller were killed in a combined ground and flight attack in Cauca in the southwest, the guerrillas inflate their barely half-year-long ceasefire. The attack means the guerrilla’s largest single loss in three years. According to observers, guerrilla military activity has decreased by 85 percent during the ceasefire.

Around 80 people are killed in a landslide in Antioquia. Heavy rainfall caused flood dams to burst in the middle of the night as people lay asleep.

Cocoa control from the air is stopped

The government decides to ban the control of cocaine and opium crops from the air, after a number of reports have shown that the spraying causes cancer. Aerial spraying against coca and opium crops has been used for 20 years.

A strike against Farc’s mining operations

Authorities strike 63 locations where Farc carries on illegal mining, in what Defense Minister Juan Carlos Pinzón describes as perhaps the biggest raid to date against the business. 59 people are arrested in connection with the strike, which Pinzón says will “cost” the guerrilla $ 8 million. Gold, tungsten and cobalt are mined in the area near the border with Brazil and Venezuela.

A former chief of security police, Maria del Pilar Hurtado, is sentenced to 14 years in prison for espionage, targeting opponents of ex-president Uribe – including politicians, journalists and judges. Hurtado was director of the recently discontinued security service DAS in 2007–2008 (see October 2011). She fled the country in 2010 and received asylum in Panama. It caused disarray not least because of Uribe’s close relations with the then Panamanian President Ricardo Martinelli. Panama’s Supreme Court upheld her asylum in 2014 and since being called by Interpol, she surrendered in January 2015.

Since Farc carried out an attack and killed 11 soldiers in southwestern Colombia, the government cancels the decision to stop air strikes against Farc fortresses (see March 2015). President Santos says the attack represents a clear violation of the unilateral ceasefire that Farc proclaimed in December 2014.

The government decides to stop air strikes against Farc and the parties agree to jointly clear mines in the countryside. Colombia is one of the countries in the world where there are most mines in the terrain. Over the past 15 years, more than 11,000 people have been killed or injured by landmines.

The guerrilla announces that it will no longer recruit children under 17, which means that the age limit will be increased by two years. The guerrilla denies the forced recruitment of young people, but the authorities say they have saved several thousand former child soldiers over a 15-year period. Most of them were 16-17, but almost a third were between 9 and 15 years.