+855 is the dialing code for Cambodia.

In Cambodia in Southeast Asia, the landscape is dominated by lowlands with rice farms around the Mekong River and a large lake. In the country, a high culture flourished a thousand years ago when the Khmer people built the Angkor Vat temple. Contemporary history is characterized by the Communist Red Khmer who, in three years, killed about 1.7 million people during a bizarre social experiment. Cambodia is now formally a democracy, but is characterized by an authoritarian government, corruption and poverty. 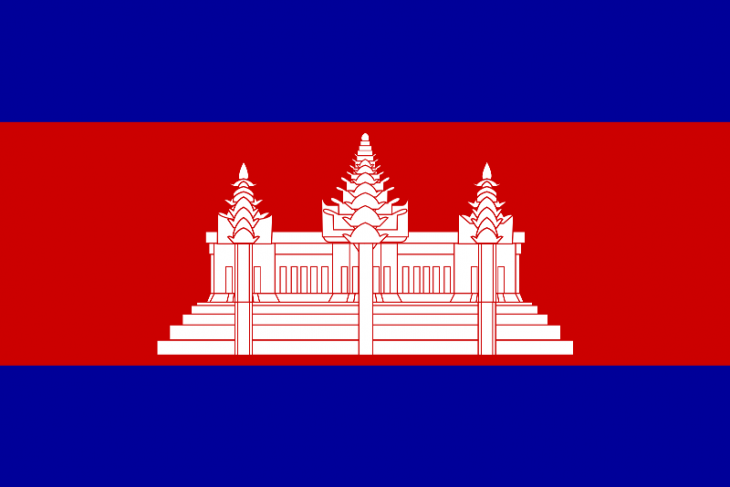 Cambodia is almost half the size of Sweden and covers the southwestern part of the Indochinese peninsula. The country borders Thailand, Laos and Vietnam and has a coast towards Siam Bay. Most of Cambodia consists of a centrally located lowland around the large lake Tonlé Sap and the Mekong River which flows from north to south.

The Mekong River runs through the eastern part of the lowlands and merges with Tonlé Sap in the capital Phnom Penh. Mekong, which is one of Asia’s largest rivers, is on average two kilometers wide in Cambodia, although the variation is large depending on the season. Downstream from Phnom Penh begins the large Mekong Delta, which is mainly located in Vietnam, where the river has its outflow into the South China Sea.

Tonlé Sap (roughly the “big lake”) is Southeast Asia’s largest freshwater lake. It is important both for fishing and as a water reservoir during rainy periods, when the lake’s surface more than doubles. This is because water from the Mekong is squeezed into the lake as the river floods over its banks – the water flow then changes direction.

The relatively short coast in the southwest is cut off from the lowlands of the Cardamom Mountains and Elephant Mountains. Along the border with Thailand, the lower Dangrek mountains. The mountain areas are mostly wooded.

Cambodia is just north of the equator and the climate is tropical with a rainy season from May to November and a period of dry northeast monsoon in between.

Monsoon rains sometimes become so violent that severe floods occur. Mostly it rains in September. During the dry season, drought can create problems. The temperature is fairly even all year round, around 27 degrees in the capital Phnom Penh, but it is extra hot from March to June.

Phnom Aural (in the Cardamom Mountains, 1,813 m above sea level)

Troop retreat from the temple area

Thailand and Cambodia agree to withdraw their troops from the common border, under the supervision of the Indonesian observers from Asean (see February 2011).

Red Khmer conductors too ill to be tested

Ieng Thirith is released from custody because she is judged to be too ill to participate in a trial.

The World Bank responds to construction at sea

The World Bank announces that Cambodia will not receive any new loans until the authorities have reached a settlement with the thousands of residents at risk of being evicted from their homes at Lake Boeung Kak in Phnom Penh. A private construction company owned by a member of the ruling Cambodian People’s Party (CPP) is filling the lake and developing the area commercially.

The new stock exchange in Phnom Penh is inaugurated.

All defendants deny the crime when the lawsuits against Nuon Chea, Khieu Samphan, Ieng Sarg and Ieng Thirith are initiated at the Red Khmer Tribunal (see Political system).

Tens of thousands are fleeing fights at temples

Despite the ceasefire agreement (see February 2011), new border battles with Thailand erupt at the temples of Ta Krabey, Ta Moan and Preah Vihear. About 20 people are killed and about 30,000 flee from their homes in Cambodia.

Deadly fire at the border with Thailand

About 10 people on both sides of the border are killed when the Cambodian and Thai military shoot at each other near the Preah Vihear temple area, which according to the UN belongs to Cambodia but which both countries claim (see also Foreign Policy and Defense). Following mediation by the regional cooperation organization Asean, Thailand and Cambodia later this month agree to send an unarmed Indonesian observer group of some 40 people to the area to monitor a ceasefire.