+95 is the dialing code for Myanmar.

Buddhist Myanmar (formerly Burma) in Southeast Asia became independent from colonial power Britain in 1948 after a liberation war. The country was then one of the most developed in Asia. A decline began in 1962 when the military took power. Juntan ruled unrestricted until 2010, when a democratization began. Myanmar’s most famous citizen is Aung San Suu Kyi, who was awarded the Nobel Peace Prize in 1991 for his peaceful fight for democracy. She and her party NLD are in office today. After a military offensive against the Rohingy people in Rakhine 2017, Suu Kyi’s reputation has dropped. 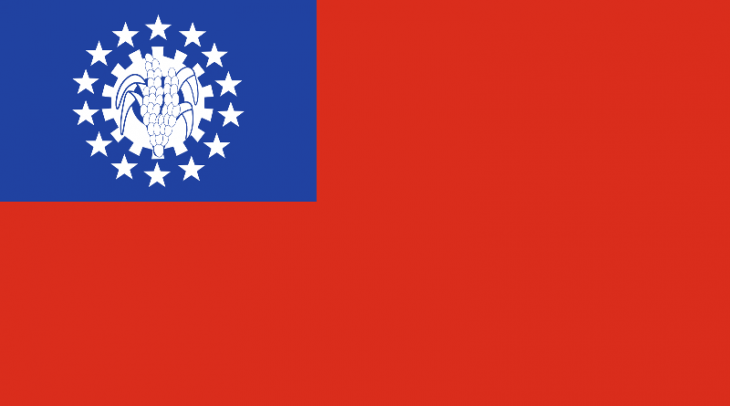 Myanmar (formerly Burma) is located in Southeast Asia with a coast towards the Bay of Bengal and the Indian Ocean.

The central plain around the Irrawaddy (Ayeyarwady) and Sittang (Sittaung) rivers is completely surrounded by a horseshoe-like chain of mountains and high plateaus that delimits the country from Bangladesh and India to the northwest as well as China, Laos and Thailand to the east.

The Chindwin and Salween (Thanlwin) rivers cut through these mountain areas to the west and east respectively.

In southern Myanmar, a narrow, woodland strip along Thailand runs down to the narrowest part of the Malacca Peninsula. Outside, the Mergui (Myeik) Archipelago extends with a large number of islands. Irrawaddy and other rivers have formed fertile delta areas, where most of the country’s rice is grown.

The climate is mainly tropical and influenced by the southwest monsoon of the Indian Ocean, giving Myanmar three seasons: a warm rainy season from late May to late October, a cooler and drier period from October to mid-February, and a warm dry season from February to May.

In the highlands, the climate is relatively cool. Snow occurs in the northernmost mountain areas in January and February.

Local elections – with restrictions – in Rangoon

For the first time since 1949, general elections are held to approximately the corresponding city council in Rangoon. Strict rules mean that only about 400,000 of the city’s several million residents have the right to vote. Most candidates are unknown to the general public. The almost 300 people competing for 115 places have also undergone rigorous scrutiny and many have been thinned out in advance. Most higher posts are still added by the authorities.

The cooperation organization Apec holds a summit in Naypyidaw. Before the meeting, Obama said in an interview that some aspects of Myanmar’s political and economic reforms have stagnated and that decline can be seen in, for example, restrictions on political prisoners, arrests of journalists and violence against Rohingya in Rakhine. The United States calls on the Myanmar government to grant Rohingya citizenship, while UN Secretary-General Ban Ki-Moon talks about “serious human rights problems” against the country’s 1.1 million Muslims, many of whom are placed in detention camps.

Asean holds a summit in Myanmar’s capital Naypyidaw. Important topics of discussion are the conflict in the South China Sea, the Islamic State (IS) terrorist recruitment campaigns in Muslim Asian countries such as Indonesia and Malaysia, and the Ebola epidemic in Western Africa. US President Barack Obama is in Myanmar when the meeting is held and meets with both President Thein Sein and Aung San Suu Kyi. In addition to the meeting, China and Myanmar conclude a bilateral agreement to increase trade exchanges in the agricultural sector.

The UN Special Rapporteur on Human Rights in Myanmar, Yanghee Lee, says before the World General Assembly that some democratization has been achieved in Myanmar, but that several problems remain, such as the ethnic conflicts, political prisoners and violence in Rakhine.

Myanmar grants trading licenses to nine foreign (Asian) banks in an attempt to attract foreign investment to the country.

The Electoral Commission decides to post planned filling elections to 35 seats in Parliament. The authority refers to the need to save money for a summit in Asean in November as well as for the 2015 regular elections. In addition, the Election Commission does not consider that it would make any major difference to the votes to fill the 35 vacant seats. The opposition party NLD agrees with the decision.

The government is asking relief organizations to return to Rakhine

The government is asking Doctors Without Borders and 23 other international aid organizations to return to Rakhine, five months after the organizations were forced to cancel their efforts there. A government spokesman says “we can all make mistakes” and promises that the government guarantees the security of aid staff.

State media say the alleged rape that triggered riots in Mandalay in July was a lie. The woman is said to have been paid at police interrogation to accuse her Muslim employer of raping a cafe.

Four reporters and the CEO of United Weekly News magazine are sentenced to ten years in prison each for publishing an article in which the military is accused of producing chemical weapons. According to Human Rights Watch, the newly acquired media freedom in Myanmar has come under severe pressure in recent months.

Ethnic violence is spread to Mandalay

Tensions between Buddhists and Muslims in the country’s second largest city Mandalay are leading to violence. Two people, a Buddhist and a Muslim, are killed. The riots start after social media reports of a Buddhist woman being raped by a Muslim man. Buddhist gangs attack Muslim-owned shops and a mosque.

“Some 60 political prisoners remain in prison”

The United States extends some sanctions

The United States extends some sanctions against Myanmar by one year. The reason Washington states is that human rights violations and the military’s influence over politics persist, despite the political reforms.

The government stops Doctors Without Borders’ assistance to Rohingya in Rakhine. The organization is accused of prioritizing Rohingy care over Buddhists. The organization is one of the few that provides medical care to the Muslim refugees in the state. Rohingy especially need care for malaria, HIV / AIDS and tuberculosis.

Violence against Rohingya in Rakhine continues

There are reports from several quarters that Buddhists in the state of Rakhine have killed nearly 50 people belonging to the Muslim minority Rohingy. The security forces must also have participated in the killing. UN Human Rights Commissioner Navi Pillay calls on the government to investigate the allegations quickly. The government dismisses the information as baseless rumors, but confirms that police officers were killed in violence in Rakhine during the same period.