+55 is the dialing code for Brazil.

Brazil is a giant both geographically and economically. It covers most of the Amazon and holds half of South America’s population. The country is the only Portuguese-speaking country on the continent. It has evolved into a stable democracy after decades of military dictatorship. Brazil is one of the so-called Brics countries, one of the world’s five largest emerging economies. Many people still live in great poverty in the countryside and in slums. 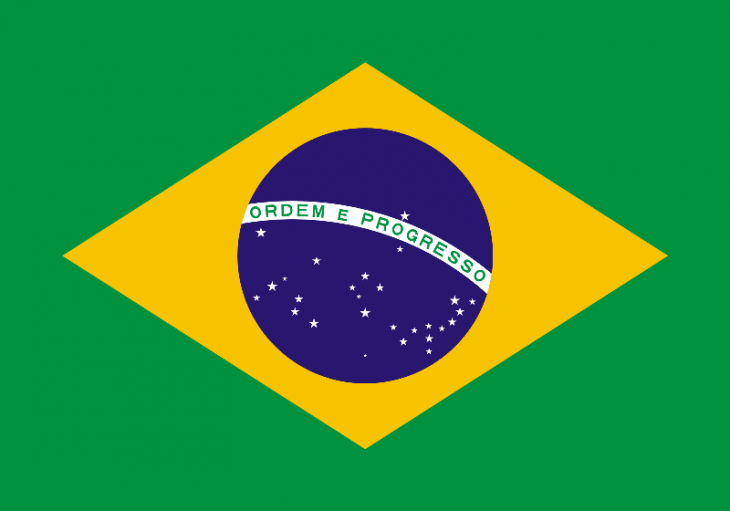 Brazil covers almost half of South America and spans three time zones. On the surface, it is the world’s fifth largest country, almost as large as Europe from the Atlantic to the Ural Mountains. It borders all South American countries except Chile and Ecuador. The equator cuts through northern Brazil. More than half of the land area is wooded.

The world’s largest rainforest area, the Amazon or the Amazon basin, spreads across Brazil’s northern half. The vast Amazon covers nine countries, but about 60 percent of the rainforest is in Brazil. Through the Amazon, a third of all river water flows on Earth. Here, a huge water system is formed with over 10,000 streams and rivers, with the Amazon River and its tributaries Madeira and Negro as the largest.

In the Amazon tropical rainforest, every tenth known species is found in the world – or more than 40,000 species of plants, over 2,000 species of fish and 1,300 bird species, and just over 400 species of mammals. But the Amazon soil layer is thin and the forest vulnerable. A downed rainforest never grows up again, and the cold cutting that is going on is devastating for the Amazon and is affecting the outside world as well, since one fifth of the world’s oxygen is produced here. There is a growing awareness of the problem. But according to a 2020 report, one fifth of the Amazon now emits more carbon dioxide than it absorbs, mainly due to deforestation. The report was based on measurements carried out by the Brazilian research institute Inpe for a decade. The researchers fear it may go faster than previously thought with the transformation of large forest areas from carbon sinks, which bind carbon dioxide, agriculture and fisheries as well as Natural resources, energy and environment).

South of the Amazon, the moist rainforest turns into a savannah area on the Brazilian highlands. The richness of the species is also huge on the savanna, Cerrado, which occupies one fifth of Brazil’s surface. Here too, deforestation poses a threat to sensitive habitats.

Mineral-rich mountains, including gold and diamond deposits, distinguish the highlands from the Atlantic coast to the east.

In the southwest – mostly in the state of Mato Grosso but also across the border with Bolivia and Paraguay – lies Pantanal, the world’s largest tropical wetland, which floods every year. As in the Amazon, there is a rich animal and plant life here. The floods make it difficult to farm in the area. However, fertile soils are found around the Paraná River at the far south and here coffee plantations and livestock farms are spreading.

In the Amazon, there is a tropical climate with heat and high humidity. It often rains and year round. The high plateaus also get hot, but the climate there is drier and the area is sometimes exposed to severe drought. Even the long coastal strip (about 750 km) has a largely tropical climate, but also it is drier than in the Amazon.

Further south, the climate is subtropical or temperate and the rainfall is evenly distributed throughout the year. The capital Brasília in the highlands lies in the rain shadow of the mountains and receives almost no rainfall at all from June to August.

Swedish –4 hours in Brazil, –5 hours in the west

Raid against the President

Police are carrying out a raid on President Eduardo Cunha’s official residence, in connection with suspicions of corruption against him. According to the suspicions published in October, Cunha has received $ 5 million in bribes in the Petrobras legacy and hid money in accounts in Switzerland. Cunha, who is a driving force in the attempts to dismiss Rousseff, rejects all charges but now demands are raised that he himself leaves his post (see also July 2015).

The judicial procedure against the president begins

The Labor Party leader in the Senate, Delcídio Amaral, is arrested on suspicion of obstructing justice. Senator André Esteves, who is also head of Latin America’s largest independent investment bank and one of Brazil’s richest men, is simultaneously arrested for the same. The seizure of Esteves leads to the shares plunging into the bank BTG Pactual, which at one point loses a fifth of its value. The currency falls by 2 percent. In total, more than 100 people have now been arrested.

Two dams in Mariana in Minas Gerai’s flaws and toxic earthen water flow into the Rio Doce River. Nineteen people die when a village is buried by clay. Large forest areas are being destroyed due to the mining accident which is the worst so far in Brazil’s history. Damages for billions amount occur. Authorities are introducing emergency permits in just over 200 communities along the Rio Doce. The toxic sludge destroys crops and kills large numbers of aquatic animals. Hundreds of thousands of people have problems with access to serviced water. After just over two weeks, contaminated water with poison mud reaches the Atlantic coast, 50 miles from the ponds. Eventually, federal prosecutors sue the mining company Samarco, as well as the company’s owners BHP Billiton and Vale, at $ 43.5 billion because of the accident.

A court finds that President Rousseff violated the law in his handling of the 2014 budget. The government is accused of having borrowed money from state banks in breach of the law to cover the budget deficit. According to the opposition, the court’s ruling means that Rousseff can be brought before the national court. Such a request was formally submitted to the President in September. There are no suspicions about the president of the Petrobras legacy.

Concerns about the deeper economic crisis are rising as the real reaches a historic bottom listing and falls below the symbolically charged border 4 against the dollar. The currency has lost more than 33 percent against the dollar so far this year. The fall of the currency is causing the race on the stock exchanges in São Paulo and Buenos Aires.

The government presents a savings package of $ 7 billion, which includes a reduction in the number of government departments from 39 to 29 and salary cuts for public employees. Plans are also underway to reintroduce a tax on financial transactions that were abolished eight years ago, which would provide an additional $ 8 billion. Growth for the year is now forecast to be minus 3 percent.

Credit rating agency Standard & Poor’s lowers Brazil to rubbish status, after reducing its rating from stable to negative in July. The reason is the political turmoil and the government’s difficulties in managing the growing government debt. Thus, the austerity measures that have been implemented to counter the decline have not helped. The budget deficit approaches 8 percent of GDP. New reports indicate that Brazil is entering the deepest crisis since 1931. Inflation is approaching 10 percent.

Hundreds of thousands of people take part in demonstrations around Brazil, demanding national law against President Rousseff. The anger against her is due to both the Petrobras scandal and the economic crisis. Demonstrations in support of Rousseff have also taken place and some of her supporters call the demands of national law for coup attempts.

Police arrest José Dirceu, who has already been sentenced to prison but is now under house arrest (see December 2012), for suspicions related to the Petrobras scandal. He is one of the highest ranking members of the Labor Party so far arrested. According to the prosecutor, he has played a central role in the bribe and continued to receive money even after he was jailed. There are still no formal suspicions against Lula or Rousseff, but the prosecutor emphasizes that anyone can come under investigation for what is now called Operation Car Wash. About $ 2.1 billion in bribes is estimated to have been paid out in this, mainly as heavy overpricing for building contracts. A couple of former Petrobras managers have been sentenced to prison, including Paulo Roberto Costa (see March 2014).

The President moves to the opposition

Deputy Chamber Speaker Eduardo Cunha has accused the government and state prosecutor of planning to appoint him in the Petrobras scandal, and now announces that he is joining the opposition. He threatens to take his party of PMDB with him from the government coalition, which would mean a severe setback for Rousseff.

President’s popularity at the bottom

Only 10 percent of those surveyed think President Dilma Rousseff is doing a good job, while 65 percent think it is bad or unhealthy.

Quotation within the judicial system is introduced

The Supreme Court Chief Judge announces that 20 percent of future judges in the judiciary should be black or of mixed origin. A survey has shown that only 1.4 percent of the judges identify themselves as belonging to that group today, despite being half the country’s population (see Population and Languages). The decision follows a law in 2014 that 20 percent of employees in state-owned companies and companies should have African abusive rights.

The government announces planned cuts of approximately SEK 180 billion in the 2015 budget, to restore confidence in the Brazilian economy among foreign investors and reach the budget target.

The Labor Party treasurer is accused in the bribe

Formal accusations are being made against the Labor Party treasurer João Vaccari Neto and 26 other suspects in the Petrobras succession. A former head of Petrobras, just before a congressional hearing, claimed that the Labor Party received up to $ 200 million from oil contracts.

Over a million people take part in demonstrations around the country against President Dilma Rousseff since the opposition demanded that she be brought before national law. In Sao Paulo alone, half a million protesters are participating. Opponents say she must have known about the corruption scandal in Petrobras, as it largely took place when she was head of the oil company. The government promises measures to fight corruption and impunity.

HD approves investigation of politicians in the Petrobras legacy

The Petrobrass scandal rolls on and the Supreme Court (HD) approves an investigation by 54 politicians for possible bribery. Among them are former President Fernando Collor de Mello and former Speaker of both Senate and Chamber of Deputies. Under Brazilian law, high politicians and government members can only be judged by HD.

The interest rate is set at 12.75 percent when the central bank makes an attempt to halt inflation, which has risen to 7.4 percent. Economists predict that growth for the year will be negative.

Petrobras CEO Maria das Graças Foster and five other high-ranking people in the oil company are leaving because of the ever-growing corruption scandal (see March 2014). Prosecutors say they have found evidence that $ 800 million was paid in bribes and other illegal payments. Former Petrobras Governor Paulo Roberto Costa has singled out a large number of politicians for involvement, including ministers, governors and congressmen. According to Costa, politicians received 3 percent of the value of the contracts signed with Petrobras between 2004 and 2012. Petrobras was reported in December 2014 to have lost 85 percent of its market value since 2009.

The lower house appoints Eduardo Cunha as president, which is seen as a boon to Rousseff: Cunha is known as an opponent of the president. He wins the vote against PT’s candidate. The Senate elects Renan Calheiros, who was also President during Lula but was forced to resign (see December 2007).

Rousseff takes up a new term in office

When Dilma Rousseff formally begins her second term as president, she promises to move forward with the welfare efforts that have helped millions of Brazilians out of poverty. According to the president, education should now be invested.