+387 is the dialing code for Bosnia and Herzegovina.

Bosnia and Herzegovina is located on the Balkan Peninsula, in the central parts of former Yugoslavia. A bloody civil war broke out in 1992 in connection with the collapse of the Yugoslav Federation. The peace agreement signed in 1995 put an end to the fighting but has helped to freeze the ethnic contradictions. The country consists of two autonomous parts: Republic of Srpska and Federation of Bosnia and Herzegovina. 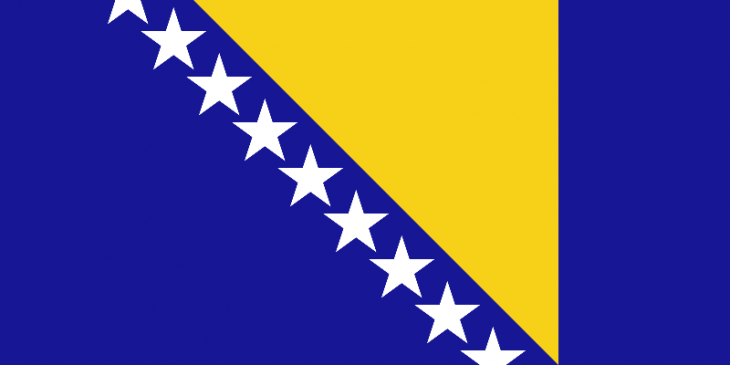 Bosnia and Herzegovina is on the surface slightly larger than Denmark. The country is reminiscent of a triangle and is enclosed by Croatia on two sides, the border is broken only by a two mile stretch of coast towards the Adriatic. To the east lie Serbia and Montenegro. Bosnia consists mainly of mountains.

The mountains are mostly covered by forest and in their places the peaks reach over 2,000 meters. Less than a tenth of the surface is less than 150 meters above sea level. In the north, along the Sava border, are fertile plains.

Since the end of the civil war in 1995, Bosnia has been divided into two so-called political entities: the Bosnian-Croat Federation of Bosnia and Herzegovina (hereafter referred to as the Federation) and the Republika Srpska (Serbian Republic) dominated by Serbs.

The federation, which includes the western and central parts (see map), makes up 51 percent of the country’s area. The Federation’s capital Sarajevo is also the capital of the country as a whole. Sarajevo’s eastern suburbs are located in Republika Srpska and form its own city, East Sarajevo (Istočno Sarajevo, formerly called Srpsko Sarajevo, Serbian Sarajevo). Banja Luka serves as the capital of the Republic of Srpska.

Most of Bosnia has an inland climate with hot summers and cold winters. In the areas near the short coast in the south, the Mediterranean climate prevails.

Bosnian Serb former general Zdravko Tolimir is sentenced by the UN General Court in The Hague to life imprisonment for participation in the 1995 genocide in Srebrenica.

Thousands of teachers and police officers take part in a protest demonstration in Republika Srpska, the first of its kind in several years. Their average monthly salaries correspond to SEK 3,300-4,600, and the government has just submitted a austerity budget for 2013 with ten percent pay cuts for public employees.

Fahrudin Radončić is appointed new Minister of Security and his party, the Bosnian party SBB, thus takes office in the government. The second of the SDA’s previous ministerial posts accrues to the SDP, through Zekerijah Osmić, who becomes Minister of Defense. SBB also receives a Deputy Minister’s post which SDA was also forced to leave.

The SDP manages to get a majority of other parties in the government to vote for the exclusion of the two ministers of the SDA.

The IMF gives a new loan

The International Monetary Fund (IMF) is ready for a new loan of EUR 405 million over two years. The money is intended for the governments of the two entities, and is paid out in installments, provided that cuts are made in the extensive public expenditure.

Many people participate in a mass burial of about 500 newly identified victims of the Srebrenica massacre in 1995.

Parliament fails to approve the budget, after the SDA withdrew its support for draft constitutional amendments that the members of the Presidency should be elected by the parliaments of the country’s two units, rather than directly elected. The SDP breaks its cooperation with the SDA, and is trying to get the party’s ministers to leave the government. However, they refuse.

Željko Komšić, who is the Croatian member of the Presidential Council, leaves all his missions in the Social Democratic SDP. It is in protest that the party is not addressing the country’s problems, such as corruption. In July he leaves the party completely, and then refers to the party proposing constitutional amendments without consulting him.

Bosnia’s new government can finally be approved by Parliament, 16 months after the election. In January, Parliament approved the Presidency’s proposal to Prime Minister Croat Vjekoslav Bevanda, who is a member of HDZ-BiH and outgoing Minister of Finance of the Federation. The new government under Bevanda’s leadership includes two former prime ministers: Zlatko Lagumdžija (SDP) who will become Foreign Minister and Nikola Špirić (SNSD) who will become Finance Minister.