Bhutan is a small kingdom wedged between India and China in the Himalayas. For hundreds of years the mountain country was isolated from the outside world; it was not until the 1960s that an outward opening occurred. Since the King gave up his absolute power in the late 1990s, democratization has been gradually carried out. Most Bhutanese live on self-catering agriculture. For the state, tourism and export of electricity are important sources of income. 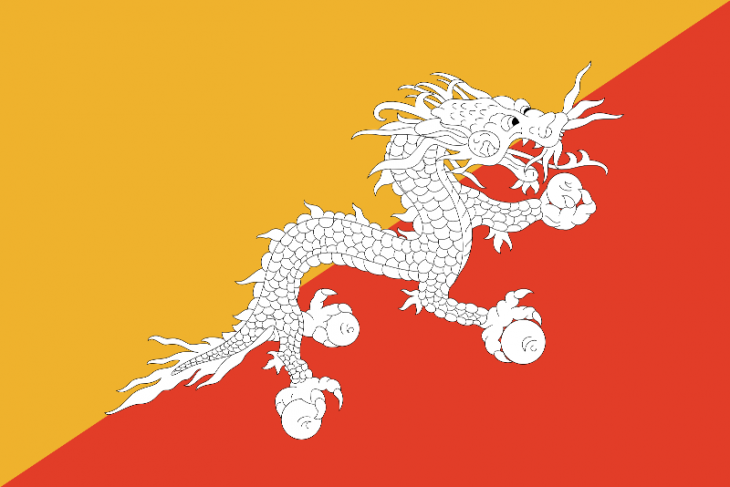 Bhutan is a small kingdom wedged between the two giants India and China in the eastern part of the Himalayas. The country’s official name is Druk-Yul, which means the land of the Thunder Dragon. The climate varies greatly with the height above the sea.

Bhutan rises from the plains of the south to the Tibetan high plateau in the north. Geographically, the country is reminiscent of Switzerland; it is about the same size, has a similar shape, lacks the coast and consists largely of high mountains.

Bhutan can be divided into three zones. In the fairly low-lying southern part there are savanna and grasslands. Most of the population lives in fertile valleys in the wooded upland area in the middle of the country, at a height of between 1,500 and 3,000 meters. The capital Thimphu is located in the western part of the highlands, at an altitude of 2,300 meters. In the far north, mighty mountains dominate more than 7,000 meters above sea level.

The large geographical variations make Bhutan one of the world’s richest countries in terms of size.

The climate varies greatly between the different regions and with the height above the sea. The variations are also great in all regions, sometimes from one valley to the other.

Most of the rain falls from June to September; then the southwest monsoon provides between 60 and 90 percent of the annual rainfall.