+880 is the dialing code for Bangladesh.

Bangladesh is one of the world’s most densely populated countries. The poor nation is crowded into a vast delta landscape with mighty rivers such as the Ganges. The earth is fertile but low-lying, and the country is often flooded by monsoon rains and ravaged by cyclones and river waves. Democracy is fragile but works well. Two women have long replaced each other in power. Agriculture and the textile industry dominate the economy and dependence on aid is great. 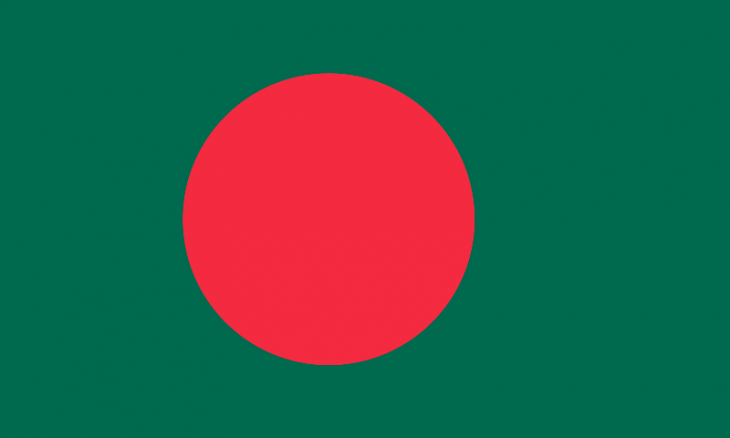 Bangladesh is located in South Asia almost completely surrounded by India. To the south-east is a short border to Burma and to the south lies the Bay of Bengal which is part of the Indian Ocean. The country is about a third as large as Sweden and is largely a huge delta landscape.

The rivers Padma (which Ganga’s main flow is called here), Jamuna (which is Brahmaputra in Bangladesh), Meghna and their many tributaries form on their way to the sea the vast delta. The fertile agricultural landscape rarely rises higher than ten meters above sea level. This means that large parts of Bangladesh are susceptible to flooding in connection with monsoon rains as well as in cyclones and river waves that sweep in from the Bay of Bengal.

Particularly severe flooding in the monsoon rains hit Bangladesh in 1988, 1998 and 2004, when most of the country was submerged and millions of people became homeless. The worst cyclones in modern times occurred in 1970, when half a million are estimated to have perished, and in 1991 around 140,000 people were killed. Also in 2007, a severe cyclone pulled in over the country and destroyed homes and rice fields. However, the death toll was “only” a few thousand, thanks to improved preparedness that allowed a few million people to get to safety.

The severe soil erosion and the constant changes in the course of the river courses that are the result of the floods also pose problems. In addition, Bangladesh is particularly exposed to the sea level rise that follows in the wake of climate change.

In the north, the terrain is slightly more hilly. To the northeast, the Sylhet Mountains reach 250 meters in height. Previously, these mountains were wooded, but nowadays they are partly covered by tea plantations.

The Chittagong Hills in the southeast are different from the rest of the country through their wooded high mountains and deep valleys. The highest peak in the mountain range reaches just over 1,200 meters above sea level.

On the south-west coast is the largest coastal mangrove forest in the world and one of the last jungle areas in South Asia, the Sundarbans. The area is a national park which is on the UN World Heritage List and which is among other places the residence of the endangered Bengali tiger.

Bangladesh has a tropical monsoon climate with three seasons. From June to October, the southwest monsoon brings large amounts of rain. Bangladesh is one of the countries in the world that receives the most rainfall, over 2,500 millimeters per year, and most of it falls during the monsoon period.

After the rainy season, dry air blows down from the inland to the north, providing a cooler climate from November to March. Between March and June it is hot and humid summer.

Cyclones often arise that can create waves of several meters high in the Bay of Bengal and cause great destruction as they sweep far inland over the lowland. The cyclones usually occur between August and November.

Eight members of the Awami Association’s student organization are sentenced to death for a 2012 murder, and 13 members of the organization are sentenced to life in prison for the same crime. The murder was committed in connection with a strike and was filmed by TV. The film shows the students chasing the murder victim, who they mistakenly believe is a political opponent, and then chops him to death with machete.

Abdul Kader Mullah (see February 2013 and September 2013) is executed. It is the first execution to be executed after a judgment in ICT and it triggers a wave of violence across the country, with at least seven deaths.

The GDP alliance boycott the election

The BNP- led opposition alliance decides to boycott the election in protest of the government retaining power during the election campaign and not allowing a transitional government to be appointed.

Elections will be held in January 2014

The Election Commission announces elections until January 5, 2014. The opposition organizes a transport strike and violent clashes occur between police and protesters. More than 20 people are killed in the unrest.

The minimum wage is increased by 77 percent, to the equivalent of SEK 450 a month. Factory workers continue to demonstrate for a larger pay rise.

A civil court sentenced more than 150 border guards to death for participating in the mutiny in February 2009.

Chowdhury Muin-Uddin, leader of Bangladeshi in the UK, and American Ashrafuzzaman Kahn are both sentenced to death by ICT for crimes committed during the War of Independence in 1971. Both are abroad and sentenced in their absence.

The seventh person to be judged by ICT is BNP politician Salauddin Quader Chowdhury. He is sentenced to death for, among other things, murder and religious persecution during the Liberation War of 1971. He is the first sitting MP to be sentenced by the ICT. The BNP politician and former minister Abdul Alim are sentenced to life imprisonment for, among other things, a massacre of hundreds of Hindus.

The Supreme Court tightens the sentence for Abdul Kader Mullah, high-ranking leader of the Islamist party Jamaat-e-Islami (see February 2013), who is now sentenced to death. The message prompted Jamaat to announce a two-day protest strike and unrest erupting in several parts of the country.

The government orders “legal action” against Muhammad Yunus, founder of Grameen Bank (see March 2010 and December 2010). The government accuses him of tax evasion and orders the tax authorities, the central bank and the banking inspection to intervene “in accordance with current law”.

Jamaat is prohibited from participating in the elections

The Islamist Jamaat-e-Islami is forbidden by a court to stand in the upcoming elections, as the party’s statutes are considered to be contrary to the constitution.

During the month, ICT convicts two new convicts: Ghulam Azam (see May 2012), who led Jamaat-e-Islami from 1969 to 2000, sentenced to 90 years in prison and Secretary-General Ali Ahsan Mohammad Mojahid (see July 2010) sentenced to death.

Seventy foreign clothing companies, including Swedish H&M, enter into a legally binding agreement to carry out inspections in the Bangladeshi factories they contract and to pay for the reinforcements in the factories that the inspections show must be made.

ICT condemns Jamaat-e-Islami’s Vice President Muhammad Kamaruzzaman to death for crimes against humanity in connection with the 1971 civil war.

In a workers’ day demonstration in Dhaka, tens of thousands of factory workers demand that the owner of the collapsed factory building be sentenced to death (see April 2013).

Over 1,100 dead in a factory accident

More than 1,100 people, including a large proportion of female factory workers, are killed and thousands injured when a factory building on the outskirts of Dhaka collapses. The building contained several textile factories. After the accident, workers go into mass protests against the fact that the safety requirements are ignored by the builders and that the property owners do not follow the safety regulations.

Parliament unanimously elected Abdul Hamid as new President. Hamid belongs to the Awami League but is considered to have good relations with opposition parties, such as GDP.

As the judges fall into ICT, the conflict around the court’s legitimacy increases, and the contradictions spread to the streets. When Abdul Kader Mullah, a high-ranking leader of Jamaat-e-Islami, is sentenced to life imprisonment for crimes against humanity, mass demonstrations erupt in Dhaka for several days. Hundreds of thousands of people take part in the protests: some against Mullah being sentenced at all, some against receiving no death penalty.