+994 is the dialing code for Azerbaijan.

The oil and gas-rich Azerbaijan is located in the southeastern Caucasus, with the east coast facing the Caspian Sea. The former Soviet Republic has a close relationship with its powerful neighbor Russia. With Armenia in the west, war permits exist because of the Nagorno-Karabakh enclave. Azerbaijan is ruled as a dictatorship by the Aliyev family dynasty, and society is badly corrupt. Regime critics are often persecuted and sentenced to long prison terms. 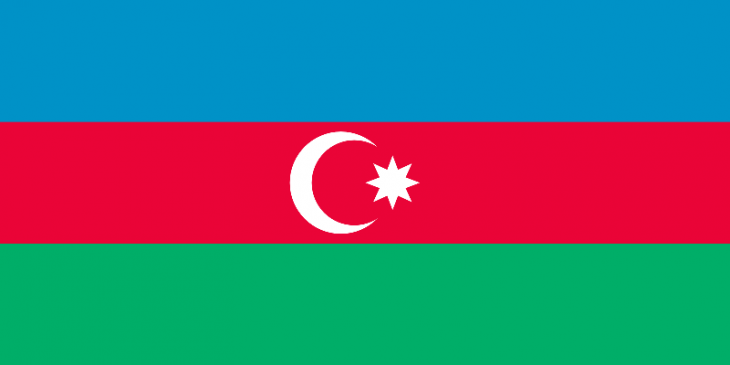 The South Caucasus was formerly called Transcaucasia, “the land beyond the Caucasus” – thus viewed from Moscow’s point of view.

Somewhere in the regions around the Caucasus, it is thought that Europe is separated from Asia. Here, however, there is no sharp natural boundary – neither geographically nor culturally – between the continents.

Azerbaijan is located in southeastern Caucasus, with coast to the east facing the world’s largest lake, the Caspian Sea. In the north, the country borders Georgia and the Russian Republic Dagestan.

According to the Constitution, Azerbaijan is a unified state, but two areas have had special status since the 1920s. The Autonomous Republic of Nachichevan (Naxçıvan) in the southwest is a 5,500 square kilometer area separated from the rest of the country. Nachichevan is sandwiched between Armenia and Iran, with a very short border in the northwest to Turkey. In contrast, within Azerbaijan itself lies Nagorno-Karabakh (see special section).

Nagorno-Karabakh was an autonomous oblast (area with a lower degree of autonomy) until 1991 when the Armenians living there proclaimed an independent state. Formally, however, Nagorno-Karabakh is still part of Azerbaijan. Armenian troops hold about a fifth of Azerbaijan’s land area occupied – in addition to Nagorno-Karabach, also a surrounding buffer zone and a mile-wide land corridor, the Latin corridor, to Armenia.

To the north, the Caucasus mountain range enters Azerbaijan. The country’s highest mountain is at the border of Dagestan. The end of the Caucasus can be said to be the considerably lower peninsula of Abşeron (Apsjeron) where the capital Baku (Bakı) is located. To the west, foothills of the Armenian Mountains, “Little Caucasus,” enter Azerbaijan and Nagorno-Karabakh. Nachichevan is also largely mountainous. Most of Azerbaijan, however, is lowland.

The central parts consist of dry but otherwise fertile plains around the river Kur (or Kura; in Georgia called Mtkvari), which flows throughout the country from northwest to southeast. In several places along Kur, dams have been constructed for irrigation and electric power generation. A tributary to the Kur is Araz, the border river to Iran in the south. On the mountain sides some forest grows, while the natural vegetation of the plains is often steep.

The climate is mostly temperate and dry, but with quite large differences between high and low countries.

In the lowlands, winters are mild and summers are often hot. The annual rainfall is usually 250–500 millimeters, but on the coast at the bottom of the south it rains considerably more.

Police and prosecutors raid the editorial board of Baku for US-funded Radio Free Europe / Radio Liberty. According to RFE / RL staff, computers and radio equipment are seized. Telephone and internet connections are switched off and staff are forced to leave the premises. The council is seen as yet another step in the ongoing crackdown on free media in Azerbaijan.

One of the country’s leading independent journalists, Xədicə İsmayılova, is jailed for two months, accused of having driven a colleague to attempt suicide by dismissing him. İsmayılova has received several awards for revealing corruption in the state administration. She faces up to seven years in prison. Amnesty International describes the arrest as obviously politically based. The arrest creates strong reactions internationally. The European Broadcasting Union EBU, as well as the Swedish public service magazines SR and SVT, are among those who protest against the arrest.

More money for the military

Parliament approves a sharp increase in defense spending in the budget for 2015. Increases in military spending by 8.6 percent to the equivalent of EUR 1.8 billion. The immediate cause is the worsening conflict with Armenia over Nagorno-Karabakh.

Helicopter is shot down

The Azerbaijani Army shoots down a Nagorno-Karabakh military helicopter that should have entered the Azerbaijani airspace. According to a statement in Baku, the helicopter was preparing an attack against Azerbaijani forces near the border of the breakaway republic. All three on board perish. Authorities in Nagorno-Karabach say the helicopter participated in an exercise and had no weapons on board. The shooting is described as the single most serious incident since the ceasefire formally entered into force in the area of ​​1994.

The Presidents of Azerbaijan and Armenia meet in Paris in a new attempt to breathe life into dialogue between the countries. The hope of a breakthrough is minimal after the summer battles along the border and around Nagorno-Karabakh, which required over 20 casualties. The two leaders agree to maintain the dialogue and to exchange information on persons reported missing in connection with the Nagorno-Karabakh conflict with the help of the International Red Cross Committee.

A court extends the detention period of human rights activist Leyla Yunus (see August 2014). She is to be detained until February 28, 2015. Two attorneys are reported to have been denied by the Prosecutor General’s Office on applications to undertake her defense.

Of all judging by foreign pressures, President Aliyev grants a number of democracy activists who were imprisoned earlier this year. Common to many of them is that they were convicted of non-political crimes such as drug possession and assault. Among other things, the United States must have argued to the regime that harassment against human rights organizations is unacceptable.

The UN Commission on Human Rights calls on the government to stop arresting and imprisoning activists on false or exaggerated grounds.

Putin is trying to mediate

Armenian and Azerbaijan leaders meet with Russian President Putin in Sochi to discuss the Nagorno-Karabakh conflict. Putin said after the meeting that both presidents expressed a desire to solve the problem. As the meeting goes on, the fighting continues and an Azerbaijani soldier must have been killed.

The toughest border battles in a long time

During two days of fighting along the border with Nagorno-Karabakh, 14 Azerbaijani soldiers are reported to have been killed, as well as three soldiers from the Armenian-dominated breakaway republic. The Presidents of Armenia and Azerbaijan agree on a soon meeting to try to cushion the conflict that has escalated significantly recently.

Two of the country’s most well-known human rights activists, the genuine couple Leyla and Arif Yunus, are being charged for cooperation with the Armenian security service. They are accused of conspiring with former arrested journalist Rauf Mirkadirov (see April 2014). Leyla Yunus is charged with treason, tax fraud, fraud and forgery, while her husband is charged with treason and fraud. Leyla Yunus has long worked with Armenian peace activists.

Two men are sentenced to life imprisonment for spying on Iran’s behalf. The trial is being held in front of closed doors and no details about the case are made public.

International concern over violence in the state of eruption

The Minsk Group (Russia, France and the United States) expresses “grave concern” over the escalating violence in Nagorno-Karabakh, including the intentional killing of civilians.

Concerns at the border

19-year-old opposition activist Omar Mamedov is sentenced to five years in prison for drug possession. The verdict is dismissed by his lawyer as politically motivated. Mamedov is a member of an opposition party and has criticized the government in a series of posts on Facebook. According to Human Rights Watch, it is a standard method for the authorities to trap opposers for drug possession. Small amounts of drugs are believed to be placed in their apartments by the police in connection with the house search.

Deaths at the border

Azerbaijan soldiers kill two Armenian soldiers at the border between countries, where tensions have increased in recent months. Since the turn of the year, a total of 14 soldiers have been killed.

Opposition journalist is sentenced to prison

The day after the country became President of the Council of Europe, journalist Pərviz Həşimli is sentenced to eight years in prison for illegal weapons possession. Həşimli, who is also a blogger, human rights activist and member of the Popular Front, says he was tortured in detention and that the verdict is politically based. He has been in custody since September 2013.

Azerbaijan takes office as chairman of the Council of Europe’s Council of Ministers on May 14, the weeks after the Council’s human rights commissioner harshly criticized the country’s regime. On the same day as the Presidency begins, the Human Rights Watch (HRW) calls on the Council of Europe to press Azerbaijan to release “government criticism on wrongful grounds and to implement comprehensive judicial reform”. According to the statement, over the past two years, the country’s authorities have brought at least 38 political activists, journalists, bloggers and human rights activists to justice after unfounded criminal charges. According to HRW, most of these are currently in prison.

Eight young democracy activists are sentenced to prison for between six and eight years for “planning of riots, hooliganism and possession of explosives and drugs”. Everyone is a member of the democracy organization Nida and was arrested in 2013 after organizing protest demonstrations in Baku.

Defamatory criticism from the Council of Europe

The Council of Europe’s Human Rights Commissioner Nils Muižnieks says that human rights are steadily weakening in Azerbaijan. He writes in a report that freedom of expression, assembly and association are being eroded continuously and describes how the authorities are engaging in unfair and arbitrary legal interventions against persons who have presented critical views. According to Muižnieks, journalists, bloggers and political activists are equally affected.

Journalist is accused of treason

A well-known journalist is accused of treason for spying on Armenia’s behalf. Journalist Rauf Mirkadirov is arrested the day after he was deported from Turkey, where he worked for several years for the Russian-language newspaper Zerkalo, which is published in Baku. He has criticized both the Turkish and Azerbaijani governments. He is to be held in custody for three months while prosecution is being prepared. The Committe to Protect Journalists organization describes the arrest as part of silencing independent reporting from Azerbaijan.

An adviser to Müsavat is sentenced to six years in prison for “hooliganism”. He is accused of abusing a war veteran. The verdict is regarded by the opposition as purely political. Human rights groups say 145 people are currently being held in prison for political reasons in Azerbaijan.

The leadership of the party Müsavat announces that it has decided to withdraw from the opposition alliance National Council (see Political system).