Albania is located on the Adriatic Sea and has a climate reminiscent of what is found in neighboring Italy and Greece. Albania was once perhaps Europe’s most closed country – but this is a thing of the past. Albania has approached the rest of Europe and has recently developed into an increasingly popular travel destination. However, the country is still a rather exotic destination and Albania’s culture and long history is still relatively unknown to most northerners. In addition to picturesque medieval towns, you will find beautiful mountain and coastal landscapes in a pleasant Mediterranean climate. Here you will also find good Albanian cuisine with influences from both Greek and Turkish cuisine. Albania is a joy for all the senses, but also for the wallet! Here you get value for money and can treat yourself to that little extra at surprisingly low prices. In addition, Albanians are very hospitable and foreign tourists are more than welcome! Join a round trip that takes you to perhaps Europe’s most unknown country, offering everything from Tirana’s rustic charm to rural idyll and new cultural experiences! 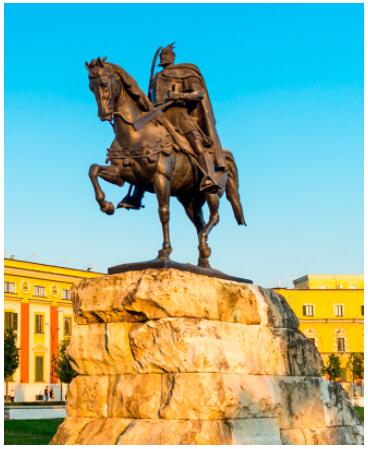 Day 1: Flight to Albania (Tirana)
After arriving at Tirana International Airport we are met by our local guide and go to our hotel in central Tirana. Overnight in Tirana.

Day 2: Tirana – Elbasan – Pogradec
After breakfast we take a city tour during which we will see Tirana’s main landmarks such as the Ethem Bey Mosque , the nearby Bell Tower and Skanderbegtorget . We also visit the National Museum and go for a walk through the Blloku district which under the rule of dictator Enver Hoxha was closed to ordinary citizens. Here lived the privileged elite and the members of Albania’s Politburo. However, the area has undergone major changes since then and is today one of the most interesting and trendy neighborhoods in Tirana with lots of popular cafes, restaurants and shops. The journey continues towards the city of Elbasan where we visit the famous castle that was built in the 15th century during the Ottoman period. Today’s end goal is Pogradec on Lake Ohrid, one of Albania’s most charming tourist resorts with wonderful views of and the clear waters and surrounding mountains. Lake Ohrid is one of Europe’s oldest and deepest lakes and has been on the UNESCO World Heritage List since 1979 and has a completely unique ecosystem. In the afternoon we visit Drilon National Park just outside Pogradec. Overnight in Pogradec. (Breakfast and dinner.) 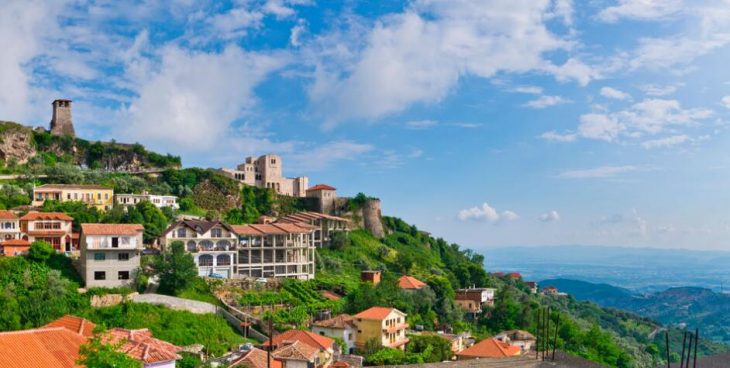 Day 3: Pogradec – Voskopoje – Korce
After breakfast we head to the mountain village Voskopoje just west of the residence of Korce in southeastern Albania. Voskopje, perhaps better known by its former name Moscopole, had its heyday in the mid-18th century and was an important city of culture and commerce before being destroyed and depopulated in the latter half of the same century after a series of raids. A majority of the city’s population belonged to the Aromanian (Vlacher) ethnic group, and here you can still find the cultural heritage they left behind in the form of beautiful old churches with some of the finest murals in all of Albania. The mountain landscape is also fabulously beautiful! We continue to Korce at the foot of Mount Morava. The city is today the busiest city in southeastern Albania with just over 70,000 residents and has long been an important hub for trade contacts in the region due to its strategic location not far from the border with Greece and Macedonia. In Korce, we take a city tour of the older city center known for its fine architecture – the city is widely regarded as one of Albania’s most beautiful cities. We also visit the Mirahori Mosque built in the late 15th century. Overnight in Korce. (Breakfast and dinner.)

Day 4: Korce – Erseka – Benje – Permet
After breakfast we head to the smaller town of Permet in southern Albania, known for its greenery, folk music, winemaking and proud food traditions – here is perhaps Albania’s foremost raki and also various kinds of jams and sweets such as the Albanian specialty glico. During the journey, we make a short stop in the smaller mountain town of Erseka, which is Albania’s highest city (1,050 m.). Then we stop at a farm at the edge of a beautiful forest for a short tour of the property. During the journey you will also see one of Albania’s most famous bridges – the arched Ottoman stone bridge in the village of Benje . The area is also known for its bathing facility with hot springs and those who want can take the opportunity to take a relaxing bath. Overnight in Permet. (Breakfast and dinner.)

Day 5: Permet – Gjirokaster – Dhoksat – Gjirokaster
After breakfast, we head to Gjirokaster, whose older city center is fabulously beautiful and is on the UNESCO World Heritage List. Among the city’s unique architecture, you will find clear elements of Ottoman 17th century architecture, but there are also buildings built during the 19th century where inspiration was taken from elsewhere. During our city tour along the city’s steep cobbled streets, we get to know more about the region’s history and unique culture. We visit the main sights, including two museums inside the walls of Gjirokastraborgen. The castle is located on a hill above the city and along its slopes winds white houses with characteristic stone roofs and wooden balconies. It’s hard to imagine that Albania’s dictator Enver Hoxha was actually born in this beautiful old city! During the day we also make an excursion to the mountain village Dhoksat where we visit a local household and get to see the kitchen garden before we eat a homemade lunch . Overnight in Gjirokaster. (Breakfast and dinner.) 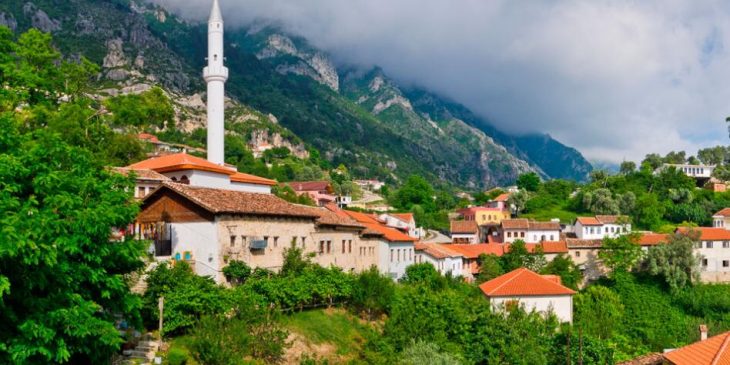 Day 6: Gjirokaster – Butrint – Llogora
After an early breakfast we head to the archeological site Butrint which is on the UNESCO World Heritage List. The ancient port city of Butrint in southern Albania was founded as a Greek colony and later under Roman rule under its Latin name Buthrotum. During antiquity, the city was an important center for trade and religious practice and here was, among other things, a temple dedicated to the god of medicine Asklepios. We travel along the “Albania Riviera”, known for its beautiful coastline towards the Ionian Sea and make a stop for sunbathing and swimming for those who so wish. Overnight in Llogora. (Breakfast and dinner.)

Day 7: Llogora National Park – Berat
After breakfast we go for a walk in Llogora National Parks beautiful surroundings, not far from the place where Julius Caesar’s and Pompey’s armies met in a battle of 48 BC. and where indeed Pompey departed victorious. We continue to the ruined city of Apollonia , named after the Greek god Apollo. The city was built in the 6th century BC and once had 70,000 residents living inside the old city walls. The ruins of the ancient city in the Albanian natural landscape are a magnificent sight! We then head to the city of Berat in central Albania, a UNESCO World Heritage Site known for its well-preserved architecture. Along the slopes of the city, bands of white Ottoman-style houses wind their way up to the city’s fortress on top of a mountain. Overnight in Berat. (Breakfast and dinner.)

Day 8: Berat
During the day we go on a journey of discovery in the beautiful old city that has been described as “the pearl of Albania” and “the city of a thousand windows”. Among other things, we visit St. Mary’s Church with its famous icon museum and one of the city’s most famous mosques. Overnight in Berat. (Breakfast and dinner.)

Day 9: Berat – Durres – Kruja
After breakfast we go to Albania’s second largest city Durres on the Adriatic coast. Here you will find not only the country’s most important port but also some of the country’s main attractions. Durres was founded in the 6th century BC as a Greek colony and became the capital of the Roman province of Epirus Nova in the 4th century. During the day we visit, among other things, a Roman amphitheater which held 20,000 spectators and was the largest Roman arena in the Balkans. We then continue to the cultural city of Kruja , beautifully situated among high mountains at 600 meters above the Adriatic Sea. We visit the city’s famous castle , the oldest parts of which are believed to be from the 5th century. The castle was an important fortification during the Albanian national hero Skanderbeg’s war against the Turks in the 15th century. We visit the castle and the famous Skanderbeg Museum which is located inside the walls, as well as the nearby ethnographic museum housed in a beautiful old building built during the latter half of the 18th century. Near the castle is a famous base rstråk where you can buy antiques, carpets and handicrafts. In the evening we get to taste the area’s raki and cheese before the farewell dinner with local specialties. Overnight in Kruja. (Breakfast and dinner.)

Day 10: Return
We leave for the airport in Tirana early in the morning before returning home. 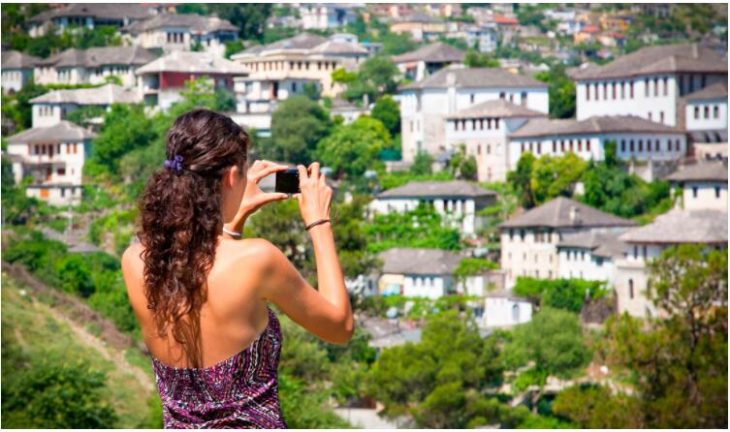