+374 is the dialing code for Armenia.

Armenia is a mountain country in the southern Caucasus with an ancient Christian culture. The country is sandwiched between the Muslim neighbors Turkey and Azerbaijan and has very strained relations with both of these countries. Throughout history, Armenia has suffered from a variety of empires. From 1920 until independence in 1991, the area was a sub-republic in the Soviet Union. The country is still heavily dependent on Russia, both politically and economically. 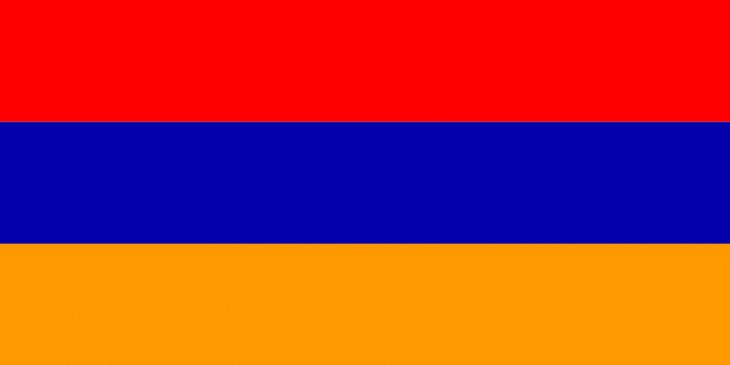 The South Caucasus was formerly called Transcaucasia, “the land beyond the Caucasus” – thus viewed from Moscow’s point of view.

Traditionally, the Caucasus has been considered to be the border between Europe and Asia. Here, however, there is no sharp natural boundary – neither geographically nor culturally – between the continents.

Armenia is a highland. Half the land area is higher than 2,000 meters above sea level. The terrain is richly varied with high plateaus, extinguished volcanoes and deep cut river valleys. Through northern Armenia, a mountain range extending from the south goes along the border with Azerbaijan to the east.

In eastern Armenia there is also Lake Sevan, which is about the same size as Lake Mälaren. It has shrunk considerably since it was regulated for power plant construction in the 1930s. Sevan is located about two kilometers above the surface of the world sea. In the southwestern part of the country is a high plateau, which gradually descends towards the area around the capital Yerevan.

At high altitudes, vegetation is steep, while it can be very lush in the river valleys and in the comparatively low-lying area around Yerevan.

Armenia is in an earthquake zone and was hit hard by a severe quake in 1988.

Armenia has a marked inland climate, ie dry with hot summers and cold winters. However, both temperature and rainfall vary widely between different parts of the country depending on the large elevation differences.

Armenia’s defense minister says that the country will henceforth “respond to any Azerbaijani provocation with immediate retaliation”.

Helicopter is shot down

The Azerbaijani Army shoots down a Nagorno-Karabakh military helicopter that should have entered the Azerbaijani airspace. According to a statement in Baku, the helicopter was preparing an attack against Azerbaijani forces near the border of the breakaway republic. All three on board perish. Authorities in Nagorno-Karabach say the helicopter participated in an exercise and had no weapons on board. The shooting is described as the single most serious incident since the ceasefire formally entered into force in the area of ​​1994.

The Presidents of Armenia and Azerbaijan meet in Paris in a new attempt to revive the dialogue between the countries. The hope of a breakthrough is minimal after the summer battles along the border and around Nagorno-Karabakh, which required more than 20 casualties. The two leaders agree to maintain the dialogue and to exchange information on persons reported missing in connection with the Nagorno-Karabakh conflict with the help of the International Red Cross Committee.

Protests after membership in Customs Union

Armenia formally joins the Russian-led Customs Union, which from 2015 will be deepened through the formation of the Euro-Asian Economic Union. President Sargsyan signs the agreement at a regional summit in Minsk, Belarus. On the same day, more than 10,000 supporters of the opposition in Yerevan demonstrate against the government for its inability to curb poverty and corruption. A week later, around 16,000 people are reportedly gathering in central Yerevan to demand fresh elections.

Armenian and Azerbaijan leaders meet with Russian President Putin in Sochi to discuss the Nagorno-Karabakh conflict. Putin said after the meeting that both presidents expressed a desire to solve the problem. As the meeting goes on, the fighting continues and an Azerbaijani soldier must have been killed.

International concern over violence in the state of eruption

The Minsk Group (Russia, France and the United States) expresses “grave concern” over the escalating violence in Nagorno-Karabakh, including the intentional killing of civilians.

The OSCE expresses its concern that a court ordered a newspaper and an internet site to reveal what sources they had for their report on the investigation against a police officer accused of violence. The OSCE fears that the decision may discourage reporting on issues of general interest. So far, both media have refused to obey the court’s order.

Soldiers are killed at the border

Two Armenian soldiers are killed at the border with Azerbaijan, where tensions have increased in recent months. Since the turn of the year, a total of 14 soldiers have been killed.

The Pension Act falls to the Prime Minister

Prime Minister Tigran Sargsyan resigns. He does not justify the decision, but his government has been severely criticized since the pension reform in January. A few days before Sargsyan’s departure, the Constitutional Court says that pension reform must be changed. Hovik Abrahamyan, who has been President of Parliament so far, is appointed as new Prime Minister. He is also the Vice Chairman of the ruling Republican Party.

About 6,000 people in Yerevan demonstrate that everyone born after 1974 as of the turn of the year must deposit five percent of their income on private pension funds. The law is perceived by many government critics as a way for the authorities to use their money.