+355 is the dialing code for Albania.

Albania is a small mountainous country on the Balkan Peninsula with coast towards the Adriatic Sea. The majority of the population are Muslims. Since the early 1990s, Albania has evolved from an isolated and impoverished country, ruled by a Stalinist communist regime, to a nation with an open economy and membership in the NATO defense alliance. Albania was given the go-ahead to launch negotiations with the EU in 2020, although membership is still expected to take several years. 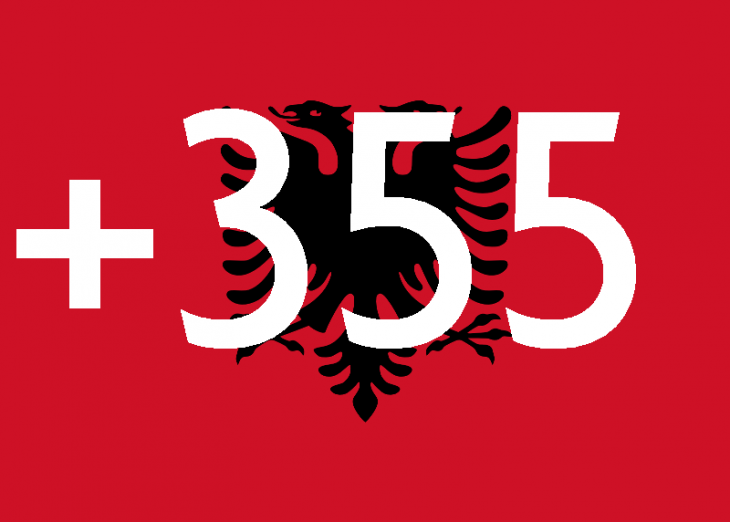 Three-quarters of Albania’s surface is occupied by mountains. A little over a third is covered by forest, which mainly consists of deciduous trees. The country’s average height is just over 700 meters above sea level. The mountain ranges mostly run in a north-south direction and are separated by densely populated valleys or plains.

The lowland between the coast and the mountains is on average about five miles wide. The over 40 km coast to the Mediterranean is mostly sandy with few natural ports.

Albania has in the western Mediterranean climate with hot and dry summers and mild and humid winters. The climate in the mountainous eastern parts is characterized by abundant rainfall, cold winters – the temperature in the northeast can drop to 20 minus degrees – and hot summers.

More than two months after the parliamentary elections that gave the Socialist Party its own majority, Prime Minister Rama presents a new government. The number of ministerial posts is reduced from 20 to 14 by merging several ministries. Most ministers were part of the old government but in most cases are given new assignments. Four ministers are brand new. The new government receives as many female and male ministers. Rama says that the government’s most important goal is to raise economic growth from 3.8 to 5 percent during the four-year term.

The newly elected President Ilir Meta (see April 2017) takes office at a ceremony in Parliament. The 48-year-old new head of state has participated in several governments following the fall of communism in the early 1990s, including as prime minister, in two rounds as vice prime minister and also as foreign minister.

The Socialist Party clearly wins in the parliamentary elections. The party receives just over 48 percent of the vote, which allows it to continue to govern on its own. The Democratic Party gets just under 29 percent, while the Socialist Movement for Integration, which was a member of the latest government, gets just over 14 percent of the vote. The Socialist Party thus receives 74 of the 140 seats. The election is carried out without more serious incidents, although there are numerous reports of voting and threats to voters. The turnout of 45 percent is a disappointment, which is not only blamed on a heat wave and the end of the fixed month of Ramadan. A widespread dissatisfaction with the parties and their inability to significantly raise the standard of living of the population is also believed to have been recorded.

No partial alliances in this year’s elections

Ahead of the June parliamentary elections, the two major parties, the Socialist Party and the Democratic Party, have decided not to form alliances with smaller parties as in the last election. This means that small parties can find it difficult to pass the 3 percent barrier to being represented in Parliament. A new law that has come into force before the impending election could give up to seven years in prison for voting, selling fake ID cards or for police officers trying to harness their power to influence voters.

Following mediation by the US and the EU, the government and the opposition agree on a solution to the political crisis, which means that all parties promise to stand in the upcoming parliamentary elections. The settlement means, among other things, that the election is postponed one week to June 25 and that representatives of the opposition receive seven ministerial posts, several executive positions for government agencies and also the highest responsibility for the election commission. However, the opposition does not get through its demand that Prime Minister Rama must resign before the election. The work of creating a parliamentary commission to examine all the country’s judges and prosecutors will also begin.

Journalist is arrested for murder threat

A journalist is arrested after calling on Facebook for murder of the head of the EU delegation in Albania, Romana Vlahutin. The journalist wrote that “every Alban who loves his country has the right to kill Romana, and that would be considered an act against the terror, not a terrorist attack”. Vlahutin has been heavily employed in opposition media since taking up the post in 2014, as she has expressed strong support for the judicial reforms that the government and the EU support but which the bourgeois opposition opposes.

No solution to the crisis before the elections

Albania’s political leaders fail to reach a compromise on how to run the June parliamentary elections. The government offers the opposition to participate broadly in an international surveillance force with the participation of representatives of the EU, the US and the OSCE, but opposition leader Lulzim Basha is adhering to the demand that the election be conducted under a neutral temporary government. The opposition is accusing the Socialist-led government of links to organized crime and of buying votes for money from drug trafficking.

In Parliament’s fourth attempt to elect a new president, the ruling majority for the first time appoints a candidate, the 48-year-old former prime minister (1999-2002) Ilir Meta. He gets 87 votes, which is enough to get elected. Meta leads the government’s smaller party, the Socialist Movement for Integration (LSI), which he formed in 2003 after leaving the Socialist Party. During his long political career, Meta has been persecuted by charges of corruption, abuse of power and voting fraud.

The first attempt by the Albanian parliament to elect a new president fails. Prime Minister Edi Rama says the government has refrained from bringing forward a candidate in an attempt to get the opposition to cooperate on a joint candidate. The opposition has been boycotting Parliament since February. The government has a sufficient majority to be able to elect a president on his own. If no president can be appointed after five rounds of elections, Parliament must be dissolved and new elections announced. The next parliamentary elections are already postponed until June 18, but the opposition threatens to boycott it.

The Democratic Party (DP) and other opposition groups that are close to the party are threatening to boycott the parliamentary elections on 25 June. They demand that a transitional government be appointed to lead the country up to the elections. According to the opposition, the only option is to guarantee a free and honest election. When the deadline for registering participation in the elections expires, 32 parties have signed up, but not the DP and several other opposition parties. Prime Minister Rama says the boycott is a way for the opposition to sabotage Albania’s opportunities to approach the EU.

Government reform before the election

the 13th of March

Prime Minister Rama replaces four ministers with the statement that he wants to sharpen the government ahead of the June parliamentary elections. He rejects all speculation about concessions to the coalition partner LSI. Those who are replaced are the Home, Health, Social and Municipal Ministers.

Lulzim Basha is being arrested by police and charged with rioting after, according to police, calling for acts of violence against state institutions. If he is prosecuted and sentenced, he faces up to three years in prison.

The Democratic Party (DP) is launching a boycott of Parliament’s work until it receives a demand for a politically independent expert government to lead the country until the June 18 election. The boycott may mean that Parliament cannot appoint the International Commission of Experts to examine all judges and prosecutors. As a requirement for EU membership negotiations with Albania, the EU demands that the independence of the courts be guaranteed and that the country adheres to the OSCE recommendations for free and fair elections. Such reforms must be adopted by September at the latest.

Albanian police arrest 18 people during raids against human traffickers. According to prosecutors, they have smuggled refugees from North Africa and the Middle East via Albania to mainly Germany and Austria.