As one of the 50 American states, Alabama stands out for its mineral resources and reserves of coal, oil and natural gas.

Alabama is an American state located in the southeastern region of the United States. The state is limited to the north with Tennessee, to the south with the Gulf of Mexico and to Florida, to the east with Georgia and to the west with Mississippi. The state capital is Montgomery, and the largest city is Birmingham.

The region of Alabama was initially dominated by the French until 1763, when it passed to English control. Later, in 1783, the territory was annexed by the Americans, who raised Alabama to the status of State in 1819. In 1861, it became part of the Confederate States of America, having fought during the American Civil War against the other States of the Union. After the defeat of the Confederates, Alabama was readmitted to the Union in June 1868.

With a region of a size equivalent to that of the Iberian Peninsula, Alabama has about 65% of its territory covered by forests. The state is rich in mineral resources, such as bauxite and magnesium, for example. Its climate is temperate, with average temperatures of 26 ºC in the summer and 7 ºC in the winter.

Alabama’s economy is based, in decreasing order of importance, on industry, commerce and the service sector. Its reserves of oil, coal and natural gas provide good conditions for the development of the steel industry. The main goods produced in the state are clothing, paper, rubber and plastic products. Tourism is also another significant source of income for the same.

The population of Alabama has grown by 8.1% since 1990, a clear consequence of strong immigration, mainly from Latin Americans.

Map of Area Codes in Alabama 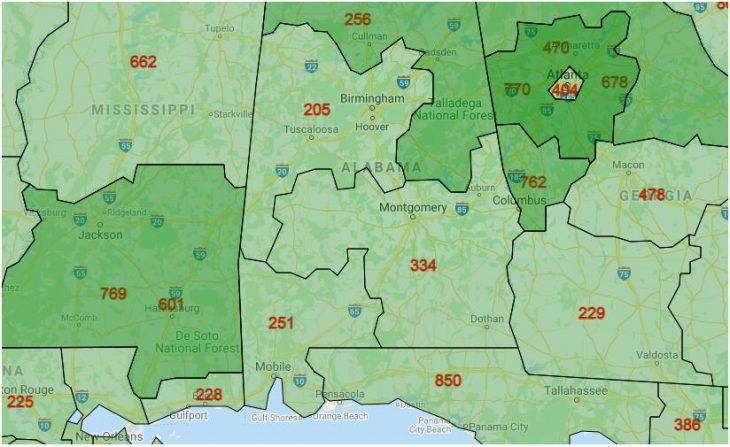 Alabama consists of the following area codes. Click on the area code to show the cities in that area code.

The following 21 counties use area code 205.

The following 9 counties use area code 251.

The following 32 counties use area code 334.

The following 15 counties use area code 938.